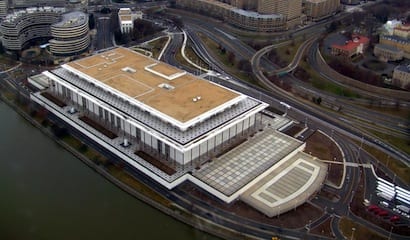 MY MAKEUP artist, the charming Renae, told me a few weeks ago that I had not lived until I watched House of Cards, a TV series on Netflix about life in the high reaches of Washington power.

After fantastic struggles to sign on to Netflix, I got going on the series and it left me cold as ice, even revolted, until I saw one little sequence where the cunning representative from South Carolina with the off-again, on-again Southern accent is walking into what is supposed to be (maybe is) the Kennedy Center for a concert. Suddenly, the Proustian tea leaves hit my big nose, and I was transported back to Washington long ago.

Kevin Spacey and his terrifying, blood-curdling wife are walking into a box at the Kennedy Center. Back in the Nixon/Ford days, when my Pop, long deceased, was chairman of the Council of Economic Advisers, we would often get to use the White House box at the Kennedy Center. He and my mother would take my wife and me, and then when my wife and I were divorced (later to remarry), my girlfriend, C.

I cannot recall everything I saw there. I do remember the original run of Jesus Christ, Superstar, which was fantastically good. I recall The Who’s Tommy, which left me electrified and probably as high as a kite. I recall symphonies, but not very well, probably because even then I tended to fall asleep during symphonies.

My most vivid memory is of taking a super-smart young woman from Madeira to see a show there and asking her what she thought of it and of the evening. “I think you’re a really ambitious Jewish man who’s going to go places,” she said, and we did.

The White House box had its own small bathroom and eight seats. When one sat in it, people craned their necks to see who it was. In our case, no one particularly important. This brings back another memory: My father used to get an invitation to the Queen’s birthday party at the British Embassy on Massachusetts Avenue and twice took me. At the time, I had shoulder-length Jew-fro hair and a long, droopy mustache, like a refugee from the Haight who happened to drop in. Sally Quinn, even then known as a playuh in journalism, asked what this said about me. “To be at a party like this with hair like yours, you must be someone important,” she suggested.

“No, I’m not at all,” I said. “My father is chairman of the Council of Economic Advisers and he just brought me along. I’m a lowly regulatory lawyer. I’m not important at all.”

“You’re right,” she said, and walked away.

That’s the Washington I hate. The Washington of class and power and status. When I did become the tiniest bit important as a speechwriter and lawyer for RN, at the frequent White House parties in the social room down the hall from the East Room—what the hell was it called?—everyone was always looking for a more important person to talk to. More fun to just go back to my office and watch The Young and the Restless on TV. No fun playing the status game, at least at my level of status. Later, it changed.

THE WASHINGTON I grew up in was all about power and class. Bear in mind, I grew up there a long time ago. I was born in November of 1944, way too long ago. There were clear social classes. At the very bottom were the blacks, or “the colored” as they were called then. They were so far down the social and power totem pole that they might not have been human.

In the newspaper classifieds, apartments and houses for rent were listed as for “white” or for “colored.” When crimes were reported, the suspects were written up almost always as “colored” or just “col.” Their neighborhoods started east of 16th Street, north of Mass. Avenue, and hardly anyone white ventured there. The schools were in pitiful disrepair. The children looked so desperately sad it broke my heart to see them sweltering in the cruel D.C. heat of August.

Then, at the very top, were the rich, white, socially and politically connected members of the establishment. Think of Dean Acheson. Think of St. Alban’s School parents when St. Alban’s school took almost no one but the sons of the Social Register. Think of Mrs. Agnes Meyer, whose husband, a Jew, was so rich and owned so much of the Washington Post that she was as close to the pinnacle of Washington Society as one could be—higher even than the party-giving Perle Mesta (the original Hostess With The Mostest) or the fabulous Gwen Cafritz.

Think of the Chevy Chase Club, where the membership—all white, all Gentile—might as well have slit their wrists on the 18th green as had a Jew in their midst. They were by no means all rich, certainly not all important in political circles, but they were of good family, as one might have said.

And then below were the toiling masses of bureaucrats, who got their computer-generated paychecks every other week and put them in the front pockets of their white short-sleeved shirts from J.C. Penney until they deposited them. They, the masses of the bureaucracy, might as well have been invisible to the party-giving elite showcased in what the Post then unashamedly called  the “Society” section.

My family was not in that group. My father was research director for the Committee for Economic Development, a group of high-level businessmen (think the CEOs of U.S. Steel and GM and Ford, and you have the idea). He wrote policy statements for them about labor, about trade, about education, about defense. And he got to share—in a small way—in their lavish ways of life, although in pay he was much closer to, say, a partner at a law firm in D.C., although nowhere near the very top level. He did not carpool or take the bus and he always had an expense account. But we were far from rich. When I was a teenager, I could get lunch of chopped steak at Duke Zeibert’s, the most “in” place in D.C., for less than a dollar. We lived in Silver Spring, in a beautiful mid-century modern—but we were in Silver Spring, not Wesley Heights, because Jews could not live in Wesley Heights. (Can you, dear reader, even believe that until I was 30 years old, Jews and Blacks and Asians could legally be kept out of neighborhoods?)

My father never flew anything but first class—but when the Broadway shows came to D.C.’s National Theatre before opening in New York, we sat in the second balcony, where the floors were uncovered concrete as compared with the carpeted floors below. “Your friends’ parents don’t take their kids at all,” my mother would say when I complained.

And what shows they were: Guys and Dolls, South Pacific, Our Town, Call Me Madam. The greatest of the great, and I was a dope to complain about where I sat.

My father would come back from his business trips with souvenirs of first-class travel and matches from the Waldorf and the St. Regis in New York. That inspired my dreams. (“A taste of honey,” says the song, “is worse than none at all,” and the taste of honey that I saw in his life has poisonously fueled my love of extravagant living all of my life.)

WASHINGTON AND ITS social class games changed for me when I became a hippie type—disdained by Sally Quinn, to be sure, but loved by the girls I taught at American University because of my “wraith-like quality of menace,” as a close friend put it last week, and my access to drugs in a world in which drugs and menace were the coin of the realm. Who cared if Sally Quinn thought I was a nobody as long as the girls liked to ride in my ’62 Corvette? As long as young women wanted to be near me because I was so thin and so hip, who cared who was who at the Queen’s birthday party? D.C. became my playpen.

But then it changed again when it became toxic to love Nixon. I left and never came back full time. I still have an apartment (two, actually) at the Watergate, and I often think I am the last person to have had any connection with Watergate (as a speechwriter and lawyer for RN) to actually live there, even part time.

But I come back often to see the Eastern Shore, and the Washington I see now is a much better place than it was.

The blacks have come into their own and, basically, they own the town—and they should. Women are known for other assets than how much money their husbands have or their parents left them. Women do things that matter instead of just giving parties where status cuts like a straight razor.

And I get recognized and asked to pose for photos on M Street with cute little students from Georgetown who have the map of Ireland on their faces. And back at my apartment at the Watergate, my wife lies next to me and reads mysteries while I dream about the days when I had a “wraith-like menace” in Washington, long ago.