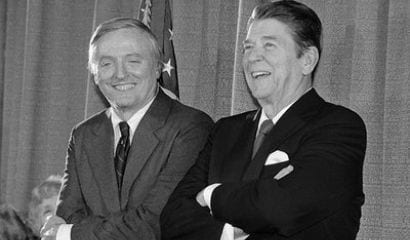 The Heritage Foundation picked up the challenge.

Mark Levin wants to see this debate as well.

It’s time — past time — for a full and open discussion in the conservative family about immigration. To stop with the sound bite presentations. To put an immediate stop to the idea of comprehensive immigration bills zipping through Congress with all the usual backdoor wheeling and dealing.

It’s time for a William F. Buckley-esque debate between conservatives that finally and quite publicly puts those involved with the issue together on one stage at the same time. Puts them there for an open, televised, candid, and serious discussion of a seriously momentous issue for the future of America. An issue that is being shoved through Congress with all the speed of a rocket accompanied by the usual Washington bipartisan game playing and theatrics.

The Heritage Foundation is precisely the right venue for this.

The participants? Levin suggests Heather Mac Donald, Ed Meese, and either or both Ted Cruz and Jeff Sessions for one side.

Surely there are other suggestions for each side.

As mentioned the other day, we like Congressman Ryan here and thought he was a great addition to the 2012 GOP ticket.

It makes no sense. None. Ryan is far too trusting of the government’s ability to accomplish complicated tasks, a trust that simply isn’t borne out by the facts. As we have documented repeatedly here, and will continue to document, whether talking the IRS, the NSA, the Justice Department, Obamacare and on and on, the idea of big, complex government has repeatedly shown itself to be an utter failure.

House Republicans — and that doesn’t even take in the disaster that is the Senate’s Gang of Eight where Lindsey Graham has stunningly revealed that his goal is to mimic liberals and play racial politics to get into the “good graces” of one racial group — are headed for disaster. House Republicans can’t even muster the will to defund Obamacare — and they control the purse strings!

What part of “secure the border first” do these people not understand?

Does anyone really believe Republican members of the House have read their own bill? Much less the Senate bill?

As Levin said in the lead-up to his interview with Ryan, these are Rube Goldberg confections, a maze of complicated if-this-and-if-that’s which are destined for massive, inevitable failure — with drastic consequences. Congress has shown itself utterly incapable of focusing on one thing at a time.

Let’s go back in time a moment.

Ronald Reagan is delivering his last State of the Union speech. Along the way, he talks about the congressional addiction to sending comprehensive bills to him, which he then proceeds to illustrate. As seen here in this video from the Reagan Foundation, at about 15:50 in the speech Reagan turns to his right and as the camera pulls back he lifts aloft, with difficulty, three different pieces of legislation that individually ran to over a thousand pages and weighing as much as fourteen pounds. The Congress roars with laughter — even the Democrats — as Reagan lifts each towering mass of papers one at a time, finally shaking his wrist as if it hurt to lift them. Explaining what each “bill” was supposed to contain, Reagan finally says that if Congress sends one of these monstrosities to him again, he won’t sign it.

The entire Congress jumps to its feet, laughing and cheering.

But, of course, Reagan is long gone and Congress is at it again. Egged on by President Obama and the mentality so well expressed by Nancy Pelosi on Obamacare: “We have to pass the bill so we know what’s in it.” This time all those pounds of pages are filled not with incomprehensible gobbledygook about health care but with incomprehensible gobbledygook about immigration.

Ryan appeared on the Levin show Tuesday night and unfortunately only added to the impression that he is contributing to what Reagan saw as a serious problem within Washington. Worse still that Ryan and his GOP colleagues in House and Senate are adding to this problem by playing with the fire that is the subject of immigration.

It’s time to get this subject all out there on the table , and Levin’s suggestion that one of the people involved in this debate should be Heather Mac Donald is an outstanding thought.

Heather Mac Donald is the John M. Olin fellow at the Manhattan Institute, like Heritage a conservative think tank. Ms. Mac Donald has done extensive work on the immigration issue. Her Institute bio notes: “Her most recent book, The Immigration Solution: A Better Plan Than Today’s, coauthored with Victor Davis Hanson and Steven Malanga, chronicles the effects of broken immigration laws and proposes a practical solution to securing the country’s porous borders.” It was Mac Donald’s appearance on his radio show that helped launch Levin’s request for a serious, Buckley-style debate among conservatives.

Mac Donald has done yeoman work on the immigration issue, and discusses that work here in an appearance last week on Levin’s show. She dissects Jeb Bush’s stance on immigration with a scholarly scalpel, discussing the differences among Hispanic immigrant groups and more. She goes on, detailing the Gang of Eight bill’s “attack on the rule of law,” zeroes in on the false idea that immigrants are required to learn English. (They have to take a class. I took French class. Suffice to say I am not fluent.)

“They don’t have any intention of securing this border, do they?” Levin asked her. To which Mac Donald notes the negative Senate votes on measures to secure the border introduced by Senators Jeff Sessions (R-AL) and Chuck Grassley (R-IA).

In short, Mac Donald is exactly the person to be sitting across from Jeb Bush, Paul Ryan, Marco Rubio, and any other GOP advocate of these bills.

So too is former Reagan Attorney General Edwin Meese III, Ronald Reagan’s attorney general at the time the 1986 immigration “reform” was passed. Meese, who wrote this scalding letter to the editor of the Wall Street Journal. Writing separately at the Heritage Foundation, here, Meese drew on his experience with the issue to say this:

The 1986 reform did not solve our immigration problem — in fact, the population of illegal immigrants has nearly quadrupled since that “comprehensive” bill.

Why didn’t it work? Well, one reason is that everything else the 1986 bill promised — from border security to law enforcement — was to come later. It never did. Only amnesty prevailed, and that encouraged more illegal immigration.”

Add in in Senators Cruz and Sessions, two of the Senate’s best on this issue, and the discussion with Ryan, Bush, Rubio and Christie would only need popcorn.

Heritage, it should be noted, has specifically indicated a willingness to host an immigration debate.

Ryan had said the other day that he would be willing to “debate anybody who tries to suggest that these ideas that are moving through Congress are amnesty.”

Replied Michael Needham, the Heritage chief executive officer in a post titled “Sorry, Chairman Ryan, It is Amnesty,” “That is a conversation we would welcome.”

Then let’s have that conversation.

Oh yes. The conversation needs a moderator. Somebody who moderates lots of televised discussions would be in order, somebody who has frequently discussed the immigration issue in detail.

Hmmm. Does the name Sean Hannity ring a bell? Hannity is completely and repeatedly on the side of “secure the border first.” Suggestions otherwise are as bizarre as they are bogus. But he is scrupulously fair, many of these suggested participants on both sides have been on his television and radio shows, Rubio only last night. He would be the ideal moderator to talk with a Ryan, Rubio, Bush, and Christie on one side and a Mac Donald, Meese, Cruz, and Sessions on the other.

And while we’re at it? Somewhere in this discussion — a suggestion Mark Levin did not make — is some role on one panel for…Mark Levin.

But they have responded appropriately to Congressman Ryan’s challenge.

With these Senate and House immigration bills speeding along the tracks, now is the time.

A phrase from Ronald Reagan comes to mind:

If not now, when?