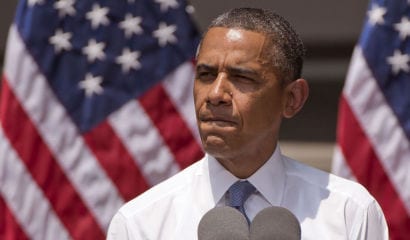 President Obama’s Administration is beginning to feel like one endless freshman orientation, you remember the kind where they used to sit you down the first week of college and tell you you’d been oppressing blacks and women all your life and had to spend the next four years doing penance?

Four years ago he began his Inauguration by announcing that fossil fuels were a thing of the past and that we would now get our energy from “wind, sun and soil.” He spent the next four years trying unsuccessfully to push cap-and-trade through Congress and subsidizing a bunch of scraggly “renewable energy” projects that haven’t produced much of anything except a few notable scandals.

Now with unemployment still pushing 8 percent, with participation in the work force at a historic low of 62 percent, with the economy limping along in a five-year doldrums, and with the financial system starting to tremble as Ben Bernanke lets up the pressure on interest rates, the President has decided to stake his second term on — another initiative against coal! This time there isn’t even any blather about “creating jobs” or “building a new economy.” We’re just going to punish ourselves, pure and simple. Coal plants are going to shut down, electricity prices are going to soar, people are going to be put out of work, but that’s just too bad. We’ve sinned by putting “toxic” carbon dioxide into the atmosphere — even our very breathing implicates us! — and we’re just going to have to suffer the consequences.

There are several things that can be said about this. First, if coal plants are shut down, what is going to take their place? The reflexive answer is “natural gas.” Wholly against his inclinations, President Obama has managed to preside over the greatest fossil fuel revival in American history. Production of gas and oil have soared to new heights so that talk about scarcity and “peak oil” are almost forgotten. All of this, of course, has taken place on private lands, in the midsection of the country, outside the purview of federal regulations, far from Washington, so that the country is being divided more and more into the productive breadbasket west of the Appalachians and east of the Rockies, and the “consuming” centers of the East and West Coasts that want to drive away anything to do with energy production from their borders.

Fair enough. Let New York and California ban fracking, outlaw coal, close nuclear reactors, pay exorbitant prices for their electricity and watch their industries leave for Colorado and Texas. But the output of this new energy bounty is not unlimited. A year ago the price of natural gas sunk below $2 per thousand cubic feet (mcf) and gas briefly pulled abreast of coal, generating 34 percent of our electricity. News went out that the Age of Coal was ending and the new Era of Natural Gas being ushered in. But then a funny thing happened. Gas climbed back up to $3 per mcf and right away the trend reversed. The latest figures from the Energy Information Administration show coal has climbed back up to 40 percent of our electricity while gas has subsided back to 28 percent.

In other words, all this gas is a sometime thing. It’s easy to throw up a gas plant and take advantage of low prices because construction constitutes only 10 percent of the cost of a gas plant while the fuel accounts for the other 90 percent. But that same logic works in reverse. When the price of gas goes up, gas-powered electricity becomes enormously expensive and gas plants are easy to shut down because they represent so little investment. Now with talk of exporting gas and maybe even using it in our cars, the price of gas is going to be yo-yoing into the foreseeable future. The Heritage Foundation predicts prices could rise as much as 40 percent. Does that mean President Obama will endorse fracking? Will New York Governor Andrew Cuomo finally make up his mind about it? (He’s promised a decision before his re-election in 2014.)

So what is going on here? Why is President Obama so utterly unconcerned about economics, so blasé about unemployment, so absorbed with tales about the coming environment apocalypse? Well, here’s my analysis.

President Obama has managed to win election by assembling two major constituencies: 1) a lumpen proletariat that has no idea how the economy works, is dependent on the government, and votes for him because he promises more handouts; and 2) an upper-crust constituency that thinks “we already have enough,” isn’t interested in any further economic development, and believes, if anything, that we already have too much of material possessions and it’s time to start cutting back on things. This has been the theme of environmentalism for 40 years. The rationale changes — we’re undergoing a “population bomb,” we’re drowning in pollution, we’re running out of oil and other resources — but the message is always the same. We’ve got enough. Time to call off all this progress. Let’s go back to spinning our own yarn, growing our own vegetables, and putting up windmills.

Together these two groups form a perfect vice to smother the ambitions of people who are interested in furthering the advance of progress and technology — the ones you might call “average Americans.”

All this was perfectly illustrated two weeks ago when filmmaker Robert Stone, who has just released the pro-nuclear documentary Pandora’s Promise, took on Robert F. Kennedy, Jr., that perfect embodiment of the environmental ethos. (Nuclear energy, by the way, the only technology that could possibly forestall global warming, received barely a passing mention in Obama’s speech. His main contributions have been to appoint a chairman of the Nuclear Regulatory Commission who is opposed to nuclear power and try to shut down the fuel reprocessing plant in South Carolina.)

A scion of wealth who lives in a retreat in the Hudson River Highlands, Robert Kennedy plays the upper-crust aristocrat who has turned against technology, just as Veblen outlined in The Theory of the Leisure Class. He wants to close Indian Point, he’s against fracking, he objects to natural gas pipelines, he opposed offshore windmills both off Cape Cod and in Long Island Sound, he’s opposed to genetically modified food, he’s even crusading against vaccines these days. But he has invested his money in a couple of huge, useless solar plants in the California desert.

So when Kennedy kicked off the Pandora debate by calling the film “an elaborate hoax” and accusing Stone of being on the payroll of the nuclear industry, Andrew Revkin, the New York Times environmental blogger who moderated the debate, threw him a challenge. “You’re invested in solar energy,” he said. “Doesn’t that mean you have your own interests? Why should we believe you?”

Kennedy pulled up short. You could almost see the wheels turning in his head. “Don’t you know who I am?” he seemed to exude. “I’m a Kennedy! We Kennedys don’t invest to make money. We already have money.” His investment, he finally explained, was for the good of mankind.

Environmentalism is the philosophy of an aristocracy. It works perfectly for people who already have what they want and aren’t terribly concerned with getting more. Much more important is that lots of other people don’t get what they already have. That would mean crowding into their restrictively zoned neighborhoods, discovering their vacation hideaways, and generally engulfing them in the common herd.

And of course all this plays extremely well in the faculty lounges across America, where tenure keeps things comfortable, where aristocratic mannerisms are forever in fashion, and where Obama imbibed most of his knowledge of the world before becoming President.

To me it has always been a great mystery why Obama is said to come to office representing the views of African Americans. He is, above all, a pure product of academia. Everything he says could be heard every day at faculty gatherings across the nation. “Folks out in the hinterland express their frustrations by clinging to guns and religion,” “You didn’t build that. The government built it for you.” “We face the greatest apocalypse in the history of mankind in the unregulated consumption of fossil fuels.” It’s posted on every faculty bulletin board.

On the other hand, does anyone think that a primary concern among African Americans in these depressed days is that sea levels may rise eight inches by the end of the century? Go ask.