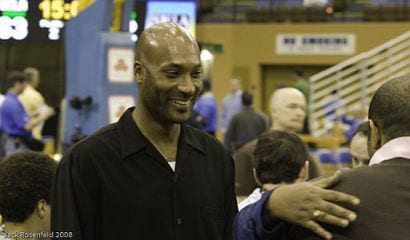 Former UCLA basketball player Ed O’Bannon wants to make sure college athletes get big cut of the revenues they generate for their colleges. He is the plaintiff in a class action antitrust lawsuit pending in federal court in Northern California in which he argues that college athletes should receive more than just full-ride scholarships for their role in what has become the multi-billion dollar enterprise known as NCAA sports.

The judge in that case, Claudia Wilken, is currently considering whether it should go forward. If the case continues, it could result in sweeping changes in college athletics as we have known them, particularly in the Division I revenue-generating sports of football and basketball. Depending on your perspective of NCAA’s Division I sports empire, O’Bannon could become the celebrated hero or despised goat of college athletics.

The defendants in the case and proponents of the status quo argue that student-athletes already are richly compensated. When athletes accept scholarships, they are provided tuition, books, meals, housing, and sometimes graduate assistantships. At some colleges and universities, such support may reach a value of $200,000 or more over a four-year period. Student-athletes may also receive special treatment when it comes to academic issues, for example priority scheduling, tutoring assistance, and excused absences.

I have a very personal perspective of the issue. Without a football scholarship, my father wouldn’t have been able to attend the University of Chicago, where he played football in the backfield with the first Heisman Trophy winner, Jay Berwanger. My dad went on to graduate from the U of C, served as a Navy officer in World War II like most of his classmates, and culminated a successful career as vice president of real estate and construction for Sears Roebuck with construction of the Sears Tower.

My father knew that, like so many others generations of scholarship athletes, without the boost from competing on the gridiron, none of that would have been possible. Just like back in the 1930s when my father played football, intercollegiate sports today provide golden opportunities to tens of thousands of student-athletes every year.

Of course, college football in my dad’s era wasn’t the revenue generating engine that it is today. To be sure, he played before sellout crowds of up to 50,000 fans in legendary Stagg Field (better known as the birthplace of the first sustained nuclear chain reaction), but there were no lucrative network and cable TV contracts and revenues from sports apparel and merchandise were a mere fraction of what they are today.

Back then college coaches weren’t awarded multi-million dollar contracts and never, never were paid salaries anywhere near those of the university presidents. Colleges and universities back then had their priorities straight in the balancing of academics versus athletics.

Student-athletes took their scholarship opportunities seriously and very few set their sights on careers in professional football or basketball. (Heisman star Jay Berwanger turned down an unusually generous offer from Chicago Bears’ legend George Halas to start a very successful career in private industry.) College was viewed as a golden opportunity for a good education and a quality foundation for a successful career, not a way station to professional sports. (Outraging students and alumni, University of Chicago president Maynard Hutchins abolished intercollegiate football at the U of C in 1939, famously proclaiming, “Football has the same relation to education as bullfighting has to agriculture.”)

By contrast, college football today is a huge business that generates billions in revenue annually (the net revenue from basketball is even more dramatic due to minimal expenses and smaller rosters). Universities rake in multiple millions from TV revenues, merchandise sales, and bowl game cash. Successful coaches leverage their success on the gridiron or hardwood to negotiate lucrative multi-year contracts worth as much as University of Texas football coach Mack Brown’s $5 million per year (the University President’s salary is $750,000). Is Longhorn football really five times more important than academics? Do the math… I guess so, in their minds.

With all that money in the system, some argue strenuously that student-athletes should get a piece of the pie much bigger than a full-ride scholarship. In fact, some legal scholars have even argued persuasively that “student-athletes” are really university employees who could be unionized under federal labor laws and bargain collectively for better wages and benefits. Just imagine a Teamsters Local 99 of Ohio State football players taking a strike vote right before the traditional rivalry game against the Michigan Wolverines. Not a pretty picture, particularly for ABC.

The lure of money continues to be the Achilles’ heel of amateur sports. The simple fact is that money corrupts… and huge money corrupts absolutely (witness the disgraceful scandals in the beleaguered Ohio State and Miami football programs).

But, there may be room for compromise. Perhaps those athletic scholarships could be expanded to include living costs and a modest stipend. This sort of deal would allow the universities sufficient dollars to continue to fund non-revenue sports and support the women’s sports necessary to satisfy their Title IX equality obligations, while at the same time protecting the time-honored sanctity of the student-athlete model. This would be a significant challenge for many large Division I programs, but the challenges certainly should be manageable.

To be sure, there is no way to turn back the clock, or un-ring the revenue bell in college athletics, but the current sullied culture of collegiate sports seriously depreciates the value of a good education and in the process makes some wonder whether University of Chicago President Hutchins may have been right after all.