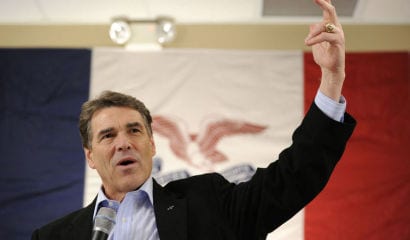 Wendy Davis as governor of Texas?

Wait; just a bit out of breath here; ribcage aches from too much, unduly prolonged, laughter.

There I go again. I will attempt some solemnity concerning my present governor’s passage, year after next, from leadership of the state he calls “the envy of the nation” to… well, whatever. A second race for the presidency, in the year (2016) Perry could have but says he won’t run for reelection as governor, can’t be ruled out entirely, given what observant Texans have learned to identify as their governor’s thirst for office. He noted this week, in bowing out of the governor’s race, that he will “pray and reflect and work to determine my own future part.” What else could he have in mind but another crack at the presidency in, likely, a red year for America?

As it happens, Perry’s presidential possibilities are less arresting than his legacy in Texas. Did long-winded Wendy Davis achieve sufficient traction from her 11-hour filibuster against a pro-life bill? ion ? That would be the initial question: to which the answer is certainly no. Though you might not guess it from the media’s tight embrace of State Sen. Davis, a Fort Worth Democrat, who talked to death a House-passed bill that would have tightened the state’s already tight abortion restrictions. It sounded for a time like the Second Coming of Ann Richards.

“A brave state legislator and an army of feminist supporters,” chortled the sub-head on a Rolling Stone story, “have stopped Texas’ extreme anti-choice law for now, but the fight is just beginning.” The filibuster — bolstered by chanting from spectators in the Senate balcony — vaulted Sen. Davis to a prominence she had not previously enjoyed, despite accolades won during a filibuster two years earlier on a school finance bill. Hardly had she sat down, this second time, before she was queen of Democratic, and liberal, hearts: a budding governor, a prospective president.

People do talk like that in today’s media-political circles. Nothing anymore remains to be proved. Prospects open up because, by gosh, the media say they should open up. Anthony Weiner seeks redemption and a second chance because he thinks himself entitled to it. Oh, well.

To put matters in another perspective:

Sen. Davis may run for governor in 2016, but not even the retirement of our longest-serving (13 years and counting) governor affords her much hope of success. Perry, in his stepping-down speech, pretty much told it as it is about Texas: “the new frontier,” he called it, “for opportunity and innovation.” The state’s reputation for rugged independence tends to attract migrants similarly disposed; the business climate flourishes, despite several problems in need of serious attention, including transportation funding and a public education system only half as good, probably, as it was two generations ago. The Republican hold on Texas — no Democrat has won statewide office here since 1994 — may weaken in coming years as whites, especially conservative ones, achieve minority status. Nonetheless, what the Democrats’ offsetting Good Ideas would be is hard to predict. A state income tax? Tell me another one. Wendy Davis’s cheerleaders in the media are extrapolating from evidence picked up mainly on the West Coast and in the northeast. A safe bet (it seems to me) for the governorship in 2016 is Republican Attorney General Greg Abbott, an attractive conservative who is — don’t you love it, Ms. Davis? — strongly pro-life.

“Reproductive freedom” excites the kind of people who turn out to sit in the balcony of the Texas Senate and sing hosanna to Wendy Davis, but on the evidence — the Texas Legislature’s record, under Perry, for tightening the screws on abortion availability — the state is far from ready for leadership by inexhaustible middle-aged state senators in pink tennis shoes, even those of the female disposition. I don’t see Sen. Davis as pulling more than two of every five votes against a likeable and reliable Republican such as Abbott.

A word about Perry. It’s time he stepped down. Political figures grow stout and stale from too much electoral admiration. He’s a good conservative; I especially admire him for writing a refreshing book in praise of Boy Scout ideals. How many other public men and women have stuck their necks out so far in behalf of an institution as old-fangled as the Scouts? None come to mind.

Perry’s pro-business policies — increasingly castigated around here as insider-oriented — have created a lot of jobs, and that’s good. But enough’s enough. The jar needs shaking up; the omelet requires flipping. Someone else deserves a crack at leading Texas.

So then: President Rick Perry? Maybe and maybe not. Perry right now contemplates a wide-open Republican race, devoid of past losers, but memories of his last race linger still — mostly, the government department, a prospect for abolition, whose name he couldn’t remember in debate. His manner, moreover, is likely too indelicate for a lot of “centrists,” including the avowed Republicans now castigating him for involving the government in private people’s private business (including, presumably, the private business of trying to get born alive).

I doubt Perry will play terribly well on the national scene, never mind what he has to say. But I could be wrong.