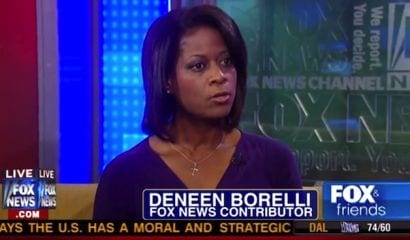 The NAACP is blackballing black conservatives.

You missed this? Considering the state of the liberal media these days, one shouldn’t be surprised.

But there’s infinitely more to this story than this, although the rejection of Borelli and Bryant personifies the reason the NAACP has long since lost its hard-won credibility. Credibility that came from a long, distinctly honorable record of standing against the most vicious racism the American Left — yes the American Left — could dish out.

Now? Now the NAACP has basically decided: why beat them when you can join them?

In a few days, July 13-17 specifically, the National Association for the Advancement of Colored People — the NAACP — will be gathering in Orlando, Florida, for its annual convention.

The welcome mat is not out for Ms. Borelli or Reverend Bryant.

Ads have been run on the Rush Limbaugh show featuring the Reverend Bryant, a distinguished civil rights leader who is a former president of the NAACP’s Garland, Texas chapter. (Here is Rev. Bryant’s website.) Bryant is urging his fellow Americans to contact the NAACP and ask them to let both Borelli and Bryant speak at the convention.

There is a petition, found here. Sponsored by the aptly named Freedom Works. Since the liberal media delights in ignoring black conservatives, we are pleased to reprint the petition in its brief entirety right here. The bold print is as supplied in the original:

The NAACP wants to silence conservatives who believe the government should be limited to defending your liberty.

This is an outrage. Americans of all color should strive to achieve success without dependency on Big Government. The message of opportunity, hard work, and economic freedom should be a part of the NAACP. Prohibiting conservative speakers like Deneen Borelli and Reverend C.L. Bryant sends the wrong message.

WE NEED TO STAND WITH BLACK CONSERVATIVES.

Follow the link above and you can sign the actual petition and e-mail it to the NAACP.

The other week, Sean Hannity spent an entire show discussing the vilification faced by African-American conservatives. Here’s a link to the show, which featured almost two-dozen prominent black conservatives, Deneen Borelli included. In fact, the show was an outgrowth of an earlier Hannity show discussing some of the same subjects. The first show, which included Rev. Bryant, received such tremendous response Hannity did the second show.

To listen to both of these townhall-style Hannity shows, to listen to Borelli and Bryant and their colleagues, is to understand exactly why the NAACP is so adamant in their desperate effort to silence black conservatives.

In the words of Star Parker, the columnist and black conservative leader who has spent her own life deeply involved in racial issues:

When we look at who’s behind this strategy, the Liberal democrats have not changed their M.O. This is not a new strategy. They used it during slavery. Remember, every time the word freedom was mentioned, and African-Americans at that time heard about freedom , if you ran away they would bring you back to that plantation — the Overseer. The Overseer today is the Congressional Black Caucus . Their exclusive job is to keep them on the plantation, keep them uneducated and keep them unarmed. And this was the same job of the Overseer of the slave plantation which was liberal Democrats…they would take that slave… they would strip the skin off of him and make everybody watch…. And that’s what they do to us.

When an astonished Hannity interrupted in here to ask if Parker really was comparing the Congressional Black Caucus to slave owners, Parker answers emphatically: “It’s the same exact strategy.” As she does so Hannity looks over the audience and says: “You all agree with that?” A chorus of yeses from nodding heads comes back at him.

Which illustrated vividly exactly why the NAACP has gone to such great lengths to keep Borelli and Bryant from their convention podium.

Take a look at this video of Deneen Borelli in action last week at a FreedomWorks event.

Is there any wonder why the NAACP doesn’t want Borelli talking about black conservatism at their convention?

Here’s Borelli directly taking on NAACP spokesman Hilary Shelton over the charge of racism in the Tea Party.

Borelli is herself a Tea Party member.

Here’s Borelli challenging Shelton in another Fox appearance, the subject, notably, of whether the NAACP will defend black conservatives.

Shelton seemed to say yes — but as Borelli documented in her book, the NAACP did nothing in defending Borelli herself.

Here is Bryant, on CNN (as reported by the Daily Caller and Fox Nation) challenging the network’s Roland Martin about the way the black establishment responded to the killing of Trayvon Martin.

In an interview with The Daily Caller Monday, Bryant, once the chapter president of the Garland, Texas NAACP, criticized Revs. Jesse Jackson and Al Sharpton of “exploiting” the Martin tragedy in order to “racially divide this country.”

The story goes on to quote Bryant’s direct challenge to what many black conservatives consider to be a sell-out of civil rights groups to the liberal Establishment. In the case at hand for the discussion of the Zimmerman case it was the role of Jesse Jackson and Al Sharpton. Bryant was direct in his CNN appearance, saying:

“Whenever there is something like this that occurs like Tawana Brawley, or the Duke Lacrossee team, you can guarantee you that two faces will show up in order to heighten the tension in this type of situation and they’re usually Rev. Sharpton and Rev. Jackson.”

“Let’s have the same type of energy towards the young lady, the little girl who was killed on her door steps in Chicago who was six-years old. Let’s gather 2 million people and talk about the black-on-black crime that is going on. The most dangerous person in the life of a young black man is another young black man. And the type of ideas that are spawned when we gather together over a white-on-black murder — and in fact, there is not an epidemic of white men killing black boys.”

Bryant was undeterred. The former NAACP leader has put together a documentary called Runaway Slave featuring Borelli, Thomas Sowell, former Congressman Allen West, Herman Cain, Alveda King — the niece of Dr. Martin Luther King — and others to discuss the rebellion in the ranks of the civil rights Establishment.

When one listens to the passion of Borelli and Bryant and their colleagues there is no doubt as to why the NAACP doesn’t want to give either a platform at their national convention this weekend.

The NAACP is afraid. It has long ago abandoned the original vision of its founders.

That vision? Here is the NAACP itself on its mission — when it was established in 1911:

To promote equality of rights and to eradicate caste or race prejudice among the citizens of the United States; to advance the interest of colored citizens; to secure for them impartial suffrage; and to increase their opportunities for securing justice in the courts, education for the children, employment according to their ability and complete equality before law.

Yet somehow, today’s NAACP says its objective is something else:

To ensure the political, educational, social, and economic equality of all citizens.

Which is to say, something happened to the NAACP between its founding in 1911 and the NAACP of today that refuses to let Borelli and Bryant speak.

That something is very simple to see.

And right there, black conservatives, having no desire to be slaves on the liberal plantation, became what Bryant calls “runaway slaves” — men and women who valued their freedom and have no intention of participating in a philosophy that has repeatedly failed people of all races throughout history.

There is a huge difference between working for equal rights — and using the government to force equal results.

Borelli succinctly describes this change in the objective of the NAACP this way:

The NAACP has put aside the pretense that it is a civil rights organization and has exposed its real agenda as a left-wing promoter of all things progressive. The group isn’t concerned about President Obama’s race, it’s concerned about his big-government policies and furthering them.

Thomas Sowell, writing here in The American Spectator in a colum titled “Who Is Racist?” poses the same point as Borelli and Bryant:

The civil rights movement in 20th century America attracted many people who put everything on the line for the sake of fighting against racial oppression. But the eventual success of that movement attracted opportunists, and even turned some idealists into opportunists.
Over the generations, black leaders have ranged from noble souls to shameless charlatans. After the success of the civil rights insurgency, the latter have come into their own, gaining money, power and fame by promoting racial attitudes and actions that are counterproductive to the interests of those they lead.

Counterproductive to the interests of those they lead.

The irony, of course, is that the NAACP has now become what it was once formed to fight.

All those white supremacists and Klan members back there in 1911– were left-wing progressives. Klan members regularly won elections at the local, state, and federal levels as Democrats and progressives. As Borelli accurately notes:

It is a widely held view that the right was pro-slavery and opposed to the civil rights movement. That’s simply not true.

The real reason Borelli and Bryant are not going to be allowed to speak at the NAACP Convention is because they refuse to support the leftist agenda that, tragically to this very day, is all about making slaves out of black America.

This time with the complicity of the NAACP.

Deneen Borelli and the Reverend Bryant and their colleagues in the growing black conservative movement have no intention of being silenced.

Will the NAACP change its mind?

Or, in fact, is this the reality of how a once proud organization with a historic past looks and acts as it slowly loses its relevance.

By becoming at the end what it fought in the beginning: