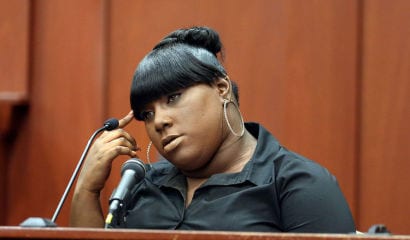 Becoming a teenage television star turns out to be surprisingly easy: Testify for the prosecution in the murder trial of an innocent man in a case that liberals want to turn into a carnival of racial hatred.

Rachel Jeantel’s appearance on Monday night’s Piers Morgan Live was a new low in the relentless dumbing down of American culture. Her claim to fame is that she was having a cell-phone conversation with Trayvon Martin shortly before the 17-year-old was shot to death by George Zimmerman. Having been discovered by Florida civil rights attorney Benjamin Crump and offered as “Witness 8” for the prosecution, Jeantel was undeniably the star of the Zimmerman trial — not in a good way. During the course of her testimony, she introduced the phrase “creepy-ass cracker” to the national vocabulary and embarrassed herself when she was forced to admit that she could not read a letter she allegedly wrote to Trayvon’s parents. Asked to read the letter aloud in court two weeks ago, the Miami teen confessed: “I don’t read cursive.”

Exactly what Rachel Jeantel does read is a mystery. She appears to be a typical specimen of the sub-literate youth warehoused within the Miami-Dade County school system. Anyone who has read the text-messages Trayvon exchanged with Jeantel and his other friends must despair for the future of the country. After watching Jeantel on CNN Monday, it’s even harder to be hopeful. The 19-year-old was asked by Morgan to react to a juror’s comments about the incoherence of her testimony.

God help us, she’s probably right: Rachel Jeantel is “the new school” — the emblematic star of an ill-educated generation raised on TV and pop culture, disrespectful of their elders, marginally literate and incapable of exercising the duties of responsible citizenship. This is the person whom CNN featured on its highest-rated prime-time broadcast where she was treated with complete deference by the British-born host as she lectured, among other things, about how a deplorable racial slur should be considered a term of affection. “The whole world say it’s a racist word,” she said, explaining that merely spelling the word differently changed its meaning.

“What does that word mean to you?” Morgan earnestly asked.

“That mean a male,” Jeantel answered, perhaps indicating that grammar has been discarded by Miami-Dade schools along with cursive handwriting.

Rush Limbaugh proclaimed Jeantel’s appearance “the embodiment of low-information,” a term applied to the type of voters President Obama’s campaign sought out to make the difference in last year’s election. When Rush repeated the racial word that Jeantel had explained, the radio host apparently got some blowback from his show’s producer, who is black. “Hey, new school! New school!” Limbaugh jokingly protested. “This is the point, Snerdley: She is the authority. She was on CNN last night. She was presented as the authority, and the CNN commentators all day today have been wondering why this brilliant woman didn’t show up and say these things on the stand.”

Cable TV news is arguably the only reason that anyone cares about the death of Trayvon Martin and the trial of George Zimmerman. More than 10 million Americans tuned in to cable TV to watch the verdict Saturday night. These numbers aren’t really impressive in a nation of more than 300 million people, but they were pretty good for cable TV news on a Saturday night, and producers apparently decided that the conclusion of the trial was no reason to abandon the story. This case — which was only a local crime story until national TV networks jumped into it — has become the occasion for an endless telethon of lectures about the evils of racism and gun ownership. Three days after a jury declared Zimmerman not guilty of murder, CNN continued its wall-to-wall coverage of the case Tuesday, misinforming its audience about basic facts. Over and over, CNN’s hosts and commentators brought up Florida’s “Stand Your Ground” law, despite the fact that this law enacted in 2005 had nothing to do with the Zimmerman trial. But issues that may have a lot to do with the trial, the networks are willing to ignore. The one thing that CNN and the rest of the media establishment have refused to discuss is the path that brought a teenager to his fatal encounter with the neighborhood watch captain of that townhouse community in Sanford, Florida.

Trayvon Martin was not from Sanford, Florida. This is perhaps the most important fact of the entire story, in part because it may explain why the teenager was so disturbed at being followed by George Zimmerman. Trayvon was from Miami Gardens, the largest majority-black city in Florida, where the population is 76 percent black and 22 percent Hispanic and “creepy-ass crackers” are quite rare. Crime is commonplace in Miami Gardens — the crime rate is about 70 percent higher than the national average — and Trayvon Martin was one of the criminals.

Twice during his junior year at Krop High School, Trayvon was caught by school police with evidence of crime. The first time, in October 2011, an officer with the Miami-Dade School Police Department (MDSPD) caught Trayvon engaged in writing graffiti on a door and, searching the teen’s backpack to find the marker he had used, found 12 pieces of women’s jewelry and a man’s watch. Trayvon claimed he had gotten this from a friend he refused to name. The jewelry matched the description of items stolen in the burglary of a nearby home — but this evidence was never reported to the Miami-Dade police who were investigating that burglary, because the MDSPD did not charge Trayvon with a crime. Instead, the stolen jewelry was listed as “found items” in the MDSPD officer’s report, and Trayvon’s punishment was merely a suspension from school for the graffiti incident.

It turned out that MDSPD Chief Charles Hurley had instituted a policy of not reporting most crimes committed by students in Miami-Dade schools. This statistical manipulation was so successful that, less than two weeks before Trayvon Martin was killed, Hurley was commended for “decreasing school-related juvenile delinquency by an impressive 60 percent for the last six months of 2011.” So Trayvon was not arrested for possessing stolen jewelry, nor was he arrested in mid-February 2012 when he was caught with a plastic bag containing marijuana residue. Trayvon’s habitual use of marijuana was hardly a secret. Evidence obtained from his cell-phone included photos of Trayvon exhaling smoke, as well as photos of marijuana plants and a semi-automatic pistol, his purchase of which was apparently negotiated through text-messages on the same phone.

None of this evidence of Trayvon’s juvenile criminality was discussed in the interminable cable-news talkfests in the aftermath of Zimmerman’s acquittal by a Seminole County jury. Trayvon’s school disciplinary record was first reported by the Miami Herald in March 2012, before Zimmerman was indicted for murder, but interest in the teenager’s background seems to have waned after Al Sharpton (who has his own show on the third-place cable news channel, MSNBC) declared that everything about Trayvon was irrelevant, except his death. Zimmerman “didn’t interview him before he shot him,” Sharpton said at a press conference at the time. “The only thing that’s relevant is what Zimmerman knew.” Crump, the civil-rights lawyer, was similarly dismissive of Trayvon’s criminal past: “It’s completely irrelevant to what happened Feb. 26…. If it were true, why wouldn’t they call the parents? Why wasn’t he arrested?”

He wasn’t arrested, of course, because of Chief Hurley’s “impressive” feat of pretending that crimes were not crimes. Instead he was suspended in mid-February, which helps explain why Trayvon was in Sanford — 240 miles north of Miami Gardens — on Feb. 26. Trayvon Martin’s parents have repeatedly appeared together at press conferences and rallies, but in fact they divorced when their son was 4 years old. For most of his childhood, Trayvon lived with his father and his stepmother, Alicia Stanley. But Trayvon’s father divorced Stanley recently, and began what a reporter for the Reuters news agency called “a long-distance relationship” with Brandy Green, spending weekends at her townhouse in Sanford. After Trayvon’s father’s divorce from Stanley, his son had stayed for a while with his mother, Sybrina Fulton, but she reportedly couldn’t deal with his unruly behavior and kicked him out. This explains why, after his mid-February suspension from school, Trayvon went to Sanford to stay with his father at Green’s townhouse. On the Sunday night Trayvon was shot to death, his father had gone out to dinner with Green.

None of this background — the explanation for why Trayvon was in Sanford that night in February 2012 — was mentioned by CNN’s hosts and commentators as they went over and over the same tired arguments about racism, gun ownership, and whatever else they blamed for Trayvon’s death and Zimmerman’s acquittal. Much of the reporting about Trayvon’s background was done by bloggers at a site called TheConservativeTreehouse.com, and CNN viewers likely have no idea why a kid from Miami Gardens was walking on Retreat View Circle in Sanford that drizzly February night when Zimmerman told the 911 dispatcher: “We’ve had some break-ins in my neighborhood, and there’s a real suspicious guy…. This guy looks like he’s up to no good or he’s on drugs or something.”

The facts about Trayvon Martin are apparently as irrelevant as grammar and cursive handwriting in America today. We’ve outsourced everything to cable TV news, where Piers Morgan defers to the authority of Rachel Jeantel, who may have exacerbated Trayvon’s fear of Zimmerman by warning him that the “creepy-ass cracker” might be a gay sexual predator. “For every boy or every man … see a grown man following them, would they be creep out?” Jeantel told Morgan in her inimitable grammar-deficient syntax. “So you gotta take — as a parent, you tell a child, ‘You see a grown person followin’ you, run away,’ and all that…. You tell your child to stand there, we gonna see your child on the news as a missing person.” Unless, of course, you see your child on the news as dead, which is what happened to Trayvon Martin. Testimony at Zimmerman’s trial indicated that Trayvon didn’t run to his father’s girlfriend’s townhouse, although he had ample time to do so, according to the timeline of events. Instead, the 6-foot-tall teenager confronted the 5-foot-8 neighborhood watch captain, beating his head against a concrete sidewalk until Zimmerman pulled his pistol and shot his attacker.

Tuesday morning on CNN, defense attorney Mark NeJame praised Rachel Jeantel as a “sweet, funny, engaging person,” and never mind if her warning to Trayvon may have led to a mistaken homophobic attack on Zimmerman. America’s newest teenage TV star can’t read cursive, but that’s old school. Like she said, we’re in the new school now. God help us all.