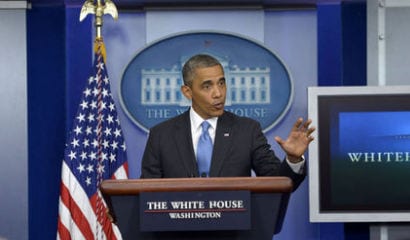 Should it come as a surprise to anyone that President Obama would pontificate at length about the verdict in the trial of George Zimmerman? Is anyone shocked that Obama would once again make a point of identifying himself with Trayvon Martin?

First and foremost, nothing pleases Obama more than the sound of his own voice. Obama is most pleased with his voice’s sound when it is lecturing the nation while talking about the virtues of his favorite subject — himself. But these days President Obama is hardly in a position to be lecturing anyone and there are certain subjects he would just as soon avoid talking about at any length (i.e. the imminent bankruptcy of Detroit, the IRS scandal and infeasibility of Obamacare to name but several).

To be precise, Obama is disinclined to discuss subjects which involve:

a) Matters for which he is actually responsible;
b) The nuts and bolts of governing and the style in which he governs;
c) The consequences of his policies.

As such President Obama’s preferred topics of discussion concern matters which:

a) Rally his base;
b) Provides him with an opportunity to speak in a condescending manner to those who do not share his values and thus deems to be inferior;
c) Does not put him in a position where he is obligated to implement, much less propose a solution or viable alternative (although it doesn’t preclude him from supplying some window dressing).

One cannot underestimate the importance of Obama rallying his base. A recent Zogby poll indicates that African-American support has fallen 9% since his re-election. Granted, 84% of African-Americans still support Obama and is a far from a full scale abandonment. But a loss of faith can feed on itself if not properly re-nourished. From where Obama sits, what better way to win back African-Americans who feel taken for granted and have been wavering in their support than by wrapping himself in Trayvon Martin’s hoodie? It worked for him before. Why not stir the pot again?

Obama paid lip service to the judicial process and the professionalism of those involved in the Zimmerman trial including the judge, the prosecuting and defense attorneys and the jury. But what Obama really wanted to talk about was “how people are feeling.” Or perhaps about how he was feeling. How else does one explain Obama’s claim that “Trayvon Martin could have been me 35 years ago”? Obama expands on his feelings:

And I don’t want to exaggerate this, but those sets of experiences inform how the African American community interprets what happened one night in Florida. And it’s inescapable for people to bring those experiences to bear. The African American community is also knowledgeable that there is a history of racial disparities in the application of our criminal laws — everything from the death penalty to enforcement of our drug laws. And that ends up having an impact in terms of how people interpret the case.

A critical mass of African-Americans may very well believe that racial hatred motivated George Zimmerman to kill Trayvon Martin and believe this based on their experiences. This critical mass is entitled to its opinions, but it is not entitled to its facts. When one considers the amount of time and energy spent by Al Sharpton and others in insisting that Zimmerman racially profiled Martin; it is nothing more the 21st century edition of the Big Lie. Repeat a falsehood loud enough and often enough and people will accept it to be true. Obama’s statement does nothing to dispel this Big Lie.

If Zimmerman is the personification of racism, then why did he defend a homeless black man named Sherman Ware who was beaten by the son of a white police lieutenant with the Sanford Police Department at a public meeting a year before shooting Trayvon Martin? Had Martin been beaten by the son of a Sanford Police lieutenant, it is quite reasonable to say that George Zimmerman would have been the first to come to Martin’s defense.

If Obama were truly concerned with “how people are feeling” then perhaps he ought to give more due consideration to the feelings of the families of those who died at Fort Hood. As Nidal Malik Hasan is currently facing trial for murdering for his military colleagues, it would behoove Obama to re-consider his characterization of this act of evil as “workplace violence” instead of terrorism despite the fact Hasan shouted “Allahu Akbar!!!” while carrying business cards declaring he was a “Soldier of Allah.” It would also behoove Obama to explain why his Administration sees fit to deny these soldiers Purple Hearts and deny their families military benefits.

President Obama could rectify this matter by addressing the nation after Hasan’s verdict is announced as he has done following the Zimmerman trial. But don’t count on it. Unlike Trayvon Martin, no one who died at Fort Hood reminds Obama of himself.