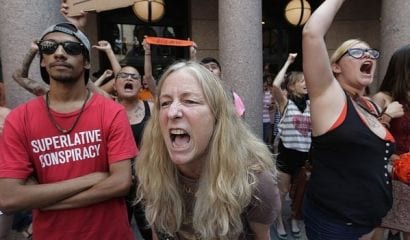 “Amazing Grace, how sweet the sound—”

“I once was lost but now am found; was blind but now I see.”

Such was the surreal scene at the Texas state capitol, where hymn-singing pro-lifers encountered satanic (literally) abortion activists, hell-bent in opposing a bill that bans abortions over 20 weeks and takes the common-sense step of increasing “safety” and “health” standards at abortion facilities. The battle raged for weeks in the summer heat. Its nadir occurred one Tuesday about three weeks ago, as inspired pro-lifers broke into a spontaneous rendition of “Amazing Grace,” only to be shouted down by the disciples of Planned Parenthood chanting “Hail Satan! Hail Satan!”

It was an auspicious and revealing beginning, one that set the tone for the behavior of the pro-choice side. Margaret Sanger’s apostles steadily descended downhill from there; their rhetoric plummeting deeper into the dark side. A few days later the abortion faithful conjured up additional hellacious language, this time yelling in unison: “F—k the church! F—k the church!”

Well, of course. What else would they say? That is, after all, precisely what these folks really think. Regrettably, they weren’t quite sophisticated or calm enough to let us know if the “c” in “church” should be lower case or upper case. Even if you’re not a copy editor, the distinction isn’t irrelevant. A lower case “church” might implicate Christendom generally, or organized Christianity. An upper case “Church” might signal special contempt for the Roman Catholic Church (more likely than, say, the United Methodist Church). Alas, no one paused to provide clarification. All we know is that these people were damned angry, and they damned religion in particular. And no doubt, they were fulminating in the right direction; the church/Church is indeed the ultimate enemy for these folks—who emerged in force and fury even in a state as religious and conservative as Texas.

Speaking of which, if a misbegotten display like this can occur in Texas of all places, imagine what unholy hell might be unleashed by “women’s health” brigades in states like California or Massachusetts. If the forces of “choice” could be so militant, so vile, so aggressive, so crude in the Lone Star state, then this country and culture truly has gone to hell in a hand-basket. One is tempted to dismiss the crew in Texas as an isolated gathering of run-of-the-mill pagans, but that would be unfair to pagans, who are more restrained and certainly better mannered, and it would also ignore the ferocity of the abortion movement nationwide.

Frankly, I’m grateful for the entire exhibition in Texas, if the poor pro-lifers who suffered the spectacle will forgive me for saying so. I’m grateful for what the Satan-hailers and church-f—kers told us and taught us. They offered a rare moment of transparent honesty from the abortion movement, which normally obfuscates its intentions with benign slogans like “safe, legal, and rare,” “reproductive freedom,” “women’s health,” and, worst of all, “choice.” The word “choice” is especially egregious, if not diabolical; it inverts the Scriptures, which exhort us to “choose life” over death. God has given us a choice in matters of life and death, and told us categorically to choose life. The abortion movement has not chosen life. Satan chooses death over life. And thus, the “Hail Satan” sentiment in Texas—summoned to drown out appeals to God’s grace—makes perfectly clear the source from which this movement stems and gets its inspiration and power.

Such sentiments were on parade throughout the period of protests at the state house. A teenage girl destined to become another Democratic Party prop in the “war on women” charade hoisted a sign that declared: “Jesus isn’t a [penis]; so keep him out of my vagina.” The girl used a slang term for penis.

Ah, yes, another deserved lovely slap in the face of those dastardly pro-life Christians!

One is tempted to feel sorry for the young girl’s parents, but such sympathy would be misplaced. The girl’s father stoically stepped forward to say that he’s “proud” of his little girl. “My daughter made that sign,” he boasted. She’s “just standing up for … reproductive freedom.”

Yes, of course she is. Hey, you reap what you sow.

Feel sorry for the girl, in this case—not the parent.

If you think that one is bad, and if you’re a glutton for more of this perversity, click this link at LifeNews.com. Many of the placards carried by the Planned Parenthood believers are too obscene to repeat here.

Alas, speaking of signs, here’s how much the pro-“choice” side really cares about free speech in the abortion debate: As the Texas governor was readying to sign his state legislature’s bill restricting abortion, Rhode Island Governor Lincoln Chafee vetoed a bill by his state legislature allowing motorists to purchase “Choose Life” license plates for their vehicles. The governor deemed those signs too religious.

Speaks volumes, doesn’t it? Who says the Devil doesn’t have a sense of humor.

Which brings us back to the hell-raisers in Texas.

What really speaks volumes is what happened in Texas as Armageddon settled in. As Governor Rick Perry mercifully signed the bill, abortion activists let out a final infernal scream from the pit of the capitol. Yelling and screaming could be heard outside the governor’s door. No one could confirm if they emanated from the throat of Cecile Richards, Planned Parenthood executive director and a Texas native herself—in fact, daughter of former Texas Democrat Governor “Ma” Richards. Rather, Cecile quickly voiced her protest with the promise of a lawsuit against the ban.

Mere hours later, however, the feelings of Richards and her sisters became particularly palpable, as Planned Parenthood informed employees at three Texas locations (Bryan, Huntsville, and Lufkin, all run by the organization’s Houston affiliate) that they now would be closing. Imagine: A ban on late-term abortions is enough to put Planned Parenthood out of business. Gee, and I thought they were simply doing breast-cancer screenings?

Rick Perry’s pen had the magical effect—Providential effect?—of shutting down these bloody altars of the “Hail Satan” crowd. The sacrifices will hereby cease in these bastions of “reproductive freedom.”

No wonder they raised hell.