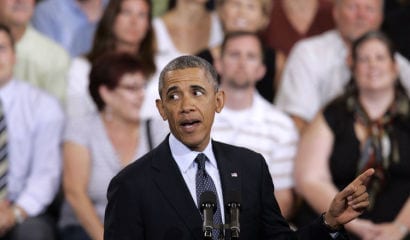 It’s difficult to listen to a Barack Obama speech when it would be easier, faster, and less painful to write one.

So it was with as much a sense of impending boredom and déjà pivot as concern about predictable content that I embarked on listening to President Obama’s speech on “the economy” delivered on Wednesday at Knox College in Galesburg, Illinois.

If you’ve heard any of the many other “pivots” to jobs and the economy, always when the stuff Obama actually cares about somehow fails to support his poll numbers, you won’t be surprised that I can (and therefore shall) summarize his economic points in brief…which is to say in 45 minutes less than he did:

Given the yawn-inducing leftist pabulum of the five-point economic plan (which I won’t offend your intellect by repeating) offered by our never-had-a-real-job president, the interesting part of Wednesday’s speech was political.

Obama characterized Republicans, especially in the House of Representatives, as harming the poor and “vulnerable” children. He blamed the GOP for the “meat cleaver” nature of the sequester despite the fact that he rejected being given the authority to turn it into a scalpel, that is the ability to allow federal departments to more carefully allocate spending cuts as long as the amount spent was not lessened. As always, he wanted the issue more than the solution.

The president said he will “work with Republicans…wherever I can” but that is a promise he has made and broken so many times in the past that it is unlikely anyone but John McCain believes him.

After a brief sop to moderates, suggesting that “Democrats need to question old assumptions…and embrace changes to cherished priorities so that they work better in this new age,” Obama went on to attack and insult Republicans…garnering the biggest cheers of the afternoon from his hand-picked audience.

He claimed that “there are Republicans in Congress right now who privately agree with me on many of the ideas I’ll be proposing, but worry they’ll face swift political retaliation for saying so.” Perhaps there are such Republicans, a small-and-shrinking number, but they are far too few to overcome the broader GOP opposition — opposition which is wise on both policy and political grounds.

In one of his most egregious combinations of slander and straw man, Obama continued on to say that other Republicans “will dismiss every idea I put forward either because they’re playing to their most strident supporters, or because they have a fundamentally different vision for America — one that says inequality is both inevitable and just; one that says an unfettered free market without any restraints inevitably produces the best outcomes, regardless of the pain and uncertainty imposed on ordinary families.”

This demands more than a sentence in response. There is not a single Republican in Congress who utters the words, or secretly believes, the selfish, cruel caricature painted in pale watercolors by the president.

It is true that inequality is inevitable in a free society but that doesn’t mean that conservatives think of it as “just.” Eliminating inequality is a fine goal to the extent that it can be done without what Frederic Bastiat called “legalized plunder,” which is to say to a limited but still real extent, such as through allowing school choice and competition, policies angrily opposed by Democrats who prefer union dollars to getting poor children out of poverty. (See, Barack, two can play at that game!)

No Republican I know argues for a completely “unfettered free market.” After all, capitalism is not a synonym for anarchy, but rather a system that has definite rules to prevent fraud and theft; there are legitimate restraints on a “free market,” though far fewer than we already have, and far far fewer than this president wants.

And no Republican says that capitalism must inevitably produce the best outcomes in every individual case. There are losers in a free market. With good policy, many can be retrained with new skills and re-enter the workforce. And of course it is offensive and outrageous to suggest that Republican legislators are numb to the “pain and uncertainty” of those who lose jobs due to the creative destruction that embodies economic liberty.

Obama went on to accuse Republicans of blindly opposing him while not offering ideas of their own: “You can’t just be against something; you gotta be for something.” This is a bald-faced lie, of course, with the Ryan budget as a well-known case in point of a detailed, serious plan to address some of the nation’s most pressing concerns. Of course, Obama’s reaction to that was to invite House Budget Committee Chairman Paul Ryan (aka Jack) to a speech and then insult him in front of the gathered crowd. A truly classless man, our president.

So, let’s get this straight: Obama first says he wants to work with Republicans. Within minutes, he lies about what Republicans believe and claim that they have not offered constructive, substantive policy ideas. He followed up that warm welcome to Republican cooperation by saying that he will “not accept deals that do not meet the test of strengthening the prospects of hard-working families,” which is Obama code for high-taxing, big-spending, union-boosting budget busting which no Republican should support.

Obama concluded his barrage with a frequent refrain, suggesting that if Congress will not bend to his will, then he will proceed (the rule of law be damned) to implement his vision (his word, not mine) of transforming the nation into a European-style social-welfare state: “Yes, Congress is tough right now but that’s not going to stop me. We’re going to do everything we can, wherever we can, with or without Congress, to make things happen.”

Interestingly, this particular threat was not in the pre-released speech transcript, showing that — as is typical of this president — his true nature comes out in his ad-libbed petty-tyrannical rhetoric.

And when he’s not side-stepping Congress, he’ll be continuing the transparent cronyism and arm-twisting which has been a defining trait of this administration: “Where I can’t act on my own and Congress isn’t cooperating, I’ll pick up the phone, I’ll call CEOs, I’ll call philanthropists, I’ll call college presidents, I’ll call labor leaders — I’ll call anybody who can help — and enlist them in our efforts.” Again, with ad-libbing being this president’s truth serum, the part about calling labor leaders was not in the pre-released transcript.

He went on to give an example, positively mentioning Costco and the Container Store (one wonders whether those companies smiled or cringed at the mention), but leaving the distinct impression that he would be more than willing to use his bully pulpit as a hammer rather than for gentle praise.

Also of note, and raising questions about the competency of his messaging team, the president referenced, as Press Secretary Jay Carney has repeatedly as well, “phony scandals” — having the primary effect of causing Americans to remember the very real scandals of the IRS targeting, Benghazi, and Fast and Furious, just to name the most famous few.

Just before closing his speech with a shout-out to Galesburg’s most famous son, author Carl Sandburg, himself, a century ago, a member of Wisconsin’s arm of the Socialist Party, President Obama offered the most frightening sentence I have heard in a long time: “I care about one thing and one thing only, and that’s how to use every minute of the 1,276 days remaining in my term to make this country work for working Americans again.”

Coming from a man who has not the first clue how to achieve such a goal, a man who engages in economic malpractice at every turn, a man who neither likes nor understands the nation he nominally leads, our best hope is that those intransigent House Republicans keep on doing exactly what they’re doing.