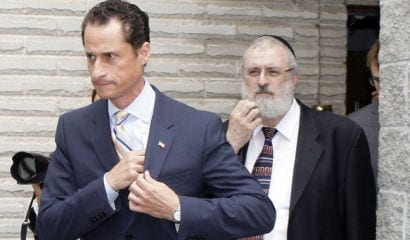 Perhaps now someone at the New York Times or the Washington Post will ask Patrick Frey what happens to bloggers who call attention to Anthony Weiner’s persistent fascination with young females. Or perhaps not. Either way, longtime readers of Frey’s Patterico blog know all about how, after he produced some of the most interesting research during the 2011 WeinerGate scandal, Frey was “SWATted” — the victim of a dangerous type of 911 hoax that dispatched armed police to Frey’s Los Angeles home, where the hoaxer had falsely reported a violent crime.

Whatever anyone might say about that incident, it certainly was not a coincidence, nor was it coincidental that liberal media organizations were perfectly willing to assist in Weiner’s political rehabilitation. There was a reason, after all, that Weiner’s young cybersex partner told her tale to a gossip blog, rather than to any major newspaper or TV network. If a conspicuously married Democrat politician is engaged in sleazy shenanigans with a 22-year-old, no respectable liberal journalist wants to break that story. In 2011, it was Andrew Breitbart who turned Anthony Weiner’s sordid secrets into a national drama that drove the New York congressmen to resign in disgrace. Breitbart died last year, and so the latest revelations came from Nik Richie at TheDirty.com, because none of the “mainstream” reporters at the New York Times, the Washington Post, NBC, ABC, CBS or CNN showed the least bit of curiosity about the other young girls who had been objects of Weiner’s perverse attentions. Exactly how many others there were we probably will never know, because there has been a rigorous journalistic commitment to knowing as little as possible about the online erotic adventures of “Carlos Danger,” as Weiner sometimes styled himself. If Watergate had been reported in the manner of WeinerGate, Ben Bradlee never would have let Woodward and Bernstein go so far as to mention the name of E. Howard Hunt in the pages of the Washington Post.

What we know of Weiner’s latest shame is that, in the wake of his 2011 scandal, the married Democrat began an online correspondence with an Indiana girl, identified by BuzzFeed as Sydney Leathers, who says she worked on President Obama’s re-election campaign. To give you an idea of Ms. Leather’s partisan and ideological commitments, after a maniac’s shooting rampage in Tucson, Arizona, she created an online petition that blamed this deadly crime on Sarah Palin, whom Ms. Leathers condemned for “inciting violence.” (In fact, the Tucson gunman was a schizophrenic inspired by a leftwing conspiracy “documentary.”) Only a liberal girl could admire a creep like Weiner. And in one of his creepy sex messages to Ms. Leathers, the 48-year-old Weiner employed a vulgar term for the female genitalia to ask whether she was “smooth” down there.

Let us digress to provide a historical perspective. Many years ago, Hugh Hefner’s Playboy magazine was able to avoid suppression as criminal pornography because the models were posed so as to hide the pubic region. This slight condescension toward wholesomeness (Hefner’s ideal of the “girl next door,” if your neighbor happened to be a buxom nudist) allowed Playboy an acceptance as marginally mainstream, but that stream eventually overflowed its banks. After the sexual revolution of the 1960s, a few key court rulings and an accompanying relaxation of standards, however, Bob Guccione’s Penthouse boldly showed what Hef had hidden, and a downhill race began that was eventually won by a shameless purveyor of obscenity, Larry Flynt. Rejecting Playboy’s Midwest middle-brow mentality, as well as Guccione’s European-influenced Penthouse pretensions to “art,” Flynt discarded all restraint and instead delivered smut without apologies, displaying women in spread-eagled gynecological close-ups. At a time when the ensuing battle between Hefner, Guccione, and Flynt for supremacy in the commercial skin-mag market was at its most fierce, a woman named Judith Reisman noticed that pedophile-related themes were being presented in these mass-market publications openly sold at many convenience stores.

Reisman, with a Ph.D. in communications, subsequently authored an exhaustive study, funded by a grant from the Reagan-era Justice Department, entitled “Images of Children, Crime and Violence in Playboy, Penthouse and Hustler.” At just about the same time, coincidentally, it was disclosed that a performer known as Traci Lords, who had been hailed as “the Meryl Streep of the porn industry,” was in fact 17-year-old Nora Louise Kuzma. She was first molested at age 10 and later promoted as an “adult” movie actress by her mother’s ex-boyfriend, a California cocaine dealer. Beginning her pornographic career as a 15-year-old high-school dropout, Lords appeared in dozens of X-rated flicks in a year and a half before it was discovered in 1986 that she was a minor. The resulting scandal — combined with Reisman’s controversial study, as Attorney General Ed Meese was prepared to wield federal authority against the “adult” industry — inspired a backlash. Many stores, particularly the 7-Eleven chain, discontinued selling skin magazines. Civil libertarians complained about the backlash, intellectuals derided it as a “moral panic,” and the cultural Left denounced this as prudish “repression” to appease Christian conservatives. Nevertheless, the remorseless advance of smut seemed to have been halted and the nation alerted to the menace of kiddie porn, but then the Internet came along in the 1990s.

We have become sadly accustomed to regular reports about arrests for Internet child pornography. Earlier this month, for example, there was a massive federal operation that resulted in the arrest of 255 people on such charges. What has escaped notice, however, is the unrestricted online availability of every other sexual weirdness imaginable. Some of this digital smut features young adult females (advertised as “teens” or “barely legal”) wearing schoolgirl outfits and ponytails and … well, as Anthony Weiner wrote to his young online friend, “smooth.”

The complete depilation of the genital region, a trend heavily influenced by porn, is nowadays reported to be quite fashionable among sexually active young women. One may gather from anecdotal testimony that waxing or shaving to achieve a simulacrum of prepubescent hairlessness is now nearly de rigueur for truly trendy 20-somethings. This is the “new normal,” the stylish grooming for ladies seeking casual hook-ups in a sexualized youth culture where sending nude self-portraits via cellphone is actually quite a common form of “romantic” behavior. Married middle-aged parents are often oblivious (and perhaps deliberately so) about the mores and manners of the young. Sex trends are the subject of shocking headlines when some starlet’s private nude photos accidentally become public or when (as with the Steubenville, Ohio, rape case) evidence of sexual crime is circulated via online social media networks. Whether the perverse has been normalized or normality has become perverted is an interesting debate we might entertain at some future point. For now, however, there is the matter of a middle-aged married candidate for mayor of New York City who is revealed to have engaged in a “virtual relationship” with a 22-year-old girl who said she thought she was in love with him. And she apparently thought nothing particularly creepy was going on when this grown man inquired whether her pubic area was “smooth.” Her answer: “Very.”

Did I mention that Anthony Weiner is a Democrat? Republican politicians have occasionally survived sex scandals, but only a Democrat could expect to survive after being caught twice. And only a Democrat could, after such a humiliating revelation, hold a press conference and say that his plan was to “move forward,” bringing along the wife he had so deliberately betrayed, expecting her to stand beside him and avow her continued devotion to him. (How smooth, indeed.) By routinely excoriating Republicans as horribly repressive anti-sex zealots, Democrats have managed to convince a lot of Americans that there is no real danger to our society from creeps and perverts and rampant promiscuity. No, say the Democrats, the real danger is that those reactionary Republican bigots might “turn back the clock” and deprive America of such glorious pleasures as abortion, sex education, pornography and casual hook-ups arranged on the Internet. Last week, a 16-year-old prostitute showed up to meet a client who had hired her services online; some dispute about the nature of those services resulted in the teenage call girl getting thrown off the roof of a three-story apartment building in Brooklyn. We can’t say for certain that the dissatisfied customer was a Democrat, but it’s a good guess.

Two years ago, Patrick Frey wrote extensively at his Patterico blog about evidence suggesting that Weiner had been involved in online relationships with underaged girls. Frey believes that this helped undermine support for Weiner among Democrats during the 2011 scandal. Nancy Pelosi and Debbie Wasserman-Schultz might be able to tolerate — as a purely private indiscretion — Weiner’s cybersex with consenting adults, but a high-school girl? No way. Within a week of that revelation, Weiner was compelled to resign. Once the glare of the spotlight turned away, however, very strange things began to happen. There arose a sort of an online cult movement devoted to the idea that Weiner, despite his confessions of guilt and public avowal of responsibility, was in fact the victim of dirty tricks. These so-called “Weiner Truthers” blamed Breitbart and claimed that somehow Republican operatives had manufactured the scandal that brought down the progressive New York congressman. Among the demonized villains in this conspiracy theory were Frey and a New Jersey man named Mike Stack who had been one of the first to call attention to the Twitter message that began the scandal that brought down Weiner. A week after Weiner’s resignation, Stack says he was SWATted and about a week after that, on July 1, Frey was SWATted. Suspicions about who might have been responsible for these events are quite interesting, but the FBI hasn’t apprehended anyone for what Frey has called a “campaign of political terrorism” and, with few exceptions, mainstream journalists have ignored that story.

Meanwhile, as Frey shows by a timeline on his blog, mainstream journalists (including People magazine and the New York Times) were willing enablers of the political rehabilitation of Weiner, even as the ex-congressman continued to pursue his kinky habits with the young Indiana girl and perhaps others. Democrats and their media allies now pretend to be shocked — shocked! — that Weiner could have embarrassed them again. They likewise pretend that Weiner’s personal perversion is unrelated to his progressive political agenda. Yet these same journalists and politicians are adamantly in favor of the “liberated” sexuality that Weiner symbolizes. Liberals never hesitate to denounce as intolerant sex-hating busybodies those Republicans who dare speak ill of prostitution, pornography, sodomy, abortion, and other such “rights” dear to Democrats.

It’s interesting how Democrats are permitted this double standard: They defend the “right” of people to do what Anthony Weiner did (and do much worse), yet pretend they are not actually in favor of them doing it. Therefore it is best, from the liberal perspective, that no one make too much of the lurid details of Weiner’s antics, nor examine the effort to intimidate Weiner’s critics, nor suggest that Weiner’s persistently abnormal appetites are closely related to his status as a loyal Democrat. Any decent parent would be outraged at the thought of married middle-aged men secretively sending Internet messages to ask if their daughter’s crotch is “smooth,” and no decent parent would ever vote for the Pervert Party.