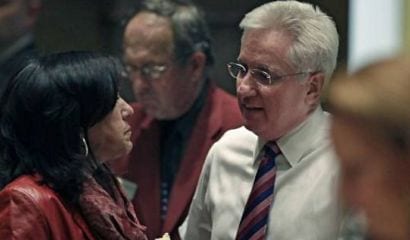 In nearly 140 years of Colorado history, it’s never happened before. This year it is happening twice: Two legislators, both Democratic members of the Colorado State Senate, will face recall elections after the Democrat-controlled legislature, bullied by New York City Mayor Michael Bloomberg and Vice President Joe Biden, and supported by Governor John “I’m a Moderate” Hickenlooper, passed heavy-handed and unpopular restrictions on gun rights in the Centennial State.

The senators in question are Angela Giron (Pueblo) and John Morse (CO Springs), the latter being the current President of the Colorado Senate. While the anti-gun laws were the precipitating event for the recall, Giron and Morse also angered constituents in their moderate districts by consistent support for a leftist agenda — including a massive tax hike, renewable energy mandates, and in-state tuition for illegal aliens — more appropriate for (or at least expected in) New York City than Colorado.

The restrictions in question require background checks for every gun sale, including between individual citizens (along with the imposition of a state fee for each background check), and ban the purchase or transfer of magazines that hold more than 15 cartridges.

Although the state’s Attorney General, John Suthers, has said he will not enforce the magazine ban as intended by its drafters, the measure was intentionally written to prohibit smaller magazines that could theoretically be modified to hold more than 15 rounds, effectively banning the most common magazines for the most common pistols in America.

Furthermore, the law requires “continuous possession,” meaning that while you can lend your gun to somebody, you cannot lend along with it a magazine that falls under the ban, nor can you sell the magazine or even pass it down to your children along with the gun that requires it. The ban is intended, over time, to turn as many guns as possible into expensive paperweights.

As is typical where you find grassroots efforts against Democrat politicians, and as even the New York Times admits, “Ms. Giron and Mr. Morse are raising and spending far more than their opponents,” including “$35,000 apiece from the Sixteen Thirty Fund, a Washington group that supports liberal and environmental causes,” as well as $3,500 each from the nation’s largest government workers’ union, AFSCME. This despite Jim Elson, the former president of AFSCME 123, signing the petition to recall Senator Giron, telling the Denver Post, “Guns isn’t the only issue, but it was the final straw.”

Liberal groups are not in a complete panic, however, because even replacement of both Morse and Giron would still leave the senate with a Democratic majority, albeit by a single seat, through 2014.

The hypocrisy is palpable, but then accusations, or even proof, of hypocrisy have never slowed down Democratic rhetoric in Colorado or anywhere else.

I spoke with Laura Carno, a Colorado Springs conservative activist whose organization, I Am Created Equal, provided funding to those working on the recall. According to Carno, contributions to her group (which she then used to help fund the recall effort) came from a mix of small and large donors, none of them came from out of state, and none from the NRA — though she emphasizes she would gladly accept a contribution from that particular group.

The desperate pro-Morse group also repeatedly tried and failed to disprove the legal validity of the recall petitions, leading Denver District Court Judge Robert Hyatt (not known as a friend of Republicans) to note that “the proponents for the recalls unquestionably made a good faith effort” to ensure the petitions were properly executed.

Pueblo, a heavily Democratic city in south-central Colorado, is seeing the most effective conservative organization it — and perhaps any other part of Colorado — has ever seen, brought unexpectedly by a 28-year old, tattooed, bearded plumber named Victor Head (a principled, committed young man whom I had the chance to meet on Saturday).

Mr. Head, angered by the assault on his fundamental rights, understood — again unusually for a Republican — how to bring the 21st century, particularly smartphones, to bear on the electoral process. As the Denver Post put it, “Political observers predicted he would never collect enough signatures, but Head and his allies, including two other plumbers, one of them his brother, saw the technology as a viable tool to make the recall effort a reality.”

Despite the massive outspending of the pro-Giron forces against Mr. Head’s grassroots efforts, and despite the roughly 2-to-1 Democratic registration advantage over Republicans in that district, Ms. Giron stands a good chance of being recalled.

Forty-five miles north, Senate President John Morse is in even bigger trouble. Although his senate district includes the quirky (and liberal) town of Manitou Springs, John Morse won his 2010 election by only 252 votes in a race in which a Libertarian candidate won five times that number. In other words, if not for the presence of a third party candidate, Mr. Morse would likely have lost; this is not a safe “blue” seat, despite redistricting since 2010 having made the district lean slightly more Democratic than its prior configuration.

Mr. Morse’s most recent campaign advertisement, called “Serve and Protect,” showing Morse in his former police uniform, discusses his prior service as Chief of Police, complains about the cost of the recall election, and scrupulously avoids any mention of his unpopular votes for restrictions on gun rights.

There is more to Mr. Morse’s troubles than the anti-gun bills he shepherded through the senate: He sponsored (but eventually withdrew due to the opposition of three senate Democrats) a bill that would have attached liability for a crime committed with any rifle (other than a bolt-action rifle) to the gun’s manufacturer and seller, in addition to the person charged with the actual crime.

It would also have attached liability to the rifle owner if his gun were stolen and used by a third party in commission of a crime, if the government claimed that the rifle was “negligently stored.” My description is somewhat too polite, as Morse did not describe the rifles as rifles, but rather — no doubt taking marching orders from Michael Bloomberg’s anti-gun lobbyist, whom I was introduced to at the State Capitol during the hearings on these bills — as “assault weapons.”

But perhaps most galling, even to Morse’s liberal constituents, were comments he made on MSNBC’s Rachel Maddow show in which he proudly said (while claiming the mantle of Abraham Lincoln) that he counseled fellow Democrat senators to avoid reading e-mails from constituents. To be fair, Morse probably assumed that nobody was watching the show.

When it comes to residents of his district who object to Democrats’ infringements on Coloradoans’ Second Amendment rights, Morse feels free to ignore them because, in his ignorance-is-strength world, he “knew darn good and well that’s not true.”

On September 10, voters in Pueblo and Colorado Springs will be able to vote on two questions: Should their respective senators be recalled, followed by a choice of replacement candidates. The second question will only be tallied if the first question results in a recall.

At this time, no other candidates have qualified to be on the ballots, but ballot access may yet remain a contentious question. There are different provisions in state regulation versus the state constitution regarding the deadline to appear on the recall ballots, with the regulation being the earlier deadline and one that has already passed.

The Secretary of State’s office has issued a notice that they intend to abide by the regulatory deadline, meaning that no other candidate will be placed on the ballot unless a court order requires the state to use the constitutional deadline of “not less than 15 days” prior to the election — a date that would be logistically difficult or impossible because this will be a mail-only election with ballots soon to be printed and mailed to voters.

Based on their interpretation, the Secretary of State has rejected a “successor candidate petition format” from a would-be Libertarian candidate in Morse’s district — for which I am grateful given the impact of that party’s presence in Senate District 11 in 2010. They have also rejected an initial request from a Democrat in Pueblo. It remains to be seen whether either of these, or someone else, will bring a constitutional challenge and, if it occurs after ballots are printed or mailed, whether a judge would offer any remedy.

In Colorado, even a write-in candidate must be approved in advance by the Secretary of State’s office. So as of this writing it appears possible, even probable, that the only candidate available to replace each Democratic senator, if he or she is recalled, would be a Republican.

For Senators Morse and Giron — particularly the former — it seems unlikely they will return to the State Senate in its next session. Although just the occurrence of the recall elections is remarkable, nothing says “history will remember me” as having so completely earned — by behaving as if they were legislating in Manhattan or San Francisco — being the first members of the state legislature ever to be recalled in Colorado.