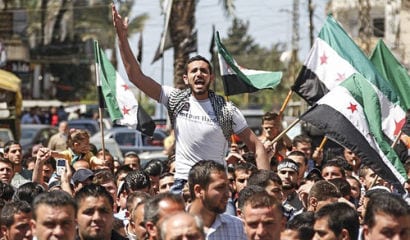 BEIRUT — Many have worried that the Syrian conflict would spill over the border into Lebanon. Some would argue that it already has.

The Sunni-Shiite conflict has threatened to engulf the Middle East, and is currently playing out most dramatically in Syria between the largely Alawite (and Shiite-aligned) Bashar al-Assad regime and the largely Sunni rebels. Now it seems to have landed here, on Lebanon’s front door, an unwelcome gift from their much larger neighbor to the east and north. Recent explosions and rocket attacks have targeted Hezbollah strongholds around Beirut, with radical Syrian opposition groups taking the blame. This has created consequences for Hezbollah’s intervention on behalf of the Assad regime in Syria that the Lebanese government is unable or unwilling to inflict.

Since its independence in 1943, Lebanon has, voluntarily or not, been tied to events in Syria. Syrian troops came to occupy Lebanon during the latter’s bloody civil war in the 1980s until a popular uprising forced them out in 2005, following the brazen assassination of former Prime Minister Rafiq Hariri. This set off a string of assassinations of anti-Syrian politicians and journalists — primarily Sunni and Christian, likely Bashar al-Assad’s parting gift to his much smaller neighbor. (The Syrian government has never been formally implicated in any of these assassinations, but is believed by many to have helped, if not ordered, its Lebanese ally Hezbollah or other proxies to carry them out.)

So now, as the Syrian bloodbath continues, Lebanon is trying to avoid returning to the senseless violence of their long civil war.

Recently, Lebanon’s premiere film director, Nadine Labaki, implored her countrymen to learn to live together in the beautiful film Where Do We Go Now? The problem is, she was speaking to the wrong audience. The film’s setting, a village of Christians and Muslims living side-by-side and drawn into sectarian fighting, was an apt analogy for the Lebanese Civil War. But the conflict has changed, and unfortunately Hezbollah — which dominates the Shiite political sphere in Lebanon — and the increasingly active Sunni Islamist Salafist groups, seem to have been too busy fighting each other in Syria (and increasingly in Lebanon) to watch the movie.

The so-called “Baabda Declaration,” which Lebanese President Michel Suleiman has attempted to use to preserve Lebanon’s stability, calls on all Lebanese parties to avoid involvement in the Syrian conflict.  But the declaration quickly fell apart as Hezbollah intervened to save their benefactor Bashar al-Assad, and young Sunnis traveled to fight in Syria’s anti-Assad revolution, inspired by radical preachers like Lebanon’s own skiing sheikh Ahmad al-Assir, whose strange relationship with Arab-pop-star-turned-radical-Islamist Fadl Shaker is too far-fetched for the next season of 24.

In the midst of this mess, the Obama administration has been largely absent. While any attempt to isolate Hezbollah by its Lebanese opponents brings instant accusations of American meddling in Lebanese affairs by Hezbollah and its backers, the U.S. seems to be a nonentity in shaping events here. Canned statements from outgoing Ambassador Maura Connelly condemning whatever the latest violence might be read: “We remain committed to Lebanon’s sovereignty, independence and stability because in a truly sovereign Lebanon, in a truly independent Lebanon, in a truly stable Lebanon, terrorism in Lebanon will not thrive.” I’m sure Hezbollah’s leader Hassan Nasrallah and the young Sunni jihadists marching to Syria were trembling in their boots. The European Union, for its part, recently added Hezbollah’s military wing to its terrorist list, then promptly seemed to apologize for bothering the organization and sent its representative in Lebanon to meet with its international relations guru, Ammar Musawi. Besides, as Musawi told EU representative Angelina Eichhorst, “Everyone knows that Hezbollah’s political and military wings are the same.” Nasrallah mocked the decision, saying, “In the next government, Hezbollah’s ministers will be of the military wing of the party.”

This tiny nation of four million Sunnis, Shiites, Christians, and any other sect you can think of has suddenly found up to a million Syrians renting much of the available cheap housing, working for less than Lebanese will take, and straining an already crowded country. The presence of Palestinian refugees upsetting the sectarian balance after fleeing from Israel was one of the principal causes of the Lebanese Civil War. Meanwhile, Hezbollah appears to see the survival of Bashar al-Assad in Syria as essential to the group’s continued relevance in the region, while Sunni jihadists see the revolution against al-Assad in Syria as their own fight, joining a conflict where they are no longer one more minority in Lebanon’s strange sectarian makeup, but instead part of the regional Sunni majority that has asserted itself during the Arab uprisings. And the traditional opponents of the Assad regime, forming the so-called March 14 Alliance and comprised primarily of Sunnis and Christians, find themselves increasingly caught between these competing extremes and trying to assert that, for all its faults, the Lebanese army is the only legitimate armed force in the country.

For its part, the U.S. apparently agrees with the March 14 Alliance, promising to send just short of $100 million for “peace and security” issues by the time 2013 is over. It is unclear, however, if President Obama will ever condition that aid on the army attempting to curb Hezbollah’s arms, which it has been unwilling (and probably unable) to do up until now. Shiites who try to speak out against Hezbollah’s dominance within their own sect have not been treated kindly, as Hezbollah recently killed a Shiite anti-Hezbollah/Iran/Assad protester outside the Iranian embassy in Beirut.

Despite all this, Lebanon stumbles on for now, and has thus far avoided descending into chaos, despite the best efforts of those intervening next door in Syria. For the sake of those who have learned from Lebanon’s bloody past and are working to build a better future for their children, here’s to hoping that a seemingly impossible solution in Syria can bring some needed calm to its smaller neighbor next door.