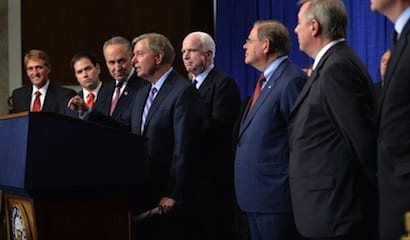 Immigration is different. For 20 years, Republicans have come together to oppose higher taxes. Paul Ryan’s budget won the votes of all but two Republican members of Congress. Tort reform, deregulation, property rights, school choice, religious liberty, and even free trade unite almost everyone in the GOP.

Hostility to immigration has traditionally been a union cause. The first American law limiting immigration was the Chinese Exclusion Act of 1882, championed by labor bosses. Samuel Gompers, the president of the AFL-CIO from 1886 to 1924, strongly supported the Chinese Exclusion Act and urged Congress to similarly restrict Japanese immigration. Professor Vernon Briggs of Cornell University writes that “At every juncture and with no exception, prior to the 1980s, the union movement either directly instigated or strongly supported every legislative initiative enacted by Congress to restrict immigration and to enforce its provisions.” Union opposition to labor mobility also brought us the Davis-Bacon Act of 1931, which set minimum wage restrictions designed to stop the internal migration of black workers from the South to compete with white construction workers in the North.

Steve Sailer, himself a foe of immigration reform, has pointed out that in 1969, United Farm Workers union leader César Chávez led protests against illegal immigration. Senator Walter Mondale joined the march and the UFW picketed the INS offices to demand closure of the border—long before the Minutemen.

Union leaders believed that immigration challenged the monopoly rents they won through barring non-union members from union shops. Later, unions were joined by radical environmentalists who believed that more Americans were bad for Mother Earth, and that zero population growth, ZPG, could not be achieved simply by limiting the number of live births. Birth control would have to be matched with immigration control. Environmentalists, led by John Tanton, created three front groups—Numbers USA, the Federation for American Immigration Reform, and the Center for Immigration Studies—to act as a conservative mask for his environmentalist goals. The union/green coalition bullied ambitious Democrat politicians into opposing immigration reform, though it made sure to give the pols a pass whenever they made meaningless pro-immigrant speeches.

Speaking of ambitious politicians, as the late great Robert Novak reported in 2007 in the Washington Post, then-Senator Barack Obama cast the deciding vote to pass (49-48) a poison pill amendment crafted by the labor unions to kill the guest worker provisions in that year’s attempted bipartisan immigration reform bill. Obama killed immigration reform as a senator. And now? As president, he sat for 345 days in 2009 and another 365 days in 2010 with a 74-seat majority in the House and 59 and then 60 Senate votes and refused to organize a vote to pass immigration reform.

To this day, the AFL-CIO continues to fight against any meaningful provisions for high-tech and farm and dairy guest workers as part of any comprehensive immigration reform package. Its allies in Congress have fought those reforms in the present debate.

HOW DO CONSERVATIVES feel at the grassroots level? Polls vary in their wording, and so do results, but in a survey commissioned by pro-reform group FWD.us, more than 70 percent of “conservative Republicans” support, at least in theory, a bill based on the broad outlines of the Senate plan: strengthening border security, creating a guest-worker program, and providing eventual legal status for 11 million illegal immigrants. But one must always look past preferences stated in any given poll and consider the more elusive question of whether an issue is significant enough to change someone’s vote.

Election results over the past decade suggest that the anti-immigration bark is worse than its bite. In 2000 and 2004, George W. Bush was elected as an outspoken supporter of immigration. Pat Buchanan, who took a third of the GOP primary vote against tax-hiking Bush 41, ran as the Reform Party candidate in 2000. Highlighting his anti-immigration proposals, he won half a percent of the general election vote. In 2007, Bush pushed for immigration reform, and the Republican senator most vilified by restrictionists for supporting him was John McCain—who then won the GOP presidential nomination in 2008.

Richard Nadler studied the nine congressional districts along the Mexican border and found that three districts represented by Republicans who had supported comprehensive immigration reform in 2004, but switched to an enforcement only position in the 2006 elections, flipped to the Democrats. (These House Republicans saw a 22 percent drop in support from Hispanic voters. Rep. J.D. Hayworth lost a predominantly white district with a Hispanic population below the national average due to his hard pivot on immigration.) In 2008, 16 House seats changed hands following races in which the candidates had differing positions on immigration. In 15 cases, the candidate pushing for a more restrictive immigration policy lost to the candidate supporting reform.

The Arizona legislature passed strong anti-immigrant legislation in 2010, but that bill’s sponsor, State Sen. Russell Pearce, was recalled by his voters. When he attempted a comeback, he was defeated 56 to 44 percent in the GOP primary. Arizona, supposedly the hotbed of anti-immigrant energy, also has two U.S. senators, John McCain and Jeff Flake, who are enthusiastic backers of immigration and immigration reform.

Listening to talk radio can give one a false sense of hearing the vox populi. A host can become quite successful and wealthy if even 1 percent of Americans listen to him. One cannot, however, get elected dogcatcher with 1 percent of the vote.

Most criticism of immigration stems from poor, and patently leftist, notions. These critics have failed to learn from American history that immigration is our greatest competitive advantage against other nations. They fall for the old Sierra Club line that people are a liability. But more babies born in America do not make us poorer. Of course, other anti-immigration arguments exist, some of which might at first sound faintly conservative:

• “Immigrants will hurt America because every immigrant will over his/her lifetime receive three dollars in Medicare for every one dollar he pays in Medicare taxes.” That would be a stronger argument if it were not also true of you and me and every baby born in America. We must reform entitlements by passing something along the lines of Paul Ryan’s budget, or our economy will collapse no matter how many immigrants we have. Putting a stop to immigration without addressing entitlements will only make the collapse come sooner.

• “Immigrants may go on welfare and become a fiscal drain on America.” But the Senate bill prevents the estimated 11 million illegal immigrants who will be granted legal status from receiving any federal benefits for at least a decade. Again, if welfare is not addressed in a decade’s time, we will have a date with Greece regardless of our immigration policy.

• “We are a nation of laws. Enforcement first.” Should we hunt down, arrest, and deport 11 million adults and their children before we even think about reforming our border security and immigration policies? Hmm. Back in the 1970s speed limits were 55 miles per hour, 20 miles per hour lower than should have been, and indeed, than they eventually became. Needless to say, a great deal of illegal driving was going on. Did it make sense to arrest or fine every solitary violator before changing the law and raising the limit?

Our great nation has benefited and will benefit from higher levels of legal immigration. Today we are leaving talent on the table: brilliant young minds who create businesses that compete with us. We have crops rotting in some fields and others left fallow. Smart nations reform flawed laws.
If we do this right, if we improve on the Senate’s opening bid, create a more effective and less costly border security system, and increase the scrawny limits proposed on highly skilled and educated immigrants and guest workers in farming, dairy, and construction, we will dominate the planet for the next century. Our would-be competitors have forgotten to have children and lack our 300-year proven ability to grow through immigration. We can. China cannot. Japan cannot. Europe cannot. We will grow as they shrink. Only we can stop us.