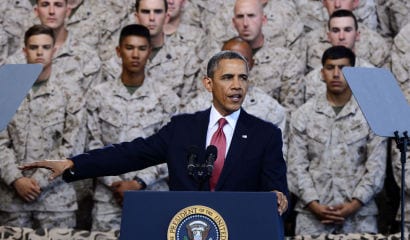 The upcoming fiscal fight’s political divide could not be greater — either qualitatively or quantitatively. While the philosophical gulf between higher taxes or lower spending is clear, its price tag is not. Comparing the savings from the last debt limit increase and Obama’s latest budget shows the distance between Republicans and the administration could be as high as $4 trillion.

Washington has two fast approaching fiscal deadlines. The first is October 1’s requirement for renewal of annual spending authority. The second is the need, currently expected in October or November, to raise the limit on the federal government’s borrowing authority.

While each deadline’s particulars may differ, we know all too well the philosophical differences separating the parties. Simply: Obama will want increased spending and taxes; Republicans will want decreased spending and taxes. These basic positions have not only hardened, but threaten to widen further when Washington takes up the fiscal fight in earnest after August.

Obama wants a “clean” debt limit increase, without other policy provisions included. Republicans will counter with spending cut demands. Obama will parry with tax hike demands. Republicans will respond with requirements for significant entitlement spending savings. At any point in this back and forth, either side could balk — and at some point both likely will.

However, the quantitative elements of dollars and cents are perhaps even more divergent than the ideological differences.

Because of the 2011 Budget Control Act, Washington’s annual spending has been effectively pre-determined through spending caps and sequestration’s cuts. Over the last year, Congress has reached an accommodation of sorts. Assuming that holds, the debt limit increase becomes Washington’s fiscal focal point.

What emerged two years ago this summer in the last debt limit increase deal was an agreement for $2.1 trillion in spending reductions over ten years — $900 billion by capping annual federal spending and $1.2 trillion from automatic spending cuts to designated federal spending programs.

It is logical that in the upcoming debt limit increase debate, Republicans will demand a similar level of spending cuts.

It is equally logical to assume the administration’s position will be its latest budget. Months late and largely irrelevant to this year’s spending process, its real value is as an insight into Obama’s fiscal preferences.

According to Congressional Budget Office estimates, the Obama budget would cut $1.146 trillion from the next decade’s currently projected deficit by decreasing spending $172 billion below, and increasing taxes $974 billion above, currently anticipated levels. With roughly 6-1 tax increases to spending cuts, Obama’s budget on its surface is a red flag to Republicans. However looking inside it, the flag grows even redder.

The Obama budget was able to drive its spending down by taking advantage of CBO’s estimating requirement that existing spending be extrapolated into the future. Thus Obama’s budget gets “spending savings” by assuming no continuance of overseas military operations ($601 billion) and no future emergency spending ($290 billion) — while CBO must assume both continue.

Waving the red flag even harder, the Obama budget also creatively drives annual federal spending down by $301 billion below CBO’s estimated level, by capping it beginning in 2017 — the year after Obama leaves office. This would come on top of the $900 billion cuts enacted in 2011 and would result in, quoting CBO’s report: “the lowest level in at least the past 50 years” relative to GDP.

The next provocation is $92 billion in “interest savings” coming from these spending reductions and tax increases — because the federal deficit would be reduced below CBO’s assumed levels.

The final straw for Republicans is what these “spending savings” are used for: overturning the sequester. To quote CBO’s analysis: “eliminating the automatic spending reductions that have occurred or are scheduled to occur under current law…”

Added together, these Obama tax hikes ($974 billion) and spending savings ($1.112 trillion) amount to $2.086 trillion that Republicans will never accept — almost exactly the $2.1 trillion in spending cuts they won in the debt limit battle two years ago.

The upcoming budget battle boils down to this: Republicans obtained $2.1 trillion over ten years in spending savings the last time; Obama’s latest budget eliminates the sequester, while containing elements that take fiscal policy $2.1 trillion away from Republicans’ position.

The qualitative divide between Republicans and Obama is paralleled by a $4 trillion quantitative chasm. How it can be bridged is hard to see now, and may become progressively harder to see as the fight unfolds.

Make no mistake: the numbers do matter. They take on an importance all their own and can be even more entrapping than the ideological differences they represent. They add another, and potentially harder, element to an already difficult dilemma. The fiscal fight is a philosophical one waged in dollars and cents. But from being a simple means of measure, these dollars can quickly become an end in themselves. And potentially one with no end in sight.