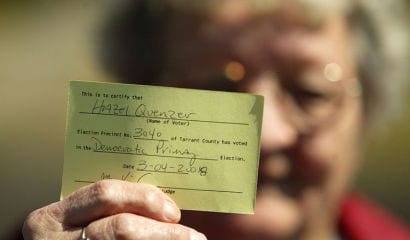 In Colorado, the results of Democrats valuing election “turnout” over electoral honesty — or even common sense — are becoming clear.

Among the many mindless laws passed on party-line votes during Colorado’s recent hyper-partisan legislative session — both chambers of the legislature being controlled by Democrats — is HB-1303, the “Voter Access and Modernized Elections Act.” The Act is a poorly considered measure designed to maximize Democrats’ advantage in elections, not least by maximizing the potential for voter fraud — which Democrats have proven far more adept at than Republicans for at least two generations.

HB-1303 was passed not only without a single Republican vote (on an issue that one would not assume should necessarily be partisan) but also without input from Colorado Secretary of State Scott Gessler, whose office is responsible for ensuring an honest and efficient election process. Supporters of the bill claim that county election clerks widely supported the bill, but Wayne Williams, the Clerk and Recorder of El Paso County (the state’s most populous county) voiced a strong objection, later adding that “there is no way to run a check through federal immigration or a felon database on election day.”

Judge Robert McGahey, in his ruling in favor of a Libertarian Party challenge to part of the ongoing recalls of two state senators (one of whom was the senate sponsor of the election “reform” bill), used the politest term possible in describing HB-1303 as “flawed.” But that doesn’t begin to describe the horror that passes for election “reform” where Democrats are concerned — and not only in the Centennial State.

It’s not just about confused thinking, such as requiring mail-in voting in recall elections despite a state constitutional right to candidate ballot access up to 15 days before the election — which makes mail-in ballot delivery somewhere between impractical and impossible, especially for overseas absentee and military voters.

Instead, the law seems aimed at enabling manipulation and fraud.

The worst provision in HB-1303 allows for same-day voter registration, an open invitation for multiple-voting and non-citizen (whether of the state or of the country) voting, as well as voting by felons — an effect that, whether intentional or not, must trump any potential increase in election participation. Furthermore, the perception of unfair voting is nearly as damaging to the electoral system as its reality; politicians and bureaucrats alike should emphasize election propriety above participation as the former will inevitably encourage the latter.

Republican State Senator Greg Brophy described the measure as turning us “into a banana republic” while Senator Kevin Lundberg said, “The proper title for this bill is ‘Same-Day Voters’ Fraud Act.’” These are especially true given that Colorado’s legal definition of “identification” when it comes to voting includes “a copy of a current utility bill (or) bank statement…”

The law requires mail-in voting, a system that itself is ripe for fraud because of the impossibility of having adequately accurate voting rolls. It will encourage the selling of ballots or the use of multiple ballots by a single voter whose other household members are apathetic or absent.

In a related vein, the law makes it more difficult to remove “inactive” voters from the rolls, increasing the chance that a ballot will be cast by someone other than the intended Coloradoan. If you are skeptical at the chances of this happening, note that many states, including Colorado, Utah, Illinois, Mississippi, Nebraska, and Ohio, have counties with more registered voters than residents. Yet in every case Democrats oppose scrubbing the rolls of ineligible (including dead and otherwise non-existent) voters because every extra ballot is an opportunity to steal an election.

The law allows the registration of 16-year-old children by high schools’ deputy registrars (though the kids still cannot vote until the age of 18). Democrats realize that mushy-headed high school students, desperately seeking acceptance by their peers and teachers alike, a disproportionate share of whom will be outspoken liberals due to the naivety of youth and the self-serving nature of those receiving government paychecks, will likely register as Democrats. Given that people tend in adulthood to remain supporters of the teams of their youth, whether in politics or in sports, roping in children is clever Democrat strategery but at least it is not an open invitation to fraud.

Much the same way that Obamacare destroys the health insurance system for the vast majority of Americans in order to address an overstated problem for some, Colorado Democrats’ election “reform” law was a solution in search of a problem.

At 70.3 percent, Colorado had the third-highest voter turnout rate in the 2012 elections, far above the national average of 58.2 percent. It strains belief that far more than 70 percent of voters actually want to participate; it does not strain belief that Democrat-supporting unions, lackeys, and other economic parasites will use every tactic, regardless of legality, to try to hijack elections. The combination of mail-in elections and same-day registration (though a same-day voter will obviously not vote by mail) poses unnecessary and large risks to elections with little value added to our democratic process.

Again showing the sad partisanship of voting law, the state of North Carolina, now controlled by Republicans, just passed its own election reforms that include ending same-day registration and limiting early voting (while expanding the hours and locations where early voting is accommodated).

But where North Carolina has Democrats in a full froth is their new, and utterly sensible, requirement to present a state-issued photo ID in order to vote. Voter ID is an issue that Democrats have somehow been able to oppose, without a shred of evidence, as a racist attempt at suppressing minority votes, without being laughed out of town halls across the country. As the Heritage Foundation’s Hans von Spakovsky noted regarding a challenge to Georgia’s Voter ID law, the trial judge concluded that “the fact that Plaintiffs, in spite of their efforts, have failed to uncover anyone ‘who can attest to the fact that he/she will be prevented from voting’ provides significant support for a conclusion that the photo ID requirement does not unduly burden the right to vote.”

In Indiana and Georgia, each of which passed controversial Voter ID laws, voter participation increased, including among blacks and Hispanics. A 2012 Washington Post poll showed that 74 percent of all adults, including nearly two-thirds of blacks and Hispanics, support requiring photo identification to vote and that voters, while considering voter suppression a problem (a matter of believing a lie because it’s been told so many times), recognize that voter fraud is a bigger problem.

In Pennsylvania, where a strict Voter ID law has been passed by the legislature and signed by the governor, courts continue to impede its implementation although it has been ruled constitutional. Last year, the day after a court upheld the validity of the law, the lead plaintiff in a lawsuit against it, 93-year-old wheelchair-bound Viviette Applewhite, went to a state office and got a photo ID (despite not necessarily having proper documentation, a discussion for another day) that she can use to vote, disproving opponents’ claims that getting an ID is prohibitively difficult.

Nate Cohn, a number-cruncher for the liberal New Republic, concludes that while Voter ID laws may nominally impact more Democrats than Republicans, their actual impact on elections is small because “many of the registered voters without a photo ID just aren’t voting and 40 percent of them are probably voting Republican.”

Liberals are also fuming over Kansas’s requirement that a potential voter prove citizenship before being allowed to register, a policy that is reportedly impacting about 15,000 potential voters in that state — though there is little reason to think that the impact should be preferentially for or against a particular political party. In response to criticism that the requirement amounts to voter suppression, Kansas Secretary of State Kris Kobach says dryly, “[Then] so is having registration in the first place.”

While realizing that my high school “social studies” class has since been replaced by pseudo-civics classes that teach little more than moral relativism and the horrors that have befallen “the real Americans” at the hands of “dead white men,” I well remember that voting is a responsibility and privilege to be earned, even to be worked for. It is not primarily a right in the sense that the Founders understood that term.

Unlike freedom of speech, where the benefit must go to the speaker in the case of any challenge to his ability to express his views, with voting the default policies must aim at ensuring that elections are honest, while secondarily maximizing participation.

It is not difficult to vote in the United States. If someone doesn’t care enough to register more than a month before an election, if someone is one of the minuscule number of Americans without any form of government-issued ID and doesn’t care enough about voting to get one for that purpose, if someone is desperate to vote many weeks before an election despite the possibility of so much more information becoming known, he simply shouldn’t be voting.

Perhaps the most disturbing aspect of the national discussion on voting law is the lack of consistent principled support for the most basic protections of electoral honesty, such as having to show a photo ID to vote. This should not be a partisan issue; the fact that it is says far more about Democrats’ intentions than about Republican “voter suppression.” That so many Democrats, including Hillary “Testing the waters, and they seem fine” Clinton, get away with calling Voter ID laws bigoted is sad evidence of persistent Republican fear of standing up for what is obviously right in the face of obviously baseless cries of “racism!”

Americans should be grateful that we don’t live in a nation like Australia, where voting is compulsory and a cash penalty imposed for non-participation. (With candidates even less inspiring than ours, I suppose they must impose this system in order to get double-digit voter turnout.) Still, one shouldn’t be surprised to hear liberals, including Peter Orszag, former head of President Obama’s Council of Economic Advisors, propose this very thing for our ever-less-free citizenry.

Mandatory voting is going nowhere fast in the USA. But in the meantime, when states like Colorado are pushed into prioritizing voter turnout over honest elections, the foundation of our electoral system — which is to say the foundation of a nation that prides itself on non-violent transfers of power between officeholders — is corroded, leaving a shaky voting edifice standing over citizens’ heads.