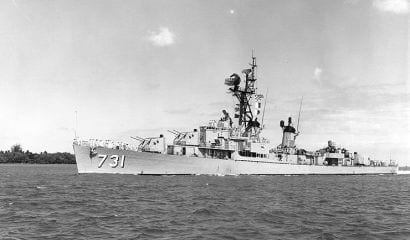 The Pentagon has been preparing for “a punitive strike” on Syria to degrade its chemical weapons capabilities and deter any further use of those horrible weapons.

The Navy has dispatched a fleet of four destroyers and a submarine all with cruise missile capabilities to the eastern Mediterranean in preparation for an attack which has been postponed pending a vote in Congress. Meanwhile, the aircraft carrier Nimitz and its strike force have steamed into the Red Sea as a further show of force prepared to join the growing armada.

The buildup of the fleet and the proximity of Syrian naval forces will bring a flashback to some who remember the spark that triggered our deepening involvement in the Vietnam War.

The second Tonkin Gulf incident, involving the USS Turner Joy, was originally claimed by the U.S. National Security Agency to have occurred on August 4, 1964, as another sea battle, but instead may have involved “Tonkin Ghosts” (false radar images) and not an actual torpedo boat attack.

In response to these two incidents Congress passed the Gulf of Tonkin Resolution, which granted President Lyndon B. Johnson the authority to assist any Southeast Asian country whose government was considered to be jeopardized by “communist aggression.” The resolution served as Johnson’s legal justification for deploying U.S. conventional forces and the commencement of open warfare against North Vietnam.

As they say, the rest is history. The Gulf of Tonkin Resolution ultimately resulted in the deployment of 549,500 U.S. troops to Vietnam and the tragic count of 58,209 dead and 153,303 wounded. It was a simple resolution that yielded a national nightmare with grievous consequences from which many are still trying to recover.

In addition to Vietnam, history speaks volumes about the dangers of overreacting to provocative incidents. “Remember the Maine” became the battle cry that led us into the Spanish-American War.

On February 15, 1898, the battleship USS Maine was shattered by two separate explosions and rapidly sank. Two hundred and fifty-two sailors were killed. The pride of the fledgling U.S. Navy, one of the first United States battleships to be constructed, was gone. The vessel’s destruction in the Cuba harbor of Havana was a catalyst that triggered war between the United States and Spain.

After the disaster, U.S. newspapers were quick to place responsibility for the loss on Spain. In spite of the newspaper propaganda, an official court of inquiry concluded that the ship was sunk by a mine which ignited the forward magazines, but stated that it could not fix responsibility, including the government or military forces of Spain.

Regardless of the reality of the situation, the loss of the Maine had turned American popular opinion strongly in favor of war with Spain. Despite his efforts to avoid war, President McKinley finally decided to militarily intervene in Cuba to end the ongoing unrest and “liberate” Cuba from Spanish rule. Ironically, later reports have revealed the possibility that the Maine sank as a result of a coal bunker fire adjacent to one of its ammunition magazines, and not a result of a Spanish mine.

Accidents and incidents often lead to events that spiral out of control. The fleet build-up in the Eastern Mediterranean off the coast of Syria has all the makings of a tinder box waiting for a spark.

In addition to his stockpile of poison gas, Assad has significant military hardware at his disposal. His navy and air force are substantial (the fourth largest military force in the Middle East, after Egypt, Turkey, and Iran) and may be deployed as a last resort, desperate response to the President’s proposed “punitive strike.” The Syrian navy consists of 2 Romeo class submarines, 2 frigates, 30 missile boats, 14 patrol craft, 3 amphibious attack ships, and 7 mine warfare vessels.

President Assad has already demonstrated his evil determination to preserve his dictatorial power at all costs by using poison gas to kill over 1,000 civilians including 100 children. The notion that he will stand idly by and absorb whatever “punitive” blows are launched at his country without response borders on fanciful. So, if we are determined to “punish” him for his use of poison gas on his own people, we better be prepared to go “all in.” I’m not at all sure we are.

Military strikes, no matter how carefully planned and surgically executed, too often lead to totally unexpected results. The “fog of war” and the law of unintended consequences can result in tragic quagmires of prolonged and expensive warfare.

We should all be very wary of heading down a path toward another Tonkin Gulf Resolution in the Eastern Mediterranean.