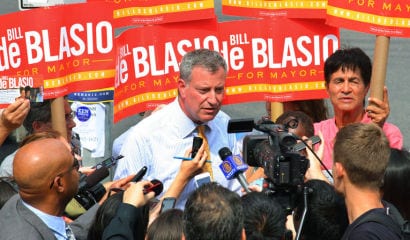 There was one big surprise in the New York City election: The party machine still rules the roost. Despite the brewing clamor that New York needed a change from the same old policies, New Yorkers overwhelmingly supported the establishment.

As of right now, Public Advocate Bill de Blasio has 40.2 percent of the vote, putting him just over the 40 percent threshold needed to avoid a runoff election with the 2009 Democratic candidate for mayor, Bill Thompson. City Council Speaker Christine Quinn went down in a resounding defeat, receiving only 15.5 percent of the vote, lower than anyone had expected.

Yet Quinn was expected to flame out for weeks now; at one point during the campaign she trailed de Blasio, Thompson, and even Anthony Weiner.

Outsiders to New York politics viewed Quinn as the favorite because of her multiple endorsements, including the New York Times, the late former mayor Ed Koch, and several major Democratic organizations. It was in fact de Blasio who was the machine’s choice all along: the SEIU, George Soros, the Nation, Governor Howard Dean, and many other liberal groups endorsed him. De Blasio may have been the most left-wing choice, but he was still part of the machine.

On the Republican side, Joe Lhota, right-hand man to Rudy Giuliani and the forgone favorite, defeated self-funded billionaire John Catsimatidis.

The other closely followed race was disgraced former governor Eliot Spitzer’s quest to revive his career and get elected city comptroller. Opponent Scott Stringer was overwhelmingly backed by the Democratic establishment; when it looked like Spitzer was going to be victorious, Senator Kirsten Gillibrand started campaigning on behalf of Stringer. Spitzer crashed and burned last night.

The Democratic machine turned out electoral victories in every borough president race, as well every city council race but one.

The sole outsider who was able to fight the establishment and secure a runoff was in the race for public advocate. State Senator Daniel Squadron, a protégé of Senator Chuck Schumer, came in second place to Councilmember Letitia James. Also in the race was Reshma Saujani, a 2010 challenger who seemed to be a rising star in the Democratic Party. While Squadron may have had the support of many establishment figures, such as Schumer, James had the backing of many in the black and Hispanic community as well as the Working Families Party.

Both candidates have their problems. Squadron is unappealing and boring, while James has been known to make racially stigmatizing statements. Nonetheless, it is encouraging to see someone fight the establishment to a draw, even if she sounds like a radical Black Panther.

On to November, it looks overwhelmingly likely that de Blasio will claim the nomination for the Democratic Party. Unfortunately, it also looks very likely that he will defeat Lhota.

Lhota is on the ballot under the Conservative Party, which will hurt him with moderate, pro-choice, pro-gun control, pro-gay-marriage Democrats who voted for Rudy Giuliani and Michael Bloomberg.

In the last poll taken in April, de Blasio leads Lhota by a whopping 40 points. If de Blasio keeps the momentum going to a November victory, it looks as New York’s time as America’s safest big city will run out.

As for Anthony Weiner, the disgraced congressman received only 4.9 percent of the vote, despite his repeated claims that he had a good chance to win. His defeat should send a message to countless other politicians: Flashing your private parts is not a launch pad for bigger and better things.

But this writer predicts that Weiner will try again. I fully support a Weiner candidacy for governor in 2014 and even president in 2016.  As Lawrence O’Donnell so beautifully put it, “something is psychologically wrong with him” and he can’t help but run for public office. For the Democratic Party, Anthony Weiner is political herpes, and to quote my friend and Republican strategist Amanda Kohut, “Unfortunately there’s no such thing as electoral Valtrex.”