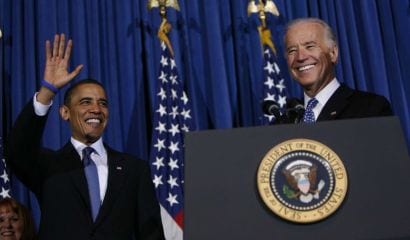 Remember that March day in 2010 when the President, surrounded by devout supporters, solemnly signed Obamacare into law? It was, as Joe Biden brayed, “a big f—–g deal.” Obama and his army of righteous reformers had finally triumphed over the forces of evil and passed legislation that would drive the moneychangers from the temple of U.S. health care. Many of those beaming down on the President as he wielded his terrible swift pen represented prestigious national organizations and coalitions whose support had made the glorious moment possible. Some of these groups, however, have since seen the error of their ways.

The most recent such coalition to repent of its support for the “Affordable Care Act” (ACA) has been the AFL-CIO. As has been widely reported, that federation of unions approved a resolution during its recent convention declaring that Obamacare will increase health insurance premiums so dramatically that many of its members will have to drop their coverage. In order to avoid this inevitable consequence of their support for the health care law, union goons like Richard Trumka have been putting pressure on the President to honor his backroom promises to provide unions with special dispensations from inconvenient provisions of “reform.”

One of the most controversial union demands, which would have resulted in extra ACA subsidies for union members, was rejected by the Obama administration on Friday: “The Treasury Department issued a letter that confirmed that people in multi-employer healthcare plans could not receive the Obamacare tax credits.” This letter merely reiterated the clear language of the law, but the union bosses are not amused. Terry O’Sullivan, president of the Laborers International Union of North America, has even begun using the “R” word: “If the Affordable Care Act is not fixed… then I believe it needs to be repealed.”

The AFL-CIO was not, of course, the only prominent national organization to get suckered by the Obamacare confidence game. Another of its notable victims was the American Medical Association (AMA). The Democrats desperately wanted their “reform” project to benefit from the public relations advantages that come with the AMA’s stamp of approval. And this Democrat need for the AMA’s support on Obamacare seemed to provide the physician organization with political leverage that it could use to force Congress to fix a problem with the Medicare physician reimbursement system — the sustainable growth rate formula (SGR).

SGR was created by Congress to slow the growth of Medicare spending. It failed because Congress has prevented it from going into effect with a long series of temporary postponements. Thus, the cumulative payment cut mandated by SGR grew every year and hung over the physician community like the Sword of Damocles, hanging by a single hair that Congress could cut at any time. Thus, when the Democrats came to the AMA for its support on Obamacare, the group decided to climb into bed with them in exchange for an implicit promise to repeal and replace SGR with a payment system that tracks medical inflation rather than GDP.

It hardly needs saying that a solution for the SGR problem was conspicuously absent from the law the President signed on that fateful day in March. Even worse, the Obamacare cost estimates promulgated by the Democrats assume that SGR will stay in place. Three years later, the AMA is still waiting for its check to arrive in the mail. As recently as August 29, Healthcare Finance News published an article titled, “AMA President Hopeful on SGR Fix.” The article points out that the cumulative cut in Medicare reimbursement that now hangs over physicians is up to 25 percent, and refers to AMA president Ardis Dee Hoven as an “admitted optimist.”

The AMA and the AFL-CIO are just the most prominent members of the not-very-exclusive society of organizations and individuals duped by the White House into supporting Obamacare. This club’s membership also includes the American Hospital Association (AHA), which ostentatiously supported the reform law and even endorsed the egregious Donald Berwick for the post of CMS administrator. The AHA’s reward for this idiocy has been deeper cuts in hospital payments than it agreed to accept in its deal with the Obama administration and the additional financial burden imposed by the postponement of the employer mandate.

Another member of Obamacare’s guild of gulls is Big Pharma. The Pharmaceutical Researchers and Manufacturers of America (PhRMA) spent $150 million on an ACA advertising campaign. The drug industry’s return on this investment? As Keith Speights has pointed out, “For starters, the drugmakers must provide higher rebates to Medicaid for prescription drugs. This expanded rebate program will cost the industry around $20 billion over the next 10 years.… Filling part of the Medicare Part D ‘doughnut hole’ will cost another $30 billion.” The industry has also been hit with an excise tax on branded drugs that will cost yet another $30 billion by 2021.

Not all of the Obamacare double-crosses have been financial. Some have been moral. The Catholic Health Association (CHA) was an extremely important backer of the “Affordable Care Act.” Its CEO, Sr. Carol Keehan, received one of the pens the President used to sign the legislation. CHA’s reward was the HHS contraception mandate. Keehan was horrified by that outrage, but later decided to use Obama’s fraudulent “accommodation” as a veil under which to hide the humiliation to which she had been subjected by the President’s HHS minions. Other Catholic leaders denounced Keehan and CHA for this act of moral cowardice.

The “leaders” of the CHA, Big Pharma, the AMA and the AFL-CIO constitute but a sample of the useful idiots exploited by the President and his congressional accomplices in order to foist Obamacare on the American public. The list of dupes goes on and on. They got presidential pens and photos of themselves grinning at the man who took them in. If they have any capacity for introspection, they also feel shame. Some have publicly repented of their support for Obamacare. Most still pretend they did the right thing. It may be an insult to the intellectually impaired to elevate such people to the level of “idiot.”