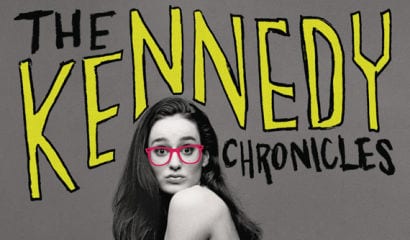 “The entire time I was at MTV,” nineties video jockey Kennedy writes in her autobiography, “I was drug-, alcohol-, and smoke-free, a vegetarian, and a virgin.” In other words, the girl in granny-glasses led a terribly boring life for a granny, let alone for a single twentysomething in Manhattan. On the air, and in her book The Kennedy Chronicles, she compensates by acting out.

One who so wants to grab our attention occasionally succeeds in capturing it. Famous because of her proximity to fame, Kennedy naturally hates on a “who’s who” of ’90s stars. We despise our benefactors.

The former host of Alternative Nation describes Thom Yorke as “an overly sensitive pretentious ass who thought he was a special flower long before Radiohead blossomed, and yet another in a growing list of geniuses annoyed by my ordinary existence.” She accuses MTV colleague Tabitha Soren of being an “insane drama queen” with power-forward-sized feet. Of the former heavyweight champion, Kennedy discloses: “To this day I am very glad Evander Holyfield got his ear munched.” The author reserves a cache of arrows for Kurt Cobain’s Yoko Ono. “She wasn’t an ‘it girl’ or a ‘party girl,’ more of a ‘s–t girl’ whose ambition immeasurably exceeded her actual talent,” she says of Courtney Love, elsewhere adding that “to this day I truly believe the wrong Cobain died April 5, 1994.”

She likes a few famous people, too. Emerging from her sharp pen intact are Kurt Loder, Jenny McCarthy, Bill Bellamy, and Johnny Rzeznik, The Goo Goo Dolls frontman who returned Kennedy’s affections by writing the hit song “Name” about the MTV VJ. But like a grunge-era Alice Roosevelt Longworth, Kennedy generally denigrates the celebrated. This includes the network that employed her, which took a politicized turn early in her five-year tenure.

“I will never be able to drown out the sound of my fellow VJ John Norris’s incessant whining as he’d flip open the New York Post and complain about their conservative editorial page,” writes the girl with the elephant tattoo, “then he’d smirk over the side of his paper and lob passive-aggressive bombs [at] me, ‘You’re a fascist in training, you must love this rag!’ He’d also bitch about the weather, the traffic, the wardrobe, anything. I would look out the window and pine for a hearing impairment or a sudden onset of schizophrenia so some new, disturbing voices could drown out his drone.”

The author portrays MTV News as a booster outfit for Democrats, a “charade” of impartiality that she saw through immediately. “MTV was a cash cow whose bulging teat filled Sumner Redstone’s coffers and silos with minty fresh greenbacks,” The Kennedy Chronicles explains. “Our popular president, Judy McGrath, was having an unashamed love affair with MTV News and its landscape changing Choose or Lose campaign (a phrase hardly directed at Young Republicans), and she was able to direct money to specials and segments, turning MTV into a force of nature that flattened and trivialized most other 1992 election coverage. Bill Clinton was wise beyond his years to embrace MTV, and George H.W. Bush looked like a disinterested old fool unable to hide his contempt when he finally capitulated to an interview with Tabitha [Soren] on the back of a moving train.” She opines that “Choose or Lose” might have been more honestly called “Choose Clinton and Lose Bush.”

Kennedy’s appeal harkened back to MTV’s roots. She couldn’t boast Duff’s dimples or Simon Rex’s abs, to name two contemporaries on the channel. She possessed something more attractive to MTV viewers. She shared their musical interests when the initialism still stood for Music Television. Her identity remains entwined with alternative rock in the way that Molly Ringwald or Martha Quinn evokes synth-driven New Wave. Given that she showed up at MTV during perhaps the height of its influence and departed when the few videos broadcast (Britney Spears, NSync, Backstreet Boys) broadcasted rapid pop cultural decline, Kennedy might with accuracy be called “the last VJ.”

The memoir is a don’t-kiss-and-tell. She perceives a green-room spark between her and Henry Rollins. She waxes on about a backstage glance with Soundgarden’s Matt Cameron. We learn that she rejected Quentin Tarantino’s overtures for a date and that Michael Jordan once flirted with her. Eight years before the advent of MTV, the Rolling Stones named this phenomenon in the song that concludes “Goat’s Head Soup.” The number has Kennedy’s number, describing her memoir perfectly if only she had bedded, or even kissed, the famous men on whom she dishes.

Befitting her mercurial style, Kennedy sharply pivots from not-enough-information to too-much-information. Recalling when Dave Navarro managed to persuade her to skirt the edges of her virginity, Kennedy reinvents herself as soft-core pornographic novelist, describing how the Jane’s Addiction’s guitarist “coaxed his bratwurst into giving me free condiments.” Such unpleasant imagery unnecessarily mars the book. Kennedy is that rare combination, the vulgar prude.

The Kennedy Chronicles is too much author, not enough book. She crams a chapter’s worth of adjectives in every paragraph and the busy prose, like the network that made her a star, distracts. The style overruns the substance. Kennedy’s over-the-top persona meshed seamlessly with the ADHD-inspiring videos she once introduced in her in-studio snippets. What made her perfect for fifteen seconds of banter wears thin over a 314-page book.