“What is truth?” Such was the question asked by the Roman governor of Judea of a man who stood before him, a man whose death at Rome’s hands would signify a great beginning. As they have for many, many centuries, Catholics still speak the name of Pontius Pilate when they recite the Creed at weekly Mass. Why?

To establish the fact that Jesus Christ was a real man put to death by a real government, at a real place and specific time. But the historical Jesus of the Creed is far different from the one portrayed by the modern media and academia. Every Christmas and Easter season, these two groups combine to produce new and more controversial “truths” about Jesus and his Church.

This week’s release of The Da Vinci Code movie has merely upped the ante. But unlike Mel Gibson’s The Passion of the Christ, this flick is being heralded as the veritable second coming. Missing are the prophecies that this movie will lead to Christians rising up to kill albino monks in the streets, though a protest by the National Organization for Albinism and Hypopigmentation is apparently a cause for concern. After all, it’s acceptable and even profitable to scandalize millions of Christians, but lay off those albinos!

I decided to read Dan Brown’s book with a sense of trepidation, uneasy that the Gnostic heresies which undergird much of it might be presented in a way that could attract Christian converts. But in fact, the Code is nothing more than a formulaic retread of modern bestsellers: a fantasy world where all the good men are sensitive feminists, the religious are mindless robots, the women are goddesses, and the artists are gay.

The problem with Brown’s book is not so much the noxious dose of radical feminism or even the Gnostic nonsense; it’s that it’s just plain bad mystery writing. He starts out fairly well. For the first 50 pages or so, one is drawn into what looks to be an interesting premise: a dead, naked curator stretched out on the floor of the Louvre with bizarre messages all about.

But with the introduction of the female protagonist Sophie Neveu, the mystery, as Archie Bunker once said of miniskirts, is over and the silly preaching commences. Both Robert Langdon and Sir Lee Teabing speak in the tweedy, pompous tones of condescending lecturers who are fond of issuing tut-tutting, moral pronouncements to their inferiors, confident that their overbearing manner will disguise any distortion of facts.

One such fact that is troubling for Brown and his characters is their assertion that the 4th Century Roman Emperor Constantine was responsible for assembling the Bible and the notion that Jesus Christ was divine. This certainly would have come as news to early Church fathers like St. Clement of Rome, the fourth pope, who wrote, circa 96 AD, “Let all the nations know that thou art the only God, that Jesus Christ is thy Son, that we are thy people, the sheep of thy pasture.” (1 Clem 59:4)

Also surprised would have been the thousands of Christians who went to their deaths both before and after the kind Pagan emperor collated the ideas for which they gave their lives. The word “martyr” is derived from the Greek word for “witness,” which in turn usually means testifying to the truth; which in this case is that the Church pre-dates the Bible, and even the Emperor Constantine.

Some folks are big fans of the term “oral history” when it comes to proving things like Thomas Jefferson sired children with his slave mistress. But try using it to explain to them that the Church — which started life as a handful of men in a lonely upper room in Jerusalem — flourished in just that way, and they look at you as if you are lying naked in the Vitruvian Man position.

Another ruse by Brown is “The Last Supper” gambit, a great visual tactic. But let us ignore Da Vinci’s tendency to portray the apostle John (and John the Baptist, see below), as did most other Renaissance painters, as a young, feminine-type figure, and assume instead that he is indeed Mary Magdalene. Where then is the “disciple whom Jesus loved, who had lain close to his breast at the supper?” (John 21:20) Maybe St. John, like St. Peter, was also “something of a sexist” and refused to dine alongside the sacred feminine.

So in the end, Brown’s book is all about sex and sexists; the former being the true religion of modernists and the latter the Catholic Church. Yet, after their initial revulsion at the book’s themes, Protestants must be amused by the contention that the Church is uniformly misogynistic; given their distaste for, and Brown’s omission of, the Catholic veneration of the Blessed Virgin Mary and other female saints for which countless churches and cathedrals are named.

The great Doctor of the Church, St. Augustine — himself converted by his mother from Manichaeism, a Gnostic offshoot — once said, “For my part, I should not believe the gospel except as moved by the authority of the Catholic Church.” (Against Manichaeism, 5.6)

Few devout persons of any religion contribute funds to the sludge pit that is Hollywood, but if this movie spurs Catholic and other Christian leaders to reinvigorate their teaching on the basics of their faith, then the truth will emerge, as clear and bright as that first Easter morning.

P.S. I’ll leave you with a curious and obscure inscription I happened to note suspiciously etched in the wood beneath a kneeler in my own parish church which you might decode: JEER, HISS! CRISIS NUTS! 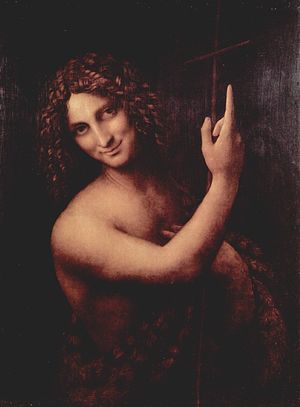