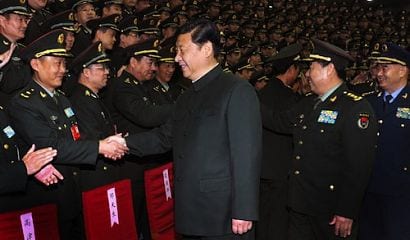 It had to be embarrassing for the new leader of a major global power to believe he had to stress his commitment to halt pervasive corruption in the political party he now leads. Nonetheless, that is exactly what was done by Xi Jinping, the presumptive president of the Peoples’ Republic of China (PRC) due to take office in March. Xi is not the usual Chinese leader. He is six foot tall, married to one of his country’s most famous singers, and has a daughter attending Harvard University. The “princeling” son of one of Chairman Mao’s confidantes who was later thrown in jail during the Cultural Revolution, Xi has worked his family’s way back up Beijing’s complicated political social ladder

Mr. Xi specifically criticized China’s Communist Party in his initial speech after the Party Congress last November. He left no question in the minds of his national television audience that the ten years of his presidency will be devoted to political reform aimed at improving the life of the individual citizen. While emphasizing in general terms the need to wipe out official corruption on all levels, Xi chose not to be specific regarding his program for improving such things as incomes, social services, and living conditions. This did not really matter because his promise to attack the criminality within the Party’s leadership was adequate to appeal to the everyday desires of the populace. It seemed logical to a nationalistic citizenry that “good things” would follow.

By placing a special emphasis on bribe-taking by government and party officials, Xi sent a signal to his law enforcement and judicial community that the days for a crackdown had arrived. As lavish gifts have been for years a standard of “friendship” with China’s ruling clique — including the Xi Jinping family — it is not clear to the expatriate and indigenous business community just what will replace this traditional method of recognizing status and authority.

The governmental problem of dealing with acts of corruption and favor is actually secondary to the lack of a sustainable countrywide economic growth model. Xi will have to direct his team’s attention to the massive spending on high profile infrastructure projects during this last year of Hu Juntao’s presidency. This heavy investment in major programs such as railway construction gave the appearance of positive economic activity, but it did not foster the needed increase in consumer spending. Indeed the large infrastructure expenditures acted to obscure the shortfall on the consumers’ side.

Economic reform will be the primary target for the next premier, Li Keqiang. As a PhD economist from Peking University, Li has the intellectual and political credibility necessary to do the job. The problem he faces is that while China has made great strides in building its welfare state, the ordinary citizen has not responded by putting his saved money back into the system through increased spending. In simple terms, the Chinese people as a whole are very protective of their hard-earned savings accounts and hesitate to shift to a more active consumerism. To quote the Financial Times, “The rising consensus among economists is that the export-oriented investment-led growth model that has sustained China for more than three decades is running out of steam and major reforms are needed for growth to continue.” That will be Li Keqiang’s job — and it’s immense.

The person on the new Standing Committee of the Politburo who will have the primary trouble-shooting responsibility in the field of corruption investigation is another “princeling,” Wang Qishan. He too is the son of a revolutionary comrade of Chairman Mao Zedong. More important, Wang is considered a specialist in financial matters and is expected to institute stock market and financial regulation that will do away with — or at least diminish — corruption at all levels of political leadership. The problem is that vulnerability to payoffs is increased by the low salaries of most officials. No one is immune to the colored envelopes received at state occasions. It will be Wang Qishan’s unenviable responsibility to put the brakes on this practice as well as the even more insidious distribution of new ventures’ shares to chosen relatives of key politicians.

Xi Jinping chaired the committee that provided the preceding president, Hu Jintao, with the posture statement on Chinese Armed Forces capability that Xi will now have to oversee. This definitive study subtly shifted China’s military strategy from its oft-publicized “defensive character” to an emphasis on mounting a force structure, as the report said, “commensurate with China’s international standing.” This theme underpins what in the next ten years is expected to become a Chinese military with a new air, space, and naval advanced capability.

Fixed wing technological advances will compete for priority with missile development. Carrier battle group formation is aimed at altering the so far limited defense nature of Chinese naval assets constructed to repel theoretical invaders. Altering the strength and structure of the Chinese navy is symptomatic of building a modern and powerful military capable of operating at a distance no less than the U.S. Pacific Fleet. This is all consistent with Beijing’s concept of acting accordingly to its “international standing.”

In defense matters Xi Jinping is in charge of building a nation far different from what it has been in the past. The new president is well known to have a special interest in and relationship with the Peoples’ Liberation Army (PLA). Beijing now has its own version of a foreign affairs and defense pivot that calls for a strategic buildup just when Washington appears to be moving toward a reduction in its force projection capability.

Xi Jinping and China will have a busy next ten years. Both are very ambitious.