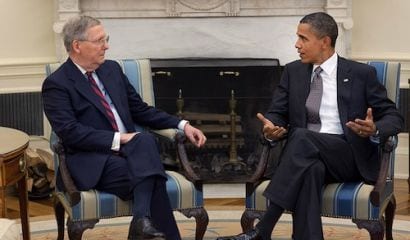 The New Year’s Eve deal to avoid the fiscal cliff isn’t just a lousy deal: it’s entirely corrupt. Obama insisted on what he called a “balanced deal,” but to him a balance is only between increased government spending and higher taxes. It allowed President Obama to pretend that the deal reduces federal spending by $732 billion over the next ten years though, in fact, it increases federal spending — by $332 billion — more than it cuts.

And it did precisely nothing about federal spending. In fact, it adds $4 trillion in new debt over the next decade.

The fiscal cliff deal was nothing more than a bridge from one cliff to another. If we’d gone over that cliff, the damage done could have been remedied quickly. None of the tax hikes the so-called “fiscal cliff” would have imposed would have been permanent. They could have been reduced to their pre-cliff levels by the legislation that is now going to be another “must-pass” deal on the federal debt ceiling mess next month.

And now — with the eager help of the media — the next cliff is far higher than the last one. The New Year’s Eve deal only delayed by two months the sequestration cuts that will gut the Pentagon. Obama’s leverage on the sequestration is retained. Add to that Obama’s setup up of Joe Biden’s gun control task force to report in the midst of the next debt ceiling crisis and you have a higher cliff than the last one.

Sen. Dianne Feinstein (D-Cal) has delayed the introduction of her gun control bill to await the broader, more aggressive proposals that Biden produces. She and Obama will couple the gun control bill and the debt ceiling “crises” so that regardless of whether it’s one massive bill or two — raising the debt ceiling and imposing a national gun control regime — it will pass the Senate and be laid on the steps of the House in one big lump, at the last moment.

Obama has indicated that he wants more tax hikes. Yesterday, Sen. McConnell made the rounds of the Sunday talk shows and again rejected the idea of more tax hikes. He told ABC’s George Stephanopoulos, “The tax issue is finished, over, completed.” McConnell added, “That’s behind us. Now the question is what are we going to do about the biggest problem confronting our country and our future, and that’s our spending addiction.”

But it’s not over until Obama has been defeated on it, and so far he hasn’t been.

Obama will — again — push the new “crisis” to the brink. Obama has learned that he can win by waiting until the very last moment because the Republicans will give him what he wants rather than take the blame for what he calls their failure. Obama and Treasury Secretary Geithner will be demanding that Republicans act and telling the world that the Republicans are risking a downgrade in our international credit and threatening a government shutdown.

Republicans will be left to defend their demand for spending cuts in return for a debt ceiling hike against a tidal wave of pressure from the media and Obama’s unified liberal congressional base. And they will have to do that at the same time they’re opposing the Obama-Feinstein demand for gun controls.

The February debate will be another masterful exercise of brinksmanship by Obama. Unless Republicans are willing to shut down the government and risk another downgrade to our credit rating, they will lose again.

Obama keeps winning because he’s willing to take political risks that Republicans won’t. Obama refused deal after deal on the fiscal cliff and held out right up to the moment we’d fall off the cliff. House Republicans — the 151 of them who voted against the New Year’s Eve deal — were brave enough to refuse any deal that didn’t cut spending. But Senate Minority Leader McConnell didn’t just cave in, he engineered the deal with Joe Biden, leaving House Republicans with the choice between accepting the whole blame for a middle-class tax hike or going along with McConnell’s deal.

The political map has changed since the New Year’s Eve fiscal cliff deal. Boehner, just re-elected Speaker, has to listen to the 151 conservatives who voted against “Plan B” in order to pass any deal on the debt ceiling. Boehner no longer has the power to cut more secret deals with the White House. McConnell, too, has less of a free hand because of the new, vocal conservative members in his caucus such as Texas’s Ted Cruz. To McConnell’s credit, on the Sunday shows he didn’t rule out shutting down the government if Obama won’t go along with spending cuts.

Republicans haven’t faced the fact that the fiscal and gun control fights are ideological battles. Conservative principles of smaller government, fiscal responsibility, and Second Amendment rights are being surrendered to liberal ideals which are the precise opposites.

Obama will demand the debt ceiling hike — and more taxes and DiFi’s gun control bill — and use sequestration of Pentagon spending as leverage. If there’s no deal on the debt ceiling, sequestration will be imposed automatically. Obama has no incentive to stop sequestration, reform the entitlement programs, or avoid a government shutdown because the public is ready to blame Republicans for any failure to reach a compromise.

Republicans have done a dismal job of trying to shift the blame Obama for his failure to address the spending problem. To Obama, a “balanced approach” requires that federal spending increase while taxes rise. That’s what the New Year’s Eve deal did. Republicans can’t allow that to happen again.

It’s become fashionable to quote Margaret Thatcher’s words that first you win the argument, then you win the election. To do that, Republicans have to make this an ideological fight. That’s doubly hard for them because their ideology has been muddled and diffused for almost a decade.

That’s not to say that it isn’t recoverable. The recovery may have begun yesterday with Sen. McConnell’s insistence that more tax hikes are ruled out. But he, and the rest of the congressional Republicans, not only have to stick with that, they have to do a lot more.

McConnell — despite the lousy New Year’s Eve deal — is still the strongest conservative among the congressional Republicans. Others — potential leaders — have to join with him and with Republican governors to campaign for the next several months on the real fiscal crisis which is government overspending. They need to campaign relentlessly, getting Republican governors such as Indiana’s Mike Pence, Louisiana’s Bobby Jindal and Virginia’s Bob McDonnell to join them in a media onslaught painting Obama as dangerous for our economy and our future.

And, if they can walk and chew gum at the same time, Republicans have to get ahead of Obama and Feinstein on gun control with their own ideas. There’s a lot to be done to improve school safety — principally to get the dangerous mentally ill off the streets — that will be vastly more effective than gun control.

It will be a tough campaign. And a campaign it is, just like the ones Republicans lost in 2008, won in 2010, and lost in 2012. They need to take it to the brink on the debt ceiling, absorb a government shutdown, and defeat gun control if they are to regain any advantage in Obama’s second term. If they don’t win this one, it will be their last stand. They will deserve to remain in the political wilderness for a very long time.