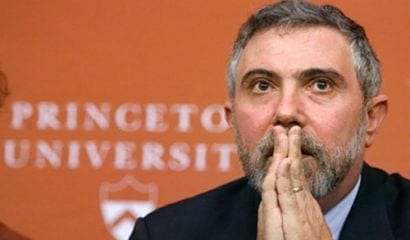 I join Hollywood actor Danny Glover in urging the president to appoint a truly robust progressive — the New York Times columnist and former economist Paul Krugman — as the next U.S. Treasury Secretary. Nothing would do more to cement the confederacy of dunces that the president is gathering around him as his second-term cabinet.

In an April 24, 2012 New York Times blog post one wag titled “Why I Don’t Write About Israel,” Krugman, who is Jewish, played the part of Pontius Pilate in publicly washing his hands of any sense of personal responsibility, or any real remorse, for the calamity that will surely follow for the Israeli people if Iran or Hamas succeed in getting their hands on nuclear weapons. This is how the professional gadfly and author of The Conscience of a Liberal explains his craven and disingenuous silence on Israel/Palestine:

The truth is that like many liberal American Jews — and most American Jews are still liberal — I basically avoid thinking about where Israel is going. It seems obvious from here that the narrow-minded policies of current government are basically a gradual, long-run form of national suicide — and that’s bad for Jews everywhere, not to mention the world. But I have other battles to fight, and to say anything to that effect is to bring yourself under intense attack from organized groups that try to make any criticism of Israeli policies tantamount to anti-Semitism.

In other words, Krugman worries a lot about the so-called Jewish lobby. He’s one of those people.

So, too, of course, is Chuck Hagel, the nominee for U.S. Secretary of Defense, who, as it happens, is not Jewish. The former Republican senator from Nebraska has a long record of hostility toward Israel — once boasting that, unlike his peers, he wasn’t intimidated by “the Jewish lobby.” Hagel has urged President Obama to open direct negotiations with Hamas and, in 2007, he voted against identifying the Iranian Revolutionary Guards Corps as a terrorist group. While still a senator, he decried any use of military force against Iran to keep the country from developing nuclear weapons.

No doubt Krugman and Hagel — joined by John Kerry as secretary of state and Barack Obama as commander in chief — would work well together in putting screws on Israel to adopt “less narrow-minded policies” … in making more and more concessions to an enemy (Hamas) that will never accept anything less than the absolute destruction of the Israeli state. While favoring almost every other kind of government handout, this all-star team of mollifiers and appeasers would undoubtedly do its best to hold financial and military aid to Israel to the absolute minimum needed to assure that well over 60 percent of the Jewish vote will continue to go to the ruling Democrats (regardless of any concerns within the vaunted “Jewish lobby” about Israel’s security).

They will also do their best to buy time for Mahmoud Ahmadinejad and the other crazies running the show in Iran so that they can continue to pursue the means of destroying Israel in a single strike without fear of U.S. military intervention.

But Obama doesn’t really need Krugman’s help to sell out America’s only real ally in the Middle East.

Krugman’s real value to Obama would be in the economic sphere. There is no bigger cheerleader for increased government spending and increased public debt than the delusional and pop-eyed Princeton professor. Krugman thought that the original “Stimulus” bill, which was passed in 2009 and sent more than $800 billion of taxpayer money down the drain in an assortment of hastily arranged, poorly administrated, and wasteful ventures, was too small by half.

In “The Education of John Boehner,” the lead op-ed in Monday’s Wall Street Journal cited yesterday by Jeff Lord, Stephen Moore began with the observation:

What stunned House Speaker John Boehner more than anything else during his prolonged closed-door budget negotiations with Barack Obama was this revelation: “At one point several weeks ago,” Mr. Boehner says, “The president said to me, ‘We don’t have a spending problem.’”

That is what Krugman always says. Wherever he goes, he campaigns ceaselessly against government austerity — as if government aggrandizement has ever contributed to the spread of human happiness or prosperity. He believes that the “little fairies” that may be conjured up by greater borrowing and public spending are the “little fairies” that put bread on the table for you, me, and other workers and business owners.

But it seems unlikely that the president will look favorably on Danny Glover’s — or my — petition to bring Krugman into his cabinet. And I really don’t give a damn. I believe that the only way to deal with this fatally flawed government is to oppose it at almost every turn.