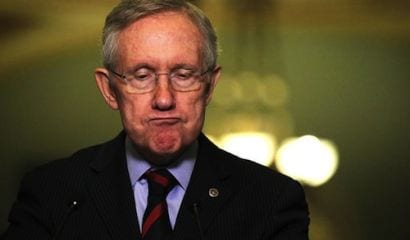 WASHINGTON—I have one question about the way Majority Leader Harry Reid has been conducting the Senate. Has he committed a felony or a mere misdemeanor?

The wags will say that a politician from Nevada does not commit misdemeanors, but I am in earnest. The difference between whether Dingy Harry—as he is known by the eminent political scientist Dr. Rush Limbaugh—shuffles off to a federal prison or merely pays a hefty fine is significant. I suppose we can leave it to the federal prosecutors to decide, but if he gets off on a misdemeanor I urge it also entail mandatory budget counseling. No one would be surprised to hear of Harry being sentenced to a stint at anger management counseling. Why not mandatory budget counseling too?

Majority Leader Harry’s transgression is that for over 1300 days he has failed to pass a budget. In fact, there is no evidence he has even tried. This is against the law. Federal law clearly requires the Congress to pass a budget every year. I presume the reasoning behind this is that the American people deserve to know what their taxes are paying for, or another way of putting it is, why are the American people being mulcted every year by the Internal Revenue Service to pay for Harry and his gang’s criminal activities? What are their activities? Are they buying votes with public moneys? Are they favoring friends with subsidies and other extensions of the people’s treasure? What about lucre they have extended for “renewable energy,” for automobiles no one wants, for every idiot enthusiasm of the so-called welfare state.

For over 1300 days Harry has been operating his scam without a budget. The House of Representatives has passed budgets in accordance with the law. They have been designed by the law-abiding chairman of the House Budget Committee, Paul Ryan. He has braved obloquy from Democrats and other ideologues for putting down on paper what he would spend federal money on and where the citizenry’s taxes are going. Harry has not, and according to the law he ought to go to jail or be otherwise punished. Surely we do not make laws without punishments, do we?

Not all senators are complicit in Harry’s intrigues. For instance, the affable Senator Jeff Sessions of Alabama is blameless and actually indignant with his colleagues and with Harry in particular. Recently he told my colleague at the Washington Examiner Byron York, “I think it should be a firm principle that we should not raise the debt ceiling until we have a plan on how the new borrowed money will be spent. If the government wants to borrow money so it can spend more, then the government ought to tell the Congress and the American people how they will spend it.” York concludes, “One problem, of course, is that the law already requires Congress to pass a budget, and Reid has violated that.” I say prosecute him. This is malfeasance on a vast scale.

Whether Harry goes to the can or accepts a lesser sentence, as I have suggested, a mandatory course in budget management, we are going to have to face up to these trillion dollar deficits that the government has been piling up since our smug President took over, Barack Obama. He envisages them for years to come, though obviously if those trillion-dollar deficits do come life in the great Republic will be very different from what it has been. We have already raised taxes on his hellish two percent, now Republicans have got to insist that President Obama make good on the other half of his deal and cut spending. The way to cut the trillion-dollar deficit is now through budget cuts. The federal government spends too much. It spends money it does not have. In the coming debt-ceiling fight Republicans and the handful of sober Democrats out there should offer suggestions on where the cuts should be.

I have just read a study by the increasingly mainstream Heritage Foundation outlining $150 billion dollars of cuts in the budget. Patrick Louis Knudsen, the author of the study, points out that many of the cuts are perfectly doable, for they envision the federal government’s desisting from undertaking what it should never have undertaken in the first place. Other cuts involve privatization, policy consolidation, ending ineffective programs, and eliminating waste, fraud, and abuse. For instance, Knudsen’s plan calls for cutting $13.5 billion from the Department of Agriculture, $3.5 billion from Community Development, $15.1 billion from Health Care, and $15.8 billion from the Department of Transportation. So it goes through every nook and cranny of the federal government, save the Department of Defense. Knudsen does not cut from the Pentagon because he feels that the military is an essential area of government involvement. Presumably he leaves it to the generals and admirals to decide what is essential for the security of the country.

The coming battle over the debt ceiling is the right time to demand our government get its fiscal house in order. If not now, when? As for Dingy Harry, possibly under the threat of prosecution he will smarten up. No one wants to see him go off to the calaboose.