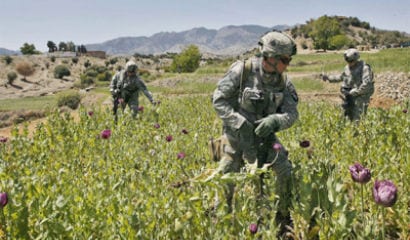 President Obama and Afghan President Hamid Karzai will meet later this week to discuss the terms of American withdrawal from the twelve-year long war in Afghanistan. Obama is moving forward with his scheduled removal of U.S. forces from Afghanistan by the end of 2014.

The American commander in Afghanistan, Gen. John Allen, reportedly wanted to keep the more than 60,000 U.S. troops in country through this year’s fighting season. Nevertheless, the White House is going ahead with a withdrawal schedule that will reduce the force this summer and to leave only about 25,000-30,000 troops there by spring of next year, and as few as 3,000-4,000 by the end of next year.

That’s too much and too fast for the neocons. They who devised the “nation-building” strategy — and its military implementation, “counterinsurgency” — are rebelling against the idea.

In a Wednesday Wall Street Journal piece, two top neocons — Frederick and Kimberly Kagan — argue that we have to leave substantial forces in Afghanistan indefinitely or we will have wasted a decade of war. The Kagans were close advisers to Gen. David Petraeus when he was the commander in Afghanistan. They believe we need to recommit ourselves to the “counterinsurgency” strategy that has already failed.

The Kagans define success in Afghanistan as driving al Qaeda from the nation and preventing its return. They point out correctly that the “global al Qaeda movement” is headquartered in the Afghanistan-Pakistan border region and is home to the largest concentration of regional and global Islamist terrorist organizations in the world.

From this, they conclude that we can’t withdraw from Afghanistan lest we allow al Qaeda’s return. They believe the Afghanis won’t allow the Taliban to return to power. What nonsense. The Taliban will re-impose its rule easily by force and al Qaeda will be with them when they do. The Kagans admit that the counterinsurgency’s goal was not to build Afghan forces so that they could function without our help. In essence, that is an admission that counterinsurgency requires us to fight forever in Afghanistan without doing what is necessary to truly defeat our enemies be they al Qaeda, the Taliban, or the Pakistanis. As long as Pakistan supports the Taliban and al Qaeda, they will fight on.

Galula didn’t live to see us ignore his theory and strategy in Vietnam, Iraq, and Afghanistan. In Afghanistan, a huge nation with tribally divided population, there was never the prospect of having enough U.S. troops there to provide local security. Hundreds of thousands could be sent and wouldn’t be enough.

What cause does the U.S.-Afghan counterinsurgency offer that could possibly be more attractive to the Afghan population than the pure Islamism which al Qaeda and the Taliban — with the dedicated assistance of Pakistan — promise? None whatever. Islamism is so deeply embedded in Afghan society that nothing can be more attractive to the tribal leaders and their peoples. Our nation-building/counterinsurgency strategy never dealt with these hard truths. The neocons conned George Bush, David Petraeus, and Barack Obama, who merely compounded Bush’s mistakes.

The neocon commitment to their nation-building con job seeks an endless commitment of American troops and funding. They argue that if we withdraw now, the Afghan forces would be “immobilized on its bases and unwilling to patrol.” As Bing West proves in his book, The Wrong War, that is the case now even with American troops joining the Afghans in too many fruitless missions. When we leave, the Afghan forces will melt back into the population, fading quickly at the first sign of a Taliban offensive. Those who don’t abandon the fight altogether will join with the Taliban and fight for their return to power.

The neocons say that Pakistan doesn’t govern its tribal areas to their liking. But Pakistan’s view of success in Afghanistan is very different from theirs, and in it Pakistan is succeeding. Pakistan’s support for al Qaeda and the Taliban is notorious and dedicated. To expect Pakistan to do otherwise is ignorant and other-worldly. If we wanted to defeat al Qaeda and the Taliban, and prevent their return to Afghanistan, we would have had to compel Pakistan to change its Islamist view of the world. That is beyond our power to do, so the neocons have just ignored that fact.

We have been defeated in Afghanistan by Islamism, by our misapprehension of the theory of counterinsurgency warfare, and by Pakistan’s Islamist commitment to al Qaeda and the Taliban.

We can stay in Afghanistan for another year or another century. But nothing in the nation-building-cum-counterinsurgency strategy will change the facts that dominate Afghanistan and its neighbors Pakistan and Iran. And no matter how long we stay, no matter how many American lives are sacrificed while they tinker with the flavor of their secret sauce for counterinsurgency, it will end as it is ending now, in failure.

Obama is right in pulling our forces out of Afghanistan. The slow pace of withdrawal is timed politically, to delay the public consequences beyond 2016, but in that calculation he may not succeed. We have accomplished nothing that will last much past our withdrawal, whether it comes next year or some time later. The only question is what we do afterward?

None of Obama’s foreign policy team — Chuck Hagel as Defense Secretary, John Brennan as Director of Central Intelligence, and John Kerry as Secretary of State — will want to take any action to prevent the resurgence of Afghanistan-based terrorism. They won’t want to act decisively to prevent Iran from achieving nuclear weapons. And, most of all, they don’t want to defeat the global threat of Islamism.

As former Defense Secretary Donald Rumsfeld is fond of saying, weakness is provocative. Nation-building is the biggest mistake we have made since 9/11. Because of it, we are much weakened and our enemies are stronger.