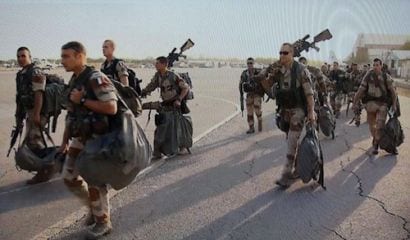 The rescue of Konna by the French army’s 11th Airlift brigade over the weekend had all the drama and gallantry that we have come to expect of our own forces as they battle savage tribesmen in the wilds of Afghanistan’s remote regions and Pakistan’s northwest. The timing was breath-taking; a delay of just a few hours and the Islamist onslaught on southern Mali might have become irreversible: fresh, well-equipped and highly motivated jihadist troops would have taken Bamako and presented the Malians — and us and the French — with a stark choice: make a deal or fight us in a densely populated city where most of the victims will be the populations you are trying to rescue.

It did not happen that way — so far — because the Ansar Dine men led by the feared veteran Tuareg jihadist and bandit Iyad Ag Ghali paused in Konna, a small town on the Niger about a hundred miles south of Timbuktu, instead of racing on to the Mopti-Sevare junction. It may have been that the French heli-borne troops cut them off at the pass — we will find out eventually; at any rate the 11th knew they had to hold Sevare, because there is an airstrip there and you need an airstrip if you are going to go after the long-distance raid specialists who make up the bulk of Ansar Dine’s force.

The French were able to move as fast as they did because, first of all, they obviously are good at this, but also because they were getting ready for exactly this sort of operation. They expected to be the ones who would be on the offensive, doing what they did in Konna in Gao or Timbuktu, important cities of the north that fell to the combined Tuareg and jihadist forces that conquered northern Mali — a territory the size of France — last April after a three-month rout of the Malian army.

Ansar Dine jumped the gun on them, probably out of a combination of several reasons. There was a tactical urgency: they could see the French build-up, on both the military and diplomatic fronts. Since September, Paris has put together a coalition of the willing, a difficult feat in a region characterized by ancient tribal hatreds — the word is not too strong — and mutually suspicious post-colonial regimes. At the same time, French army advisors based in Burkina Faso, the Ivory Coast, and elsewhere in the Sahel region have been making battle plans and getting their equipment ready.

The idea, for which the Hollande government sought and received UN Security Council approval in late December, was to raise a three thousand-strong multinational army with French advisors in order to liberate northern Mali. It would be done with the full cooperation of the Mali government, and the Malian army, or what remains of it, would be a full participant in the campaign. It is this plan which Iyad Ag Ghali evidently tried to pre-empt.

A second urgency was caused by the shifting political situation in the region. The Mali civil war began as a secessionist movement among non-jihadist Tuareg, and although these were routed by Ag Ghali and his AQIM (al Qaeda in the Islamic Maghreb) allies, an international force whose core is composed of veterans of the Algerian civil war of the 1990s, they remain a factor in the war over Mali. They also receive some consideration from the Mauritanians: these are determined to wipe out al Qaeda, but they are not averse to backing MNLA, i.e. secular Tuareg, claims to some sort of autonomy.

The Mauritanian leadership believes, at any rate, that the problem of northern Mali must include a program for helping the long-neglected Tuareg populations. Apart from a certain affinity for another nomadic, desert people, the Moors — the dominant group among the Mauritanians — have learned there cannot be peace on their eastern frontier if the “Tuareg Question” is not resolved.

The French toyed with the idea of creating a Tuareg state at the time of decolonization, but it went nowhere. They had other problems, particularly the painful withdrawal from Algeria, and they did not want to quarrel with the leaders of the new sub-Saharan nations, including Mali. These were black-power men for the most part — “Africa for the Africans” was the slogan of the hour. They and the “whites” of the Maghreb — Arabs, Moors, Berbers — did not like one another. They still do not.

This is evident in the reaction of the MNLA to the French intervention. Although they are on the sidelines, they continue to issue communiqués and make appearances at the various venues of mediation that have been tried in Algiers and Ouagadougou (Burkina Faso). Their position is that the French should be applauded for attacking the Islamists, but they must do it not on behalf of the failed Malian state, but for the benefit of the indigenous populations of what they call the Azawad.

Surely this view has some merit, but it neglects several realities. The Tuareg are not the only native residents of the Azawad — there are also Moors and, more ominously, the Songhai. Songhai and Tuareg regard each other with a contempt from which racism is rarely absent.

The complexities of the Sahel render a political solution problematic, which in turn means a military solution can only be partial and temporary. This is surely why Dominique de Villepin criticized the French intervention over the weekend. It seems a little gross for a former foreign minister to attack his own country’s government in time of war, but he maintains he is only being consistent with the stance he took in 2003 when he voted against the U.S. intervention in Iraq at the UN (after telling Colin Powell he would support us). His thesis is that you cannot go to war if there is no political interlocutor with whom, afterwards, you know you can make peace.

Regardless of our own feelings about Villepin (and his feelings toward us), his point may be worth pondering. Not that there is a credible alternative to what the French army is so gallantly doing, short of allowing a major breakthrough by the Islamist internationale into the very heart of Africa, with all the consequences that will have. But there is an urgent need for our own policy-makers to think hard about the choices, often unpleasant, that need to be made in the kind of long-term contest that we are engaged in.

Mr. Kaplan just returned from a trip to Mauritania.