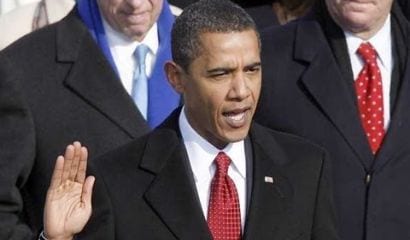 President Obama was inaugurated for his second term yesterday, and at the public ceremony today he’ll deliver a speech that will, at the height of his political power, set forth his agenda in terms of compromise and economic recovery. He’ll begin by claiming that his leadership overcame the greatest economic crisis we’ve faced since the Depression and he’ll go on to claim credit for achieving great “reforms” like Obamacare and “saving” the auto industry.

He’ll say that his great successes gave him a mandate to complete his agenda for jobs, for reviving the economy and all the things he didn’t get done in his first term. He’ll say that we need more “reforms” and that our economic salvation cannot be achieved by burdening the middle class and the elderly with changes to the entitlement programs that are rapidly destroying our economic future. And he will try to repaint himself with the worn-through veneer of “post-partisanship,” challenging those who oppose him to compromise. If they’ll only be as reasonable as he, the president will assure us, we can get over the partisan gridlock that Americans are tired of seeing.

Obama will wrap some soft words around his agenda for comprehensive “immigration reform,” gun control, and more investments in “green energy” (the nonsense that brought us Solyndra) to make us energy independent. He will lay claim to fiscal responsibility despite his tidal wave of spending and will explain, in broad terms, how more spending will magically bring down the federal debt.

Obama will claim credit for ending the wars in Iraq and Afghanistan and by so doing making America more popular, powerful, and influential in the world. He will claim that our military is stronger and more capable without mentioning the cutbacks he’s already made and those in the pipeline.

But all of that will be aimed at achieving his overriding objective: to conceal his comprehensively confrontational approach to everything political. Obama’s strategy of confrontation, made clear since he stampeded Congress into passing his 2009 “stimulus,” has been his choice for the simple reason that it works. On every occasion in which they could possibly have won a real showdown, Republicans have retreated. In the last press conference of his first term, Obama faced down the Republican demand for spending cuts, saying “Republicans in Congress have two choices here: They can act responsibly, and pay America’s bills, or they can act irresponsibly, and put America through another economic crisis,” he said. “But they will not collect a ransom in exchange for not crashing the American economy.”

He won that round, and is about to win the next. House Republicans are about to pass another debt ceiling hike — meant to carry the government for the next ninety days — postponing again the devastating sequestration of spending that will gut the Pentagon. They are demanding the Senate pass a budget by then on pain of stopping payment of congressional salaries if it doesn’t. The Senate hasn’t passed a budget for four years, and they’re not about to do so now on pain of that threat because the Republicans driving the House clown car apparently don’t know that the 27th Amendment bars any change in congressional pay without an intervening election.

Obama is far more adept. He’s turning his presidential campaign machine into a machine that will campaign for four years to sell his second term agenda directly to the American people with the eager assistance of the media. He said he wants “…new jobs, new opportunity and more security for the middle class.” There’s nothing in his agenda that will allow any reduction in federal spending. There will be no compromise on Social Security, Medicare, and Medicaid, the entitlement programs that are driving federal spending. There will only be demands to increase “investments” to spend more, taking money out of private hands, and thereby ensuring the economy won’t grow.

David Plouffe, Obama’s chief political advisor, tipped the coming confrontation on the debt ceiling on yesterday’s talk shows. Congress has to raise the ceiling by mid-March or the government will run out of authority to borrow. Obama needs the debt ceiling hike, but won’t allow it to be a vehicle for spending cuts. Asked by George Stephanopoulos if spending cuts would be allowed without more tax hikes, Plouffe said no: “It’s got to be balanced,” Plouffe said, meaning that more tax hikes are on the agenda despite the statements of House Speaker John Boehner and Senate Minority Leader McConnell that tax hikes are off the table.

Obama’s problem, at least for the moment, is that a lot of Senate Democrats aren’t rushing to support his biggest “crisis” issue, which is gun control. Having announced an aggressive agenda to ban “assault weapons” and large-capacity magazines, Obama faces nine Senate Dems (and “independent” Maine Sen. Angus King, who lines up with the Democrats) who are not lining up to support the ban. Even Majority Leader Harry Reid is among them urging caution. From that, too many opponents of gun control, including the NRA, are sitting on their hands.

But Democrats’ opposition may not last and gun control opponents should not be taking it for granted. Reid may bring about a change to Senate rules that would backfire on them. Reid is planning to change Senate rules to prevent Republicans from blocking bills by the filibuster, which would render Senate Republicans powerless to prevent Obama passing anything he wants (other than treaties, which require a two-thirds vote). With a change in rules, Obama may be able to bring enough pressure on Senate Dems to pass the assault weapons ban.

In his speech today Obama will try to frame this year’s political agenda around his big ticket items. He will say that his work isn’t done, and that those who stand in his way need to bend, to compromise, and cooperate with him. But his words will be soft, his claims to reasonableness specific, and his willingness to compromise stated in broad, vague terms. He’s saving his harsh words and demands, waiting a few weeks until his State of the Union speech to be his confrontational self.

That’s the context in which we need to listen to his speech today. When Obama’s next State of the Union speech is given, we’ll hear no soft words.

Obama’s confrontational approach is aimed at making congressional Republicans irrelevant. Their only remaining power is to choose some ground to stand on and refuse to surrender again in a real crisis, not one Obama has created. If they choose to refuse a debt ceiling hike without real spending cuts, the government may be shut down for days or even weeks. But they can only force Obama to compromise if they stand firm. If they don’t, they will be irrelevant for the next four years. And deservedly so.