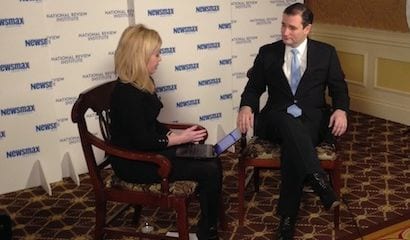 No fistfights broke out during the National Review Institute’s “Future of Conservatism” Summit in D.C., disappointing my hopes for the weekend. Some sort of bloodletting — at the very least, a venting of grievances — might do everybody good after the Republican defeat in November. Alas, decorum prevailed and none of the panelists even raised their voices in anger.

The most depressing moment of the conference came, perhaps not coincidentally, during a panel on immigration when radio talk-show host Hugh Hewitt, representing the pro-amnesty side of the argument, announced that he really didn’t want to be debating immigration because it was bad for Republicans to talk about the issue — especially when those talking about it were middle-aged white guys like himself and his antagonist, Mark Krikorian of the Center for Immigration Studies.

Undeterred by Hewitt’s disavowal, Krikorian recounted facts that ought to give pause to conservatives who, since November, have begun jabbering desperately about winning over Hispanic voters by adopting a pro-amnesty line. Krikorian noted a Pew Research poll from 2011 that found Hispanics have the lowest opinion of capitalism of any group surveyed. Only 32 percent of Hispanics hold a favorable view of capitalism, while 55 percent have a negative view. Even supporters of the left-wing Occupy Wall Street movement expressed a more favorable view of capitalism than did Hispanics. Insofar as the Republican Party promotes policies favorable to capitalism, then, it is at odds with the sentiments of the one group whom the pro-amnesty Republicans insist their policy ideas will win over to the GOP.

Facts are stubborn things, John Adams once observed, but perhaps even more stubborn is the sense of panic that has gripped Republicans since Obama’s re-election. No sooner had the votes been counted than shell-shocked Republicans began making a lot of earnest noise about “demographics” and “culture.” These seem to be code words of a kind. When a Republican says “demographics,” he means, “Brown people don’t like us very much,” and “culture” is Republican code-speak for, “Young people really hate us, don’t they?”

This nervous code-talk was evidently inspired by exit polls showing that Mitt Romney got just 27 percent of the Hispanic vote (by comparison, George W. Bush got 44 percent in 2004), and 37 percent of under-30 voters (compared to Bush’s 45 percent in 2004). The GOP panic reaction to those numbers has been wildly disproportionate. Hispanic voters comprised just 10 percent of the electorate, according to the exit polls, and 81 percent of voters were over 30, but the Republican demoralization since November has been so complete that they can’t seem to stop obsessing over “demographics” and “culture.”

Have we seen this kind of reaction before? Yes and, not long ago, it was Democrats who were in panic mode. Most Republicans seem to have forgotten the doom reaction that briefly gripped Democrats after Bush’s 2004 re-election, when exit polls showed “values voters” to be the decisive factor in Ohio and other key swing states. “Values voters,” it seemed, associated Democrats with left-wing attitudes including radical anti-military sentiments, support for abortion and gay-rights activism. Even while the few remaining moderate Democrats were wringing their hands over these exit-poll numbers, however, the left-wingers determined to double down on these very issues. Enraged progressives made opposition to Bush’s war policies a litmus test and, in the 2006 primaries, drove Connecticut Sen. Joe Lieberman — who had been the Democrats’ vice-presidential candidate in 2000 — out of the party altogether. In 2008, the left-wing Democrats insisted on nominating the anti-war Barack Obama instead of Hillary Clinton (who had voted for “Bush’s war” in Iraq), and Obama has loyally promoted every single one of the radical issues that the “value voters” of 2004 rejected. If there are Democrats today who don’t enthusiastically endorse same-sex marriage and abortion on demand, they’re awfully quiet about it, and the fanatical extremism of the Left has apparently intimidated even conservative Republicans, who are now increasingly fearful of being identified with “social issues.” (Thank you, Todd Akin!)

This phenomenal fear of “social issues” is remarkable, given the fact that (a) polls indicate that opposition to abortion is at or near its highest levels since the 1973 Roe v. Wade decision, and (b) Gallup’s survey last fall found that homosexuals are a mere 3.4 percent of the U.S. population. Exactly why this 3.4 percent tail should wag the 96.6 percent dog — so that “marriage equality” has suddenly become a winning political issue in Maryland and other states — is a question that Republicans show no willingness to answer. If approval of sodomy is not yet legally mandatory, opposition to homosexuality is rapidly becoming an idea “that it is unacceptable to articulate,” as Maggie Gallagher said during a Sunday morning panel devoted to the issue of marriage. Traditional Judeo-Christian morality is currently in an “existential fight,” Gallagher told the summit audience, because such values are “being re-defined as the moral equivalent of racism.” No one on the panel made note of the remarkable political ju-jitsu performed by the radical Left, which seems to have turned a Republican asset — the very issues that motivated the “values voters” who inspired the Democrat panic of 2004 — into an embarrassing liability for the GOP in the short span of eight years.

Much of the discussion at the weekend summit was hopeful, if not exactly encouraging. Some of the more promising fresh faces of the Republican Party, including Texas Sen. Ted Cruz and Louisiana Gov. Bobby Jindal, offered strong arguments on behalf of the GOP’s continued relevance. The party’s 2012 vice-presidential candidate, Wisconsin Rep. Paul Ryan, warned the conservative audience Saturday that Republicans can’t afford to “get rattled” in their political battles with Obama during the next four years: “We have to be smart. We have to show prudence.”

As if on cue, the least prudent Republican in America made news Sunday by declaring his unabashed support for Obama’s proposal to provide amnesty to an estimated 11 million illegal immigrants. There is a “new appreciation… that we have to enact comprehensive immigration reform,” Arizona Sen. John McCain said on ABC, insisting that this “comprehensive” reform must include a “pathway to citizenship” for these law-breaking foreigners.

Is this “prudence” or panic? Are Republicans prepared to surrender and call it a victory? And is it the job of conservative spokesmen — including the intellectual heirs of Bill Buckley at National Review — to persuade us that the best way to beat liberals is to start agreeing with them? For the past two months I’ve been trying to shake the gloomy thought that we are, as I said after the election, doomed beyond all hope of redemption. But we are most certainly doomed to defeat if our leaders refuse to fight.