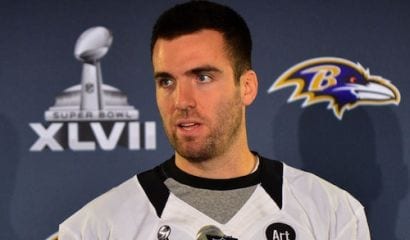 As we await Sunday’s Super Bowl, we should be grateful America’s football does not follow its politics. Comparing their prevailing trends clearly explains their standing in the public’s opinion. It also explains why they are producing such different results.

The dichotomy could not be greater between America’s favorite sporting event, the Super Bowl, and its politics’ growing prevalence, class warfare. We find the celebration of excellence juxtaposed to the politics of envy.

If professional football has “one-percenters,” the Super Bowl is where they live. Where is Occupy Wall Street? Where is the outrage? If our national politics were foisted onto our national obsession, these teams, which so disproportionately benefitted from the current system, would be forced to give back a large share of their “excessive” wins to the Commissioner — and feel guilty about it in the process.

The very existence of a gap between teams — those making and those missing the playoffs — would be cause for concern. The question would certainly arise whether this gap was growing. Teams coming up short in the regular season would have their envy stoked by accusations that Super Bowl teams had benefitted unfairly from a rigged system.

Would not such actions promote “fairness”? Why should a handful of playoff teams be further rewarded because they won a disproportionate share of games? Why would redistributing some of those wins to other teams not be a good idea? Would it not be better if all the teams were 8-8 and everyone made the playoffs?

Taking off our national political hat and putting on our national football helmet, such sentiments seem absurd. They fundamentally violate the essence of football. The very reason we watch is to see a system in which teams are striving to be the best, not entitled to be mediocre.

But there is a bigger and far more important reason why applying politics’ growing trend to our football would be misguided: It would be bad for football itself. Teams having wins stripped away would stop striving, since they were going to be taken from them. Teams having wins given to them would do likewise, since they would get wins anyway. Quickly, football itself would deteriorate.

Nobel economist Friedrich Hayek made the same points over 50 years ago in The Constitution of Liberty. Writing about nations and the premise of wealth redistribution between them, he observed: “But most of the gains of the few do, in the course of time, become available to the rest. If we abandoned progress, we should also have to abandon all those social improvements that we now hope for… We have only to remember that to prevent progress at the top would soon prevent it all the way down, in order to see that this result is really the last thing we want.”

Hayek’s point: We all benefit from the excelling of a few. Counterintuitive as this might seem, and as contrary as its short-term effects may initially appear, its long-term outcome leads to more rapid economic growth through the creation and dissemination of products we would not otherwise have.

While this may not appear so clearly in our economics — and our growing political trend certainly aims to obscure it — its truth is quickly evident when applied back to football. Football would deteriorate if the politics of envy were applied to it. Fans of all those non-Super Bowl teams, even non-football fans, tune in to this game. A majority wish their teams were in it — and hope they will be next year — but they still want to see the best this year. They benefit from it.

And football itself does as well. It has advanced on the innovations of the excellent. Dynasties have benefitted for a while, but before long their innovations are commonplace throughout the league. As a result, the entire game and all its fans have benefitted. There is a reason why the tactics of 40, or even 10, years ago no longer prevail in today’s NFL. Nothing prevents teams using them now… except their desire to win.

When we compare our football to our politics, we see the two dominated by different goals: seeking to promote opportunity, versus seeking to dictate outcomes. The NFL does many things to promote equal opportunities for its teams — most notably having teams with the worst records having the first chance to pick the best players.

However, there is a big difference between seeking to promote opportunity, as football does, and seeking to dictate outcomes, as our politics increasingly seeks to do. And there is an economic danger in the latter, just as Hayek stated.

Instead of a Super Bowl economy, we have an also-ran one. It smacks of being an end-of-season game between two losing teams. There is a reason such games are not showcased on a special Sunday. Just like the enormous audience tuning into Sunday’s Super Bowl, we all want to participate in a winning economy.

It can be easy to overlook the obvious, especially when there are those telling us to do just that. So sometimes we need to look from a different angle to see it, especially when it offers us unfiltered facts we intuitively know.