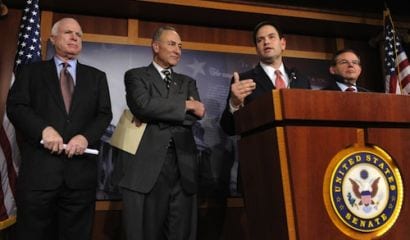 It has recently become fashionable in conservative circles to attack Senator Marco Rubio (R-FL) and the bipartisan “Gang of Eight” for putting forward a framework of principles for reform of America’s broken immigration system. The critiques from serious thinkers such as Utah Senator Mike Lee (perhaps my single favorite member of the U.S. Senate) and my American Spectator colleague Larry Thornberry, usually revolve around the word “amnesty” and suggest that Sen. Rubio is somehow caving in to leftist ideas in the way we normally expect from RINO and “establishment” Republicans, not from Tea Party champions.

These criticisms, both of the framework and of Senator Rubio, are misguided. They represent — but not for the reasons most people think — a primary cause of President Obama’s winning a second term and the primary reason that the GOP will have little chance at better future results unless the party — and the perception of the party — change dramatically.

The importance of the immigration debate is not mostly about its impact on several million Spanish-speaking illegal aliens (a term I don’t shy away from using). It is not even mostly about the economic impacts of immigration (a debate for another day). Instead, it is about how an ever-increasing number of voters view the Republican Party even if they have little interest in the details of immigration policy.

It is understandable that many on both sides of the political aisle argue over whether Hispanic voters are a naturally “conservative” constituency which has been turned off by the Republican position on immigration and related issues (such as in-state tuition for illegal aliens who were brought here at a young age by their parents) or whether they are a low-education, low-skill group whose desire or need for welfare and other public benefits makes them a target-rich environment for big-government Democrats.

Those who argue for the latter often point out that polls show Hispanics are no more interested in the immigration issue than the American electorate as a whole, concluding that Republicans are fooling themselves by thinking that caving into liberal immigration reform will increase the GOP share of the Hispanic vote.

Whether correct or not, this argument, like the current criticisms of the Gang of Eight framework, misses the point.

Republicans are not losing Hispanics because the party is perceived as anti-Hispanic or even hawkish on border enforcement. After all, that would not adequately explain the fact that according to exit polls Asian-Americans (who are not Hispanic and who tend to immigrate here legally) voted for Barack Obama by one percentage point more than Hispanics did.

The political impact of the immigration issue should not be seen principally as about immigrants. Rather, combined with Republican opposition to civil unions or gay marriage, it is part of a picture easily painted by Democrats and liberal media of the GOP as intolerant and bigoted.

The results among Hispanics and Asians reflect not that they have strong opinions about immigration, but that they see the Republican Party as bigots. They may not care very much about immigration as an issue, but that does not mean they do not view the political landscape through a lens of (in)tolerance and (un)openness for which a party’s immigration position is the most visible proxy.

It is the difference between a mat at your front door that says “Welcome” and one that says “Go Away.”

Young voters, who went for Obama over Romney by more than a 3-to-2 margin, are particularly susceptible to rejecting Republicans because of perceptions of bigotry and intolerance. A “millennial” may care little about abortion and may support at least a modicum of free-market economic policy. But for most of them it will be a cold day in hell before they will cast a vote that will allow their friends to call them bigots. Who wants to join today’s political equivalent of the “exclusive” and essentially xenophobic Republican country club of the 1950s?

Furthermore, a voter turned off from a political party for such a deeply personal reason is more likely lost from that party forever than someone who voted, for example, on the basis of idealistic (and perhaps idiotic) belief in Keynesian economics, Obamacare, or dovish foreign policy. A voter may be willing to re-examine her views on the economy, health care, and war with the addition of experience and evidence. But nothing will change her unwillingness to associate with the Bigot Party.

Perhaps one piece of evidence for my contention is that, according to analysis by the UK Guardian, “The only age group whose vote increased for Obama from 2008 to 2012 was 30-39 year-olds, as those who had formerly been 25-29 years old moved into 30-39 year-old age cohort.”

Many Republicans will rightly say — as I have — that if the party does not stand for certain core principles, it has little reason to exist and will have correspondingly little political success.

The question arises, specifically relating to the Gang of Eight framework: Do its tenets betray a fundamental Republican principle, such as by abandoning the rule of law through offering amnesty to those who broke our laws to come here and to stay here?

While the devil will be in the details of drafted legislation, for the principles as they are written I suggest the answer is a resounding “no.” Anyone who would step foot on a “path to citizenship” would do so behind those who had applied through the usual legal process, after paying taxes and fines, and, critically, after enforcement of the border and of rules governing the hiring of illegal aliens have reached a degree of robustness, of “operational control,” well beyond anything this nation has seen before.

As former Colorado Senate Minority Leader Josh Penry (a conservative Republican) put it, “If Rubio’s plan is ‘amnesty’ or a violation of the ‘rule of law,’ then so is plea bargaining a speeding ticket.”

The Obama administration has gutted internal enforcement of immigration laws and moved to enact DREAM Act-like non-enforcement of potential deportation of 1.7 million illegal aliens through executive order. In 2010, representatives of the Immigration and Customs Enforcement Officers union cast a unanimous Vote of No Confidence against ICE Director John Morton due to his “campaigning for immigration reforms aimed at large scale amnesty” and misrepresenting ICE data to make enforcement look stronger than it is. Mr. Morton remains in his job today, with Alabama Senator Jeff Sessions saying that comprehensive immigration reform is impossible unless Morton resigns.

But none of this reduces what should be Republican incentive to pass something along the lines of the Gang’s stated principles. Rather, it should increase GOP motivation: should the gate blocking the path to citizenship never be lifted due to lax border and employer-law enforcement, there will be only Barack Obama and Democrats to blame.

Furthermore, the details of immigration reform (as long as the major precepts of enforcement first are maintained) are irrelevant in comparison to the message that Republican-led reform would send. (It is politically critical that if there is a bill that Republicans can support and that will pass, Republicans rather than Barack Obama are perceived as its champions.)

Republican electoral woes cannot be understood through a narrow lens of any one issue. Rather it is a combination of a few key issues, primarily immigration and gay rights, which create a mental image in the minds of non-whites of all ages and young voters of all backgrounds of a political party rooted in bigotry, in fear of the other, which is to say a political party about which no other information is necessary to make a decision.

It is a sad reversal for the party that ended slavery and forced the civil rights movement down the throats of unwilling Democrats and their KKK henchmen.

Rather than lambast Marco Rubio — a likely serious contender for the 2016 Republican nomination for president along with House Budget Committee Chairman Paul Ryan (R-WI), who conspicuously and quickly offered public support for Rubio’s effort — the Gang of Eight’s framework should be applauded and supported by Republicans who realize that the GOP doesn’t have an immigration problem, it has a perception-of-intolerance problem.

The former would be bad enough, but manageable. The latter, unless soon changed, will catalyze the long-term irrelevance of the Grand Old Party.