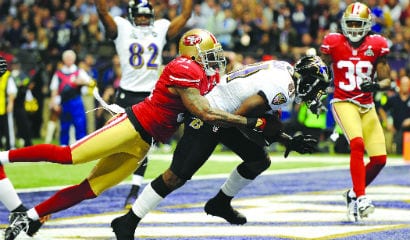 LONG AGO, my old economics professor, the superteacher C. Lowell Harriss, started our first class on Money and Banking by saying simply, “Economics is about the allocation of scarce goods.” This perfect definition has stood me in good stead all of these years, and especially today.

Today I was able to put into practice my own observations about the allocation of the scarcest and most precious of all goods: love. Today was an opportunity for me, the economics teacher, to teach about my favorite subject, the economics of love.

A very close relative, a young man married about four years now to a simply stunningly beautiful young woman, came down to our home in Rancho Mirage to watch the Super Bowl with me. I was happy to see him. He knows sports incomparably better than I do, knows all rules and practices, knows all about the players and coaches—in a word, just knows the subject cold. I am a fan. I am especially a fan of the Ravens because I am a native Marylander. But my very close relative, whom I will call T., knows the whole story, while I know bits and pieces. So again, on Sunday, as I drove home from my 12-step meeting, I was excited to see T. and to watch the game with him at a Super Bowl event at our beautiful club, Morningside.

However, when I walked in the door of our home, I beheld an agitated and worked-up T., frantically upset about a contretemps he had had that morning with his wife. According to him, she had responded to a question about why she was taking a shower in the morning instead of at night with a comment that harshly accused him of serious mental flaws.

He was, again, just agitated beyond words.

I told him that my interpretation of his wife’s words was exactly the opposite: she was merely defending herself against his seeming criticism and not mocking him at all. She was just making a joke about how much she liked to take showers.

He said he didn’t believe it. He was still hysterical.

However, football is football. And this was a very big game. We went off to the Super Bowl party and he started to slam down vodka drinks at a rate I have rarely seen. This calmed him remarkably, as did watching the game.

I have often thought to myself that the greatest pro–mental health program in the nation, maybe in the world, is the television broadcasting of top-notch sporting events. Even the most powerful and insightful therapist cannot provide the release from tension and the escape from anxiety that watching sports does for most men and some women. All of those sports shows probably keep tens of millions of American men from serious mischief against themselves or others. There is something powerfully liberating and empowering about watching athletes do something magnificently well.

My old Pop used to listen to the Washington Senators—outside, in the dark, on Caroline Avenue in Silver Spring, in, say, 1949, on a Silvertone (Sears Roebuck) radio with an extension cord. He called it “the great American anodyne.” Now, it’s an incomparably bigger, better phenomenon, and I suspect it takes away far more pain.

Very importantly, no one watches a football game and then says, “Hey, I want to kill people.” Viewers watch and then want to watch another game. But the experience is not like playing a multi-player shoot-’em-up where the experience might make the player want to shoot someone in real life.

So I love sports on TV and consider it a genuine national miracle. God bless the NBA and the NFL and MLB, say I. Also the NCAA. They are mass-producing mental health. And this was a great game, with my beloved Ravens racing to an early lead, and then a seesaw struggle after the lights went out.

BACK TO T. He kept telling me he wanted me to call his wife and say something drastic that would upset her and make her apologize. And so, I gave him this little speech:

“The idea that you in some way ‘win’ if you can bully or con your wife into apologizing is appealing but wrong. She will resent you for making her apologize for something she didn’t do wrong, and it will be a burr that will pop up somewhere else in the saddle of the marriage.

“Your goal is not to mow her down or cut her down to size. Your goal is to have a happy, cooperative spirit from day one. Your goal is to work together to invest not in one another’s egos, but in the super-valuable enterprise of the marriage itself. You live and thrive if the marriage is strong. You fail and live on the edge of extinction if you do not keep the peace and if you are constantly struggling for power.”

T. responded, “I just want her to apologize. She hurt me a lot.”

“I agree,” I said. “What you think she said is hurtful. But I have seen her around you for a long time now. Once in a while, she gets exasperated and snaps. But her love for you is overwhelming. It is much more likely that in the strain of the moment, you misinterpreted a perfectly harmless wisecrack.”

T. continued to want an apology and to look miserably unhappy.

“Look,” said I, “suppose she took your anger at her the wrong way. Suppose—God forbid!—that she packed up and left you. What would you do?”

Without a moment’s hesitation, he said, “I’d kill myself.”

“That’s what I thought you’d say. In that case, why stay angry at her and take even the slightest risk that she might do that? If she is a matter of life or death to you, why not do your very best to stay calm and allow time to heal the situation—along with kind words?

“The rarest of rare treasures is the love of a good woman—or man. It is the scarcest of goods on this planet. Do not do anything that could even possibly allow you to lose the love of this miraculously good woman. When you have her love, it’s like you own a 10-billion-dollar oil field. When you play these games with her, you risk losing that untold treasure over NOTHING. Over a hissy fit about a comment that meant nothing.

“Why not send her a text right now that says, ‘I know I am not the best possible husband. I know I have put you through torture over and over again. I know that you are very possibly the best wife there is. I am in perpetual shock and awe that I have you as my wife. But even so, what you said to me this morning was beyond the pale. It cut me deeply. But I know that it’s nothing compared to what I have done to you. So, let’s just put it behind us and move on to the future.’

“Why don’t you try to do that, and maybe add, ‘And, of course, I love you more every day and I just want to keep us together more than anything else in the world.’”

Again, T. looked dubious, but less dubious than he had.

“Marriage and love are not about who’s right and who’s wrong,” I said to him. “Love and marriage are about who’s left, and the key for you is to be one of the couples in the field who are still together 50 years down the road. I mean, is there anyone else you would ever think of marrying?”

“Of course not,” he answered firmly.

“Then,” said I, the economist, “invest in peace of mind. Don’t invest in pillaging and looting your wife’s self-esteem. Peace is beautiful, as my old pal Al Burton says. Make sure you make peace your top priority. The dividends that peace pays in a marriage are overwhelming. Non-taxable. Permanent. Not subject to changes in federal law, at least not yet.”

At this point, T. began to cry and I knew he was thinking about the whole subject more seriously.

“Take a leaf from your old Dad,” I said. “Mommy and I have many assets. Some are underwater in the recession, and some have done well. But the only asset that really means life or death to us is having each other. Investing in a generation of peace in your own life is the best investment you can make.”

Of course, I got that phrase from Mr. Nixon. (By the way, we who worked for Mr. Nixon often thought that his goal, a generation of peace, was impossible and a fantasy. But he got it and gave it to us. And what did we give him? Blessed are the peacemakers—especially the ones we did not see at the time.)

I then offered T. another powerful quote.

When John F. Kennedy honored Winston Churchill, he said something like, “He mobilized the English language and sent it off to war.” I told this to T.: “Try mobilizing your gifts of articulation and sending them off to make peace. The value of the asset you acquire by just a few loving words is simply inestimable.”

By this point, T. was almost sold. “Years ago,” I told him, “I worked with Jesse Jackson. He had a great phrase he would use when he was in a quarrel with someone: ‘Let us move from battleground, to common ground, to higher ground.’ Your common ground when you are calm is that you know your wife’s love is your absolutely most valuable, happiness-producing asset. You toss it away at your peril, indeed at real danger of losing your life.”

There was a long pause while we watched the game in silence. Then T. spoke after another long sip of vodka.

“Thanks. You’re totally right,” said T. “Will you send my wife a text telling her I’ll be home as soon as I sober up?”

“Of course. And remember what Buffett says: ‘When you have a good stock in a good company, your preferred holding period is forever.’”

My beloved Ravens won. But T. and I would have been winners no matter who on the gridiron got the most points.