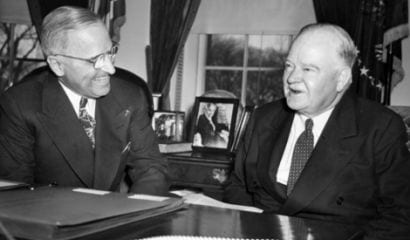 Presidents’ Day is today. I teach and write about presidents, and thus Presidents’ Day always prompts me to strange musings concerning our past chief executives. This year is no exception, as I’m thinking about six particular presidents: Barack Obama, George W. Bush, FDR, Herbert Hoover, Bill Clinton, and Harry Truman. How could I possibly connect these six? What might they have in common? Bear with me — I’ll start and end with Obama.

Barack Obama, and particularly his re-election campaign, has achieved something quite dubious of a sitting president, and which his liberal supporters don’t mind at all. Namely, he has done a thoroughly reprehensible job of blaming every woe over the last four years — with more to come — on his predecessor. Never mind that every single economic indicator under Obama is not only worse than under George W. Bush, but far worse. Obama has presided over a steadily worsening economic disaster, one that is stacking up as one of the most dreadful economic records of any president in history. And yet, as he does, he shamelessly passes the buck to his predecessor, blaming George W. Bush.

Not only is this a very low-character thing for an American president to do — unbecoming, un-presidential, and unlike a genuine leader — but it’s precisely what Americans presidents don’t do; they don’t treat each other like this, having much more respect for the job and those who have held it. There is a long-time gentlemen’s understanding, honored by nearly every president, that you don’t blame your predecessor for your problems.

That camaraderie is detailed by Nancy Gibbs and Michael Duffy, two Time magazine veterans, in their excellent 2012 book The Presidents Club. As Gibbs and Duffy note, presidents share a patriotic, dutiful attitude of country-first/office-first — the chief, abiding rule of their “club” code. It is the common bond among club members, a code that (they all agree) must transcend party politics. “The club serves to protect the office,” write Gibbs and Duffy. Thus, former presidents should not openly criticize the current occupant, and vice versa — a code that most have followed, with rare exceptions.

One such exception is Barack Obama, whose go-to scapegoat for everything is George W. Bush.

Yet, there was another exception: Franklin Delano Roosevelt. FDR, like Obama, needed to conjure up various demons to advance his “progressive” agenda, with the vile rich atop his enemies list. But FDR also dumped on his Republican predecessor. He blamed everything on Herbert Hoover.

For the record, this really upset Hoover. Hoover was hurt deeply by FDR constantly trashing him, his record, his policies, his character. FDR did not treat Hoover the way we Americans hope and expect our presidents to treat one another. Their relationship became toxic. FDR’s successor, Harry Truman, took notice. “Roosevelt couldn’t stand him,” said Truman of Hoover, “and he [Hoover] hated Roosevelt.”

Even sadder, and quite stunning, is the awful fact that both FDR and Obama got away with this blame-game. FDR was able to successfully blame everything on Hoover in successful re-election upon re-election. Liberal historians have since done likewise, picking up Roosevelt’s torch, exempting the New Dealer from any culpability for the dismal economy he presided over throughout his tenure. Obama is likewise succeeding with his campaign against George W. Bush. A literal majority (60%, according to one exit poll) of those who voted for Obama in 2012 swallowed Obama’s Bush blame-game hook, line, and sinker, and they surely always will.

How do Harry Truman and Bill Clinton relate to this?

Truman and Clinton, like Obama and FDR, were, of course, both Democrats. Truman, however, was willing to put party aside in order to do what was right. He had character by the boatload. He saw how troubled Hoover was by FDR’s mistreatment. Thus, Truman, a good man, did what he could to remedy the situation. He reached out to Hoover after World War II and sought to use the maligned ex-president in several very significant projects, including post-war reconstruction for Europe.

“I knew what I had to do,” said Truman of the huge challenge he faced in Europe, “and I knew just the man I wanted to help me.” And so, Truman employed Hoover’s considerable managerial talents. He enlisted Hoover in an intense effort (pre-Marshall Plan) to feed a Europe threatened by starvation and Soviet communism.

It was a very gracious gesture, and pure Truman. Truman saw a wrong by his fellow Democrat, FDR, and strived to correct it, regardless of his party loyalties.

Bill Clinton, unfortunately, is the anti-Truman. When Clinton, who is very friendly with both George W. Bush and his father, learned of Obama’s campaign to blame Bush for every ill in America, including those that Obama has not merely created but mushroomed to unprecedentedly destructive levels, what did Clinton do? Did he telephone Obama and say, “Hey, back off, that isn’t right and you know it. We presidents don’t treat ex-presidents that way.”

Bill Clinton had done what he did best. As fellow Democrat Bob Kerrey once put it, Clinton is an “unusually good liar.” Like the tawdry personal behavior he exhibited throughout his time in the Oval Office, Clinton had again showed himself as the anti-Truman.

And no doubt, when the 2012 campaign was all over, and Clinton, who perhaps even privately voted for Mitt Romney (it wouldn’t surprise me), surely flew to Texas and (Joe Biden-like) grinned and back-slapped George W. Bush and said, “Hey, no hard feelings, pal!”

And George W. Bush, no doubt, did what he always did, stoically turning the other cheek, forgiving Clinton, and gently suffering the insults in silence — and again helping to make possible another Obama term.