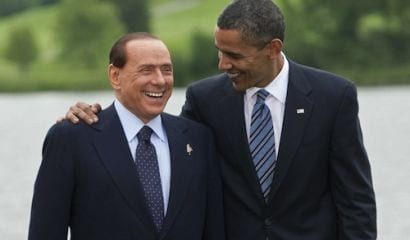 In November 2011, Silvio Berlusconi resigned as Prime Minister of Italy and was succeeded by EU Commissioner Mario Monti. The Associated Press proclaimed Berlusconi’s resignation an “end of an era.”

There was a compelling case for that conclusion. Italy was a fiscal basket case and Berlusconi was plagued by corruption and scandal. Just last October, Berlusconi was convicted of tax evasion and sentenced to four years in prison (which was reduced to one year which he is likely never to serve). Then there are the allegations of sex with an under-aged prostitute known as Ruby whom he allegedly met at a “bunga bunga” party in 2010. At one point, Berlusconi claimed Ruby was then Egyptian President Hosni Mubarak’s granddaughter. As of this writing, Berlusconi is still awaiting trial.

Yet at the time of his resignation I did not believe we had heard the last of Berlusconi:

Even in the best of times, most Italian governments have a life of a year. Since the end of WWII, Italy has had 60 coalition governments. I don’t expect this new coalition under Monti to last appreciably longer than its predecessors. In fact, I expect to see several coalition governments come and go over the next 18 to 24 months. In which case, it would come as no shock to me if Berlusconi were to make his way back into power.

Well, another Italian election has come and gone and Monti, who was perceived as a puppet of both Berlin and Brussels, is out as Prime Minister. So who is in? At the moment, the answer to that question is unknown. It could be Pier Luigi Bersani, leader of the center-left coalition Common Good who appears to have a majority in the Chamber of Deputies. However, Berlusconi’s center-right coalition appears to have denied Bersani a majority in the Senate and could soon find his way back to power. As of this writing, Berlusconi has indicated he is open to forming a grand coalition with Bersani. Whether or not Berlusconi becomes Prime Minister, rumors of his political demise have been greatly exxagerated.

The wild card in all of this is comedian Beppe Grillo and his Five Star Movement, which has become the third largest group in both houses. For his part, Grillo has pledged not to support either Berlusconi or Bersani. All of which could very well mean that Italians may go back to the polls again in a matter of months. One way or another, methinks Berlusconi will become Italy’s Prime Minister for a fourth time. I think this will come to pass because the Italian electorate has thrice previously elected Berlusconi Prime Minister. Why wouldn’t they elect him for a fourth time?

It’s not like Berlusconi is exactly an unknown quantity. Aside from frequently being on the wrong side of law, Berlusconi says a lot of stupid things. Just this past January, Berlusconi not only praised the leadership of Benito Mussolini but praised Il Duce for backing Hitler during the Second World War (although he was quick to criticize Mussolini for implementing racial laws against Italy’s Jewish population).

Berlusconi is undoubtedly a corrupt politician but he isn’t the first corrupt Italian politician nor will he be the last. Berlusconi is no angel but he is the devil that Italy knows. For better or for worse, Italians know that Berlusconi is his own man. Berlusconi is many things. A puppet for German Chancellor Angela Merkel is not one of them.

From time to time, Italy has technocrat Prime Ministers such as Monti. It might very well be that Monti has never taken a bribe in his life much less attended a “bunga bunga” party. Yet Monti has not shown himself to be any more competent in extricating Italy out of its precarious financial situation than Berlusconi and Italians know it whether they live in Reggio Calabria in the South or Reggio Emilia in the North. Some might take Berlusconi to task for his plans to marry a woman fifty years his junior but others will envy him for it. Berlusconi might one day go to jail but it won’t be for being boring.

Berlusconi turns 77 in September and shows no signs of slowing down. So long as Berlusconi has breath in his body he should not be written off as a political force in Italy. Whatever comes of Italy’s election, never underestimate anyone named Berlusconi.