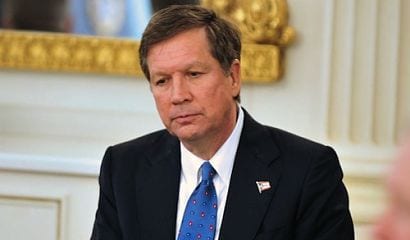 Since the Supreme Court ruled on Obamacare last June, the White House and its allies in the media have diligently promoted the myth that the decision was an unqualified victory for the supporters of “reform.” In reality, the Supremes dealt the Obama administration an important defeat on one of the two primary issues decided, namely whether the federal government has the right to withhold all matching funds from a state that fails to expand Medicaid according to the dictates of the unpopular health care law.

Medicaid is a joint state-federal program, yet a provision of Obamacare required the withholding of all federal funds from noncompliant states. The plaintiffs argued that this was so coercive that it amounted to an unconstitutional “commandeering” of the states. Seven of the nine justices agreed. This victory, despite the Court’s ruling that the individual mandate is somehow a tax, was viewed by many as an opportunity for GOP governors to thwart implementation of an integral component of the law.

It’s difficult to decide who among them deserves the most scorn, but an excellent candidate is Rick Scott. Governor Scott was ostensibly one of Obamacare’s most stalwart opponents. He founded Conservatives for Patients’ Rights, an organization allegedly dedicated to promoting free-market alternatives to the expansion of government-run health care and, as Kyle Peterson recently pointed out, wrote an opinion piece for The American Spectator specifically denouncing Obamacare’s provision for Medicaid expansion.

Moreover, it was Scott’s state that led more than two dozen others all the way to the Supreme Court in the successful bid to have Obamacare’s Medicaid provision struck down. Nonetheless, on February 20, Scott announced that he had “wrestled” with the question in the aftermath of the November election and ultimately decided that Obamacare’s expansion of Medicaid “is a compassionate, common sense step forward.” Like many politicians, in other words, Scott wrestled with his conscience and the latter lost the bout.

Sadly, Scott’s venality is not unique among these GOP “leaders.” The flip-flop of Ohio’s John Kasich is another profile in political cowardice. It is not too much to say that Kasich won the governorship of his state by aligning himself with the Tea Party movement and vociferously denouncing Obamacare in countless stump speeches, talk radio, and television appearances. Yet, in early February, he caved on the Medicaid issue, saying that “It makes great sense for the state of Ohio because it will allow us to provide greater care with our own dollars.”

But Kasich, Scott, and the rest of these GOP opportunists know full well that participation in Obamacare’s Medicaid scheme does not “make sense.” They know it will lead to fiscal disasters in every state that falls for this scam. The federal government will inevitably cut back its financial contribution to the vast expansion of Medicaid, leaving the states holding the fiscal bag. Scott, Kasich, and their six accomplices will be out of office by then, of course, leaving their hapless successors to clean up the disaster.

In fact, the groundwork for a federal cutback on matching funds is explicitly laid out in Obamacare. Avik Roy explains, “For the first three years of the expansion, federal taxpayers will pick up the full cost.… This 100 percent funding rate will phase down to 95 percent in 2017, 94 percent in 2018, 93 percent in 2019, and 90 percent in 2020.” And, considering the deep fiscal hole into which Obama is digging us, we hardly need to call on Nostradamus to predict that Washington will welch on its 90% commitment.

This will leave the states with millions of new Medicaid enrollees and virtually no assistance from Washington to cover the cost of their increasingly expensive health care, thus leaving them with a choice between kicking poor people out of the program and cutting other basic services. As Betsy McCaughey pointed out last week, “Medicaid is already consuming a third or more of many state budgets. States would literally have to stop funding roads, public schools, and other essential services to pay for Medicaid.”

What makes this so infuriating is that these Republican governors are waving the white flag after winning a hard fought legal battle in order to escape this very dilemma. The Supreme Court ruled, by a 7-2 majority, that Obamacare’s Medicaid mandate was unconstitutional. Comparing a conditional grant like the federal contribution to Medicaid to a contract, the majority put it thus: “The legitimacy of Congress’s exercise of the spending power… rests on whether the State voluntarily and knowingly accepts the terms of this contract.”

Now, putting their own political prospects ahead of the fiscal health of their states, Governors Scott, Kasich, Brewer, Snyder, Sandoval, Christie, Martinez, and Dalrymple have “voluntarily and knowingly” accepted the terms of the contracts. Most of these eight governors probably expect to be working in Washington as elected officials or lobbyists when the bill comes due, and at least one has his eye on the White House. With Republicans like these, who needs Democrats?