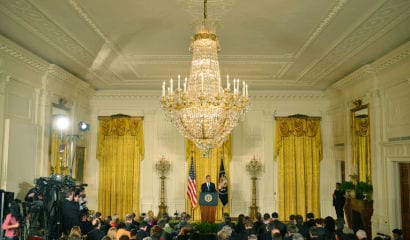 Many conservatives, myself included, find themselves in despair about the combination of Barack Obama’s reign of narcissism and the Republican opposition’s incapacities. We might take heart, however, in considering the possibility that the sandworm has begun to turn against The One. At least a few small signs indicate that Obama might have pushed his hyperactive self-regard too far.

Obama’s job approval, as per Gallup, has dropped from +13 to dead even — 46-46 — in just about a week. Even the rabidly liberal Bill Keller of the New York Times is slamming Obama’s handling of the sequester. Washington Post fact checker Glenn Kessler is giving Obama so many Pinocchios that Geppetto may need to work overtime to keep up with the demand. Joe Scarborough has taken time out from bashing conservatives to aim some serious blows at Obama as well. Bob Woodward is famously calling out Obama’s prevarications and his staff’s bully-boy tactics.

And Saturday Night Live is poking great fun at the Ego-in-Chief for “really hav[ing] no idea about how money works or budgets work.” It is when the comedians (Stewart, Leno) turn heavily on a politician that the politician really should start to worry.

It’s not only the sequester that is getting Obama into trouble. Even the foot-licking establishment media is getting tired of Obama’s disdain, as indicated not just by the Woodward flap but also by the relative conniption fit about lack of access to Obama’s golf round with Tiger Woods. And the ubiquity of the Obamas (Super Bowl interviews and Oscar announcements), combined with increasing public recognition of their extravagant lifestyles, may have finally begun to wear on the public’s patience. Even a celebrity-drenched culture eventually wants relief when individual celebrities intrude into too many areas of life.

Additionally, as the perspicacious Fred Barnes notes this week, even the New York Times, among others, also is looking askance at the half-million-dollar pay-to-play tactics of the new Obamite permanent campaign, Organizing for Action. As the liberal Fred Wertheimer of Democracy 21 put it on Monday, “Organizing for Action is a national scandal waiting to happen.”

Most substantively, our perpetually campaigning president is likely to start suffering again, as he did in 2010, from a public backlash against ObamaCare. When even uber-Democrat Donna Brazile starts complaining about her health-insurance premiums going up even if she can’t figure out that this is a failure of ObamaCare — it’s a sign that Americans are going to be increasingly unhappy with the prices, the options, or both, that result from the president’s health-care regime. Combine that with all of Obamacare’s taxes, including the fiercely uncompassionate medical device tax, and the new system’s eponymous creator is likely to bear the brunt of growing frustration, dissatisfaction, and anger.

Not that Obama seems to recognize this. His vast hubris, his insufferable imperiousness, and his ideological imperviousness to empirical evidence all combine to make him increasingly immune to constructive criticism. His second-term appointments — what an only intermittently political friend of mine described as Obama’s “Team of Lackeys” (as opposed to Lincoln’s famed Team of Rivals) — are horribly unlikely to challenge, even internally, the biases or edicts of their Oval Office overlord.

One gets the impression that Obama is only a small step or two removed from seeing himself as a real-life Kwisatz Haderach, the Dune messiah also known as Paul Muad’Dib, with intelligence and insight so far above ordinary mortals as to command obeisance. (“I think I could probably do every job on the campaign better than the people I’ll hire to do it.”) There’s something almost otherworldly, and not in a good way, about this man’s self-absorption and his assumption that his own wisdom is infallible and infinite. The American body politic to him is just a giant sandworm to be ridden and controlled to effect his own exalted sense of cosmic fairness.

Fortunately, James Madison, Roger Sherman, and company created for us a constitutional system that does not easily lend itself to political messianism. As ambition counteracts ambition, and as a multiplicity of interests continues to frustrate efforts at empire building, even the Obamessiah is now relegated to variations on a consistent, whiny refrain: “I’m not a dictator”; “I’m not a king”; “I’m not the emperor of the United States.” At some point, his frustration may well boil over in a way so unattractive as to finally make people wise us to the reality that, as Mark Levin puts it, Obama “is not a nice guy.”

Just the other day at lunch, a friend of mine, a businessman with good connections across the country, recounted a conversation he had with a Democratic insider while Obama was in the midst of his first presidential race. “It’ll take the American people five years,” said the insider, “to realize what Obama’s really about and what he’s really like.” Then, presumably, the public would catch on to his manifold defects.

That bit of insight from the insider came nearly five years ago. As my friend said, we may now be seeing the first cracks in Obama’s façade. The first signs of ultimate backlash may now be appearing. Obama is no Kwisatz Haderach. The sandworm may indeed turn against him.

That, by the way, is almost surely what Frank Herbert, the author of the Dune books, would want. As Herbert himself put it, his dream for a healthy society would be “to make a world where human kind can make its own future from moment to moment, free of one man’s vision.” And: “The bottom line of the Dune trilogy is: beware of heroes. Much better [to] rely on your own judgment, and your own mistakes.” In Obama’s world, of course, it is his judgment, via the apparatus of the state, that should always predominate. The American public, accustomed to more freedom than Obama would allow, may be starting to realize that Obama himself is the mistake.