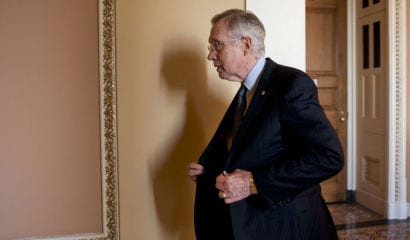 At 12:45 a.m. last Thursday morning, freshman Kentucky Senator Rand Paul sat down. For 12 hours and 52 minutes, the liberty-minded Republican had held the Senate floor, with the occasional help from a handful of Republican and Democratic colleagues, delaying the nomination of John Brennan to head the Central Intelligence Agency. Paul admitted early on that he didn’t have enough votes to derail the nomination. His decision to exercise a senator’s right to speak without time limit forced the Senate, the press, and the American people to focus on a controversial issue.

Paul’s filibuster was motivated by Attorney General Eric Holder’s controversial claim that the President has the authority to kill American citizens on American soil without due process of law. It also showed Washington what a real filibuster looked like.

For the past several years, Senate Majority Leader Harry Reid has been complaining about Republican obstructionism, claiming that the GOP is preventing the Senate from getting anything done by filibustering every significant piece of legislation Reid brings to the floor. The problem for Reid is that until Rand Paul stood up to speak on Brennan’s nomination, Republicans hadn’t actually filibustered anything in years.

A quick look back at how the Senate has operated in the past highlights the extent to which Reid, an admittedly skillful political maneuverer, has brought meaningful legislative activity to an effective halt in the Upper Chamber.

Senate business is usually conducted under “unanimous consent” rules. Strict limits are placed on, for example, what bills will be considered, which amendments are in order at which times, and limits on debate. But all of these rules can be set aside if no one objects. Unanimous consent agreements, also known as “time agreements,” set out which amendments will be debated and how much time Senators have to debate them, and when the final bill will come up for a vote.

When the majority and minority leaders, or the senators they designate to lead the floor debate on major legislation, have the rough outlines of a unanimous consent agreement in place, they notify each senator’s office. Individual senators then have a few hours to register any objections. A senator may want to propose a minor amendment or seek an up or down vote on another, more controversial amendment. Once every senator is satisfied with how the debate will proceed, the majority leader seeks unanimous consent from the floor to proceed with the bill under the agreed conditions.

In exchange for consideration of their amendments, the minority surrenders its right to filibuster the bill, and all senators know that the legislation will soon get a final vote. That’s how things in the Senate have traditionally worked. Harry Reid has abandoned the practice, much to the advantage of his party and the president.

Instead of agreeing to the terms of debate at the beginning, Reid has consistently sought to shut down all discussion of major issues and prevent Republican amendments from ever making it to the floor. Using the strict Senate rules that govern in the absence of unanimous consent, Reid offers a series of amendments to every bill he brings to the floor using a practice known as “filling the tree.” No new amendments can be offered until one of Reid’s is considered or withdrawn. (Reid, of course, never actually brings any of his amendments up for consideration.) Simultaneously, Reid files a cloture motion to close debate on the bill that hasn’t even been debated yet.

Until a century ago, a lone senator could hold up any legislation indefinitely. In 1917, the Senate adopted its first cloture rule, allowing senators to end debate with a two-thirds vote. This means Mr. Smith wouldn’t have been able to hold the floor as long as he did if Frank Capra had done a little more research. In 1975, the Senate reduced the threshold for cloture to three-fifths. Now a vote from any, 60 of our current 100 Senators will bring a filibuster to an end.

Reid has been filing cloture motions against filibusters that don’t exist. Republicans haven’t been clogging the Senate floor, or staying up all night reading from phone books. They’ve voted against closing debate before it’s even started. They’ve insisted upon their right to offer amendments to pending legislation.

Reid has refused. He doesn’t want to expose his Democratic colleagues to tough votes on Republican alternatives. He likes to demagogue against what is in reality his own willful obstructionism. And in the long run, he’d like to abolish the supermajority rules that prevent him from wielding the same majoritarian power as the speaker of the House.

Sen. Paul’s filibuster showed why Senate traditions need to be protected. He and a few colleagues forced the Senate to consider a complex issue in a thoughtful way. For what it’s worth, they also made the president wait one more day to get his new CIA director. Both parties are to blame for Washington’s problems. Loose talk about a lack of bipartisanship is misleading: for decades we’ve had a long-standing bipartisan agreement to spend more money than we actually have, ignore mounting entitlement insolvency, and not enforce our immigration laws.

But the Senate’s failure to pass a budget, or get much of anything worthwhile done, is almost entirely the fault of Reid and the Senate Democrats who continue to accept him as their leader. They are the real obstructionists.