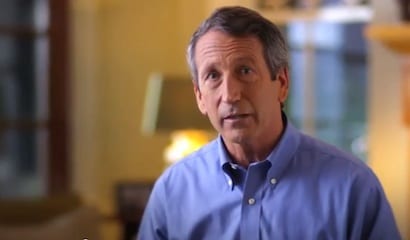 I have come to learn that life has many turns and twists. Some come by chance, providence, or God’s plan; others instead seem more the consequences of our own action or inaction—for good or bad. I now stand at one of those turning points.

I had thought politics was forever over for me, yet I am now running for Congress, campaigning on a longstanding belief in the need for more liberty and limited government.

A U.S. senator, Jim DeMint, retired, something that never happens in our state. Our governor then appointed incumbent Congressman Tim Scott to the Senate, and my phone line lit up. I was initially more than reluctant to run for the open seat. But I was told by many that I was needed in Washington because of the way I had focused on debt, deficits, and government spending at a time when it was not in vogue, as it is today.

For more than a decade, I had the privilege of trying to advance the conservative cause in office, and I did my best to watch out for the taxpayer. In Congress, I was rated first among all my peers by both the National Taxpayers Union and Citizens Against Government Waste in efforts to limit federal spending and taxation. I was similarly ranked the most financially conservative governor in the country by the Cato Institute. I was the first governor in America to formally reject stimulus funds, believing a problem created by too much debt would never be solved by yet more debt.

I had a host of other accomplishments tied to advancing free-market principles and adherence to constitutionally limited government, or in even making the government we have work better for the people who paid for it. But those efforts were washed ashore in the wake of my very public failure in 2009. I finished my term, but afterward retreated to our family farm and spent a year there rebuilding life from the inside out. Though in no way do I recommend the curriculum to getting there, I have come to believe that in many ways you learn far more in the valleys of life than on its mountaintops. I have grasped in a new way the meaning of God’s grace and its reflection in others. I listen in ways I never did before. I approach many things differently and with a far greater level of humility.

I recognize one of the consequences of my failure is that some will never see a way to a second chance for me, but I am amazed by the number who do.

And so I move forward, realizing in whole new ways the blessing of life and the opportunity each of us has, even as imperfect messengers, to advance ideas that have long burned inside. The need for all of us as conservatives to do so, whatever our station in life, cannot be understated. Never before in the history of our republic have we found ourselves at this sort of tipping point as a civilization.

Think about it for a moment: Throughout our history, every threat to our survival and prosperity as a free people has been external, whether it was the British, the Germans, or the Russians. Today, for the first time, the threat is internal in nature. The danger lies not in what another nation might do to us, but in what we might do to ourselves. In that vein, Admiral Mike Mullen, former chairman of the Joint Chiefs of Staff, when asked the greatest threat to American sovereignty, answered the American debt.

If we don’t stop the spending train in Washington, I believe there will be incredibly dire consequences for the dollar, the value of everything we might have saved, and even for the American way of life. When the Congressional Budget Office says that in just 12 years, there will be enough money only to pay for interest and entitlements, what we are really talking about is far greater than money. We face a real and present danger to liberty, the sacred hallmark of the American experiment.

So I’m running. I don’t know whether a win or a loss is coming my way in this election, but I hope to humbly apply lessons learned on the way up—in Congress and in the governorship—and those learned on the way down. I also hope to contribute to one of the great debates of our civilization: how we get our financial house in order. It’s never been more important that we all make our voices heard.