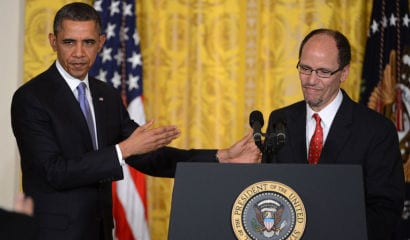 Thomas Perez is a multiple prevaricator.

When the Inspector General of the Department of Justice (henceforth DoJ) last week issued a report blistering DoJ’s Civil Rights Division, much attention focused on the IG’s recognition that division chief Perez, under oath, had “not reflect[ed] the entire story regarding the involvement of political appointees” in the now-infamous 2009 decision to dismiss voter-intimidation cases against several New Black Panthers in Philadelphia.

While this aspect of Perez’s dishonesty deserves all the attention it can garner (also deserving attention is the extreme dubiousness of the IG’s assertion that Perez’s lies about political-appointee interference were not “intentional”), it is far from the only example, from that very same testimony, of Perez pushing stories that were flagrantly false.

Perez came awfully close to perjury, and some might argue that he committed it, when discussing the far more important, broader issue that was the main focus of the IG report. (It boggles belief, by the way, that the IG never even discussed this untruth, considering that it so directly involved the larger substance of his report.) That broader issue was the question, fairly definitively answered in the affirmative by the IG, of whether the Civil Rights Division is a hotbed of hostility against the very idea of race-neutral enforcement of civil rights and voting rights laws.

When testifying under oath on May 14, 2010, before the U.S. Commission on Civil Rights, Perez in effect denied that any such hostility existed. “We don’t have people of that ilk” in the Division, he said. The question, he said, is “moot.” Again and again, under questioning by Commissioner Todd Gaziano, Perez said that if such an attitude existed, he would put a stop to it, and he indicated that such a practice was completely alien to his experience with and knowledge of his division’s practices.

This was no small matter. It encompassed almost the entirety of Gaziano’s initial questioning of Perez, taking up a significant portion of the hearing.

Yet on the very day before acting dumbfounded by the accusation of race-based enforcement of the laws, Perez had hosted a lengthy meeting during which this very subject was broached in great detail. As whistleblower J. Christian Adams recounted in his meticulously reported book Injustice: Exposing the Racial Agenda of the Obama Justice Department, “At the meeting, [fellow whistleblower Christopher] Coates explained via speakerphone from South Carolina the long and detailed history of hostility toward race-neutral law enforcement inside the Civil Rights Division.” Included in this history were the accounts, later confirmed to the IG by more than a dozen people inside DoJ, about how Obama political appointee Julie Fernandes had twice made statements in open meetings to the effect that certain parts of laws were not to be enforced at all, and others were not to be enforced against black perpetrators.

“Essentially,” wrote Adams, “Perez was arguing that he had never heard anyone at the Civil Rights Division ever mention hostility toward race-neutral law enforcement, something Coates had warned him about just before his testimony.” And, as we now know from the IG report (and from similar reporting even by the Washington Post), that attitude was so pervasive within the division that no sentient being could possibly escape it.

Moreover, that very subject had already been the focus of reporting stemming from the New Black Panther case since the previous summer, and had been repeatedly and extensively discussed in media accounts leading up to Perez’s testimony. It was at the very heart of the Commission’s entire investigation into the New Black Panther case and surrounding controversies. Perez knew, beyond a shadow of a doubt, that these accusations of race-based enforcement and certainly of attitudinal hostility against race-neutral enforcement were rampant. He indicated in his testimony that he would not put up with any such nonsense. Yet, as is clear from the IG report, these exact attitudes were widespread within his division, which he had now led for some five solid months.

In short, he deliberately misled Commissioner Gaziano when he played dumb about the existence of this problem within his department — if, that is, he was even being honest when he said such an attitude would be a problem in the first place. After all, with regard at least to Section 5 of the Civil Rights Act — which specifically involves voting rights — Perez himself told the IG that he thought Section 5 was not intended to protect white people. This is from the report:

Perez also told the OIG that he believed interpreting the retrogressive-effect prong of the analysis to cover White citizens would be inconsistent with the history of and intent behind Section 5, which he stated was enacted to remedy the specific problem of discrimination against racial minorities. In his February 2011 letter, Perez noted that the Division has always understood the term “minority” to mean not numerical minority, but rather “an identifiable and specially disadvantaged group.”

Compare that statement with Perez’s statement under oath to the U.S. Commission on Civil Rights. Gaziano asked this direct question: “Do you agree that the voting rights laws should always be enforced in a race-neutral manner?” Perez’s clear, unambiguous answer: “Yes, sir.”

So, which is it? That “yes, sir” directly contradicts what he told the IG. Was that definitive statement under oath a lie — or was he instead lying to the IG? Logic says it must be one or the other.

Likewise, when asked this — “Wouldn’t you want to clarify to all of the people who may have heard it that that is not the policy of the Department and that you would not tolerate that kind of a policy?” — Perez again answered: “Yes, sir.” Yet there is no indication in the IG report that Perez, either before or after this hearing, made any concerted effort (other than a random statement or two) to ensure that these sorts of race-based enforcement choices were no longer made.

Meanwhile, a very similar scenario applied to the more-discussed issue of whether Perez “intentionally” misled the commission and Congress (in several different hearings) about involvement of political appointees in the decision to dismiss the New Black Panther case. The IG report dryly notes that Perez “should have sought more details… about the nature and extent of the participation of political employees in the [Panther] decision in advance of his testimony before the Commission.” That’s as strong an understatement as could be imagined. From the very first print reports about the dismissal, which came in both a news story and an editorial on May 29, 2009 in the Washington Times (Michelle Malkin apparently beat us at the WashTimes in an online posting the day before), the issue of political interference in the decision was front and center.

Indeed, here is reporter Jerry Seper’s opening sentence in that front-page article, which puts the issue squarely in its very first four words: “Justice Department political appointees overruled career lawyers and ended a civil complaint accusing three members of the New Black Panther Party for Self-Defense of wielding a nightstick and intimidating voters at a Philadelphia polling place last Election Day, according to documents and interviews.”

The only way that Perez could possibly have failed to know about the extremely extensive political-appointee involvement is if he deliberately chose not to investigate the degree of that involvement — in the face of repeated, obvious, high-profile interest in the question. If somebody in charge chooses not to ascertain the accuracy of an answer to a question he knows he will be asked — just so he can avoid perjuring himself when he denies any direct knowledge that the truth lay in an answer that would prove inconvenient — then his answers are the moral equivalent of a lie even if his weasel words or weaselly actions technically evade the outright existence of a direct lie.

If one re-reads the transcript of Perez’s testimony to the Civil Rights Commission, one cannot avoid being struck at the extent of his lawyerly evasions of the questions. (I was at the hearing: In person, the evasions seemed even more blatant than they do in print.)

Finally, let it be noted, on a point related to the actual record showing that political appointees did indeed decline to enforce parts of voting rights laws despite multiple staff-attorney recommendations to the contrary, the contentions of Perez, Attorney General Eric Holder, and others were remarkable similar. To wit: that those non-enforcement decisions resulted from an allowable prioritization of the DoJ attention in light of insufficient resources to go full-bore after all possible infractions. Yet at the same time these Obamite officials were claiming that the poor Civil Rights Division was stretched too thinly to handle certain cases, Perez was bragging to left-wing audiences about the unprecedented level of new resources the Obama administration had devoted to the Civil Rights Division — and, yet, the division by some accounts has actually pursued fewer cases than the Bush administration did. Meanwhile, as Adams reported in Injustice, the DoJ held a “retreat” on April 27, 2010 for some 1,000 employees in which the Civil Rights Division “participated in a skit contest” for which they had “for weeks… spent work time writing scripts, singing songs, and rehearsing…. One DoJ employee told me that earning a six-figure salary while watching the skits made him feel such shame, embarrassment, and disgust that he felt physically ill.”

Surely a few skits could have been sacrificed so that officials could enforce laws to make sure that voting rolls are accurate.

Just as with the misdirectional testimony about the political-appointee involvement in the Panther case and about the Civil Rights Division’s hostility against race-neutral enforcement of the law, Perez’s claim that a lack of resources was responsible for non-enforcement decisions is such an absurdity as to amount, no matter what technical explanations he might offer, to the moral equivalent of a flat-out lie.

This man is not only a radical, but disgustingly dishonest. He has no place in government service.

Ben Stein
Follow Their Stories:
View More
Ben Stein is a writer, actor, economist, and lawyer living in Beverly Hills and Malibu. He writes “Ben Stein’s Diary” for every issue of The American Spectator.
Most Popular
1
Special Report
Evidence Mounts — Chauvin Did Not Murder Floyd
by Jack Cashill