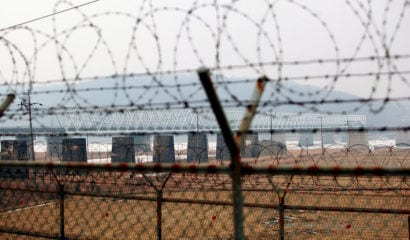 The so-called Democratic People’s Republic of Korea is impoverished and decrepit. Its people are starving and risk death to flee their tragic land. The country is virtually friendless and suffers under a bizarre system of monarchical communism. Pyongyang’s armed forces are dwarfed by those of the U.S., the globe’s premier military power.

Yet the DPRK has struck fear into the hearts of otherwise sober American policymakers and analysts. The administration announced plans to spend a billion dollars to add 14 interceptors to the missile defense in Alaska to guard against a North Korean attack. Deputy Defense Secretary Ashton Carter rushed to Seoul to consult the South’s government.

The Washington Post’s David Ignatius worried: “Counting on North Korean restraint has been a bad bet. It may be wiser to assume the worst and plan accordingly.” The International Crisis Group observed that “North Korea has taken a number of recent steps that raise the risks of miscalculation, inadvertent escalation and deadly conflict on the Korean peninsula.”

The Associated Press’s Foster Klug warned: “Recent Korean history reveals a sobering possibility. It may only be a matter of time before North Korea launches a sudden, deadly attack on the South. And, perhaps more unsettling, Seoul has vowed that this time, it will respond with an even stronger blow.”

Worse, declared defense analyst Steven Metz: “Today, North Korea is the most dangerous country on earth and the greatest threat to U.S. security.” Indeed, the DPRK foreign ministry might be proved right when it “asserted that a second Korean War is inevitable.”

The Heritage Foundation’s Bruce Klingner argued that the U.S. needed “strong military forces to protect” itself from the North and denounced planned military budget cuts as undermining “U.S. military capabilities and credibility.” The ICG urged “U.S. officials, including the president,” to reaffirm “that the U.S. will fulfill its alliance commitments, including robustly against any North Korean military attacks.”

In Metz’s view this would be no minor affair. Rather, “The second Korean war would force military mobilization in the United States. This would initially involve the military’s existing reserve component, but it would probably ultimately require a major expansion of the U.S. military and hence a draft. The military’s training infrastructure and the defense industrial base would have to grow.”

It’s a frightening picture, and it seems almost as wildly overblown as the DPRK’s rhetoric. After all, though the North’s wild gesticulations are unsettling, this is the seventh time Pyongyang has renounced the 1953 ceasefire reached. War has yet to erupt. While one cannot take anything for granted, there’s no evidence that Kim Jong-un and those around him have turned suicidal after the death of his father.

The DPRK’s behavior almost certainly reflects other considerations. Almost alone is Sheila Miyoshi Jager of Oberlin College, who argued that the North’s “apocalyptic threats” are primarily intended for a domestic audience. She added: “it would be a mistake to read into them anything more than the noises of a dying regime that clearly recognizes the writing on the wall.”

However, there’s a more basic question. Why is any of this America’s problem?

One need not blame the U.S. for the DPRK’s behavior to recognize that America is involved in Korean affairs as a result of its own choosing. If Washington did not guarantee the ROK’s security and station troops in the South, the North’s behavior would be largely irrelevant for the U.S.

America’s involvement in the Korean peninsula dates to the end of World War II. Washington’s intervention in the Korean War grew out of the larger Cold War. The U.S. stayed for decades because the South remained vulnerable to a threatening North allied with both Maoist China and the Soviet Union.

None of these circumstances still apply.

The division of the Korean peninsula lies almost seven decades in the past. The circumstances which drew America into that region’s affairs are long over. The Cold War ended more than two decades ago; the struggle between the two Koreas is no longer tied to a global struggle with a dangerous hegemonic adversary. War on the peninsula would be a humanitarian tragedy, not a strategic disaster.

Washington’s ally has more than recovered from the Korean War. The ROK has sped past the North on most measures of national power. Indeed, South Korea has some 40 times the GDP and twice the population of the North. Thus, the South is capable of defending itself.

Nor do American forces on the Korean peninsula perform any larger role, such as helping to contain the People’s Republic of China. Seoul doesn’t mind being defended against unlikely contingencies involving the PRC — which has no interest in attacking the ROK, a country that would not be easy to swallow, let alone digest. But Seoul would not make a permanent enemy of its neighbor by helping America to protect, say, Taiwan. A U.S. request to use South Korean bases in a war against Beijing for such a purpose likely would lead to a collective nervous breakdown in Seoul.

It is time for U.S. forces to go home. And to terminate the American security guarantee for the ROK. Washington is broke. It can’t afford to continue providing defense welfare to populous and prosperous allies. And there’s no longer any security justification for U.S. taxpayers to subsidize South Korea’s defense.

If Americans came home, Pyongyang no longer would be interested in the U.S. The Kim family dictatorship is criminal, not stupid. It threatens Washington because Washington’s military confronts North Korea’s forces. Otherwise Kim & Co. would have as much interest in America as it has in Europe.

The U.S. still would have a general interest in encouraging nonproliferation. But a nuclear DPRK is primarily a problem for its neighbors, not America. There’s no reason for Washington to take on the thankless task of dealing with Pyongyang.

Indeed, Washington should inform Beijing that if North Korea develops a growing nuclear arsenal America has no objection to South Korea and Japan creating countervailing weapons. If that displeases China, so what? Let the PRC apply real pressure on Pyongyang to abandon the latter’s nuclear plans. In any case, Americans should wash their hands of the issue.

There may be no more frustrating experience than dealing with the DPRK. The U.S. has many problems, but North Korea need not be one of them. Washington had reason to get involved in Korean affairs in 1945, but the justification for doing so disappeared years ago. It’s time to transfer the problem of the radioactive North to others.