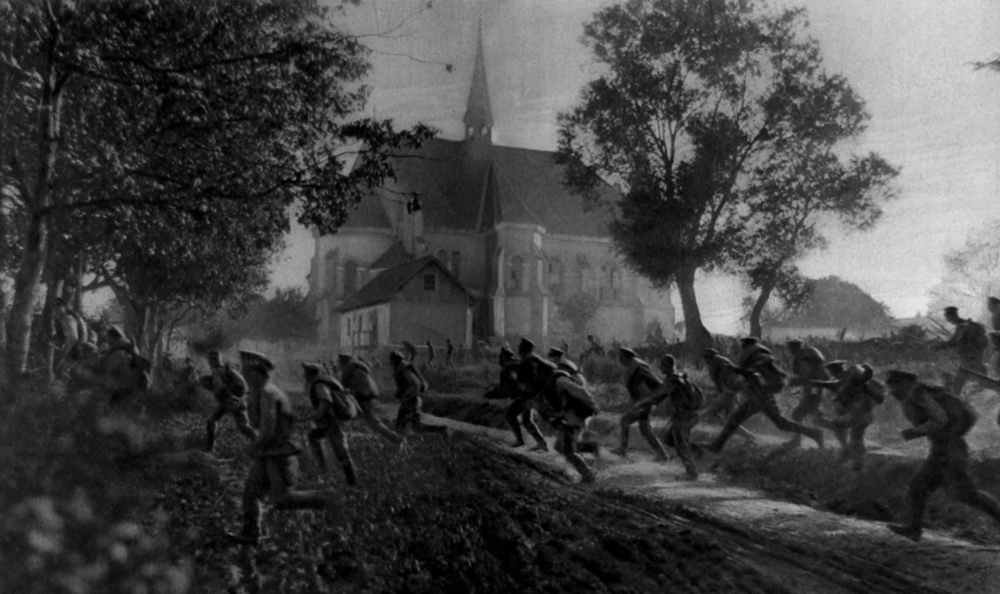 The day of the Biden inaugural, President Trump’s splendid 1776 Commission, a robust response to infantile progressivism’s juvenile 1619 Project, was ditched by the new White House. It was hauled away with the bust of Winston Churchill.

If that wasn’t nauseating enough, this reporter has learned that Biden administration officials are quietly planning a downright revolutionary replacement: something called the 1917 Project, headed by a new 1917 Commission.

Our crackerjack staff at The American Spectator got their hands on a hot five-page memo left at the Starbucks on King Street in Old Town Alexandria by a sloppy DNC intern evidently more focused on her grande skim latte. The memo touts the bold creation of “1917 Project,” to be surreptitiously launched by Biden–Harris loyalists by “late February.”

The memo breathlessly rattles off the “victories” achieved by what it instructively calls “Our November Revolution” — that is, the Democrats’ November 2020 election victory.

“The dates are almost preternatural!” says the memo excitedly. “Our November 2020 victory came exactly 100 years after the Bolsheviks seized power in Russia in 1917 (plus three years)!”

The author, who sources say is a high-level DNC official, hailed the Democrats’ “massive seizure” — that is, their seizure of the Senate, the House of Representatives, and the White House. The memo states that a representative of each of these “cells of powers” has been appointed as honorary co-chairs of the 1917 Project Commission. The co-chairs are tri-chairs — three chairs. The memo refers to them as “The Troika,” and it names names. The Troika will be led by what the memo refers to as “comrades” Bernie Sanders, Alexandria Ocasio-Cortez, and Kamala Harris.

Conspicuously absent from the memo is the name of Joe Biden, though there is an unmistakable reference to “the Big Guy” and also to someone referred to as (especially curious) “Trojan Horse Joe.”

The Kerensky reference struck this reporter as well. The memo speaks ill of Kerensky (i.e., Biden): “We’ll get this babbling, drooling Kerensky to sign our decrees for our executive orders and five-year plans, and then we’ll strangle him — strangle him like a babe in a cradle!”

The five-year plan, of course, goes beyond a single four-year term. These new Novemberists have their eyes fixed on a longer horizon. The 1917 Project is structured in a way that seeks Joe Biden’s quick signatures and then promptly moves forward past the old man.

“If I was Joe Biden,” says my analyst friend (after a fourth or fifth Martini), “I’d get myself a food-taster, fast. And I’d make sure that someone else starts my car in the morning. And I sure as hell wouldn’t let Kamala push me around in my wheelchair, especially past a flight of steps…. Incidentally, how many sets of staircases are there in the White House?”

Most alarming about the Democrats’ 1917 Project, at least to this reporter, is its sheer audacity. That bravado is seen in at least two references in the document — a quote from Bernie Sanders and a halting statement about Ocasio-Cortez’s Green New Deal.

It is not entirely clear which “Party” Sen. Sanders is referring to.

The memo contains scornful language about Donald Trump and his supporters. Sanders growlingly refers to Trump as “the slimy capitalist shark from Mar-a-Lago” and his MAGA supporters as “stupid kulaks.” Interestingly, the old Trotskyist from Vermont dismisses the January 6 Capitol building incident as “amateurish.” He sniffs and boasts: “Lenin would have eaten those clowns for lunch.”

As for the Green New Deal, the memo echoes Ocasio-Cortez’s call in February 2019 for a “massive transformation of our society … at a scale not seen since World War II.” It underscores the congressgirl’s goal to “build out high-speed rail at a scale where air travel stops becoming necessary.”

The memo quotes a blank-faced Ocasio-Cortez asking Kamala Harris: “How long would it take the Biden Department of Transportation to build a railroad from New York to Paris and from LA to Tokyo? Because I don’t think anyone should be flying anymore, except for us.”

Harris was said to have cackled, “I’ll talk to Joe.”

The New York Times has been reportedly briefed on the plan, as the Troika seeks the eager endorsement of the Times’ editorial board. According to the memo, “The Times is concerned that an endorsement of the 1917 Project might hurt its unimpeachable objectivity as a nonpartisan newspaper that would never endorse a Democrat proposal.” The Times has, however, suggested that Nikole Hannah-Jones — the dimwitted dunderhead behind the incomprehensively idiotic 1619 Project — be added to the Troika, but DNC head Tom Perez said that such an addition would require changing the name of the Troika to the, uh, well, he wasn’t sure.

“You can’t call a four-person thing a troika,” he bitterly complained.

That same objection was expressed by a confounded Ocasio-Cortez, who was frustrated by the math. “Are we talking about three or four people heading this commission?” she puzzled. “This is so hard! I hate math!”

The vice president was generally described throughout the discussions as in a “nasty, foul mood” — irritable, surly, angry. She also barked at Bernie, calling him an “old cracker.”

Bernie cooled the situation by grumbling that the “petty bourgeois concerns” of his “two dedicated comrades” paled compared to the “concerns of the Revolution.”

The memo ended with a rallying cry for unity from Sanders: “Trotsky said that the revolution never dies. We have before us, comrades, a vast field to permanently sow the seeds of revolution. As Chuckie Schumer says, America is now ours to fundamentally transform. Viva 1917!”

It is 1917 all over again to the Democrats. Thus they bring us their 1917 Project. It is a perfect complement to the Left’s babyish 1619 Project. If two things could ever be called Dumb and Dumber, here they are.

I will continue to brief readers as I learn more — nay, as America learns more — about the Democrats’ revolutionary new project. For now, I need another drink. A really hard drink.

George Jean Nathan is a longtime contributor to The American Spectator. He can be reached for comment at McSorley’s Old Ale House in New York City’s East Village.