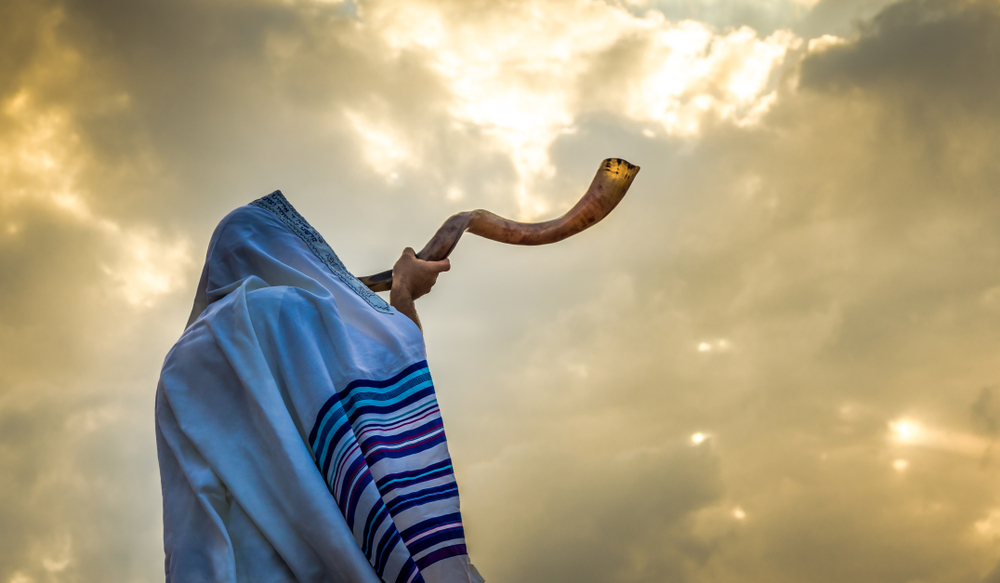 In one of the early Honeymooners episodes (an eight-minute skit, before Audrey Meadows joined), Ralph Kramden (Jackie Gleason) suspects his wife, Alice, is cheating on him (she is actually secretly meeting a jeweler to buy him a ring). Ever loyal but insensitive friend Ed Norton (Art Carney) offers this helpful suggestion: “Why don’t you slap her around a little to remind her what a nice guy you are?”

Jews have that sort of a relationship with the Creator. When He slaps us around, we remember how nice He is, knowing full well that we deserve much worse. But King Solomon prayed when He built the Temple that God treat the non-Jews a little better. When they ask for something nice, please give it to them right away.

On Yom Kippur, the annual Day of Atonement, we work out a deal. We beat ourselves up a little, refrain from food and drink, and in return we get to wear angelic white clothing for a day. We are restored to innocence, back to Square One on the debit side, while fully retaining our list of accomplishments on the credit side. We figure that for a good deal.

Is this an in-house arrangement, limited to the Jewish People as part of a special deal? This question was the subject of a great debate in Jewish theology, perhaps the single furthest gap between two positions anywhere in Jewish law. The debate precedes the Talmud, but is recorded there.

Namely, Rabbi Joshua ben-Hananya (about 2,000 years ago) ascribes the holidays of Rosh Hashana (New Year) and Yom Kippur (Day of Atonement), like the other holidays of the Jewish calendar, to commemorate events in Jewish history. In his view, the Day of Atonement was instituted after God forgave the Jews for building the Golden Calf when Moses seemed to be late in returning from the top of Mount Sinai. The day of judgment each year was then scheduled 10 days earlier, hence the New Year in terms of reconciling “the books” each year.

Rabbi Eliezer ben-Horkanos argues, asserting that Rosh Hashana commemorates the Creation of Man (Adam) 2,448 years earlier than the Golden Calf story! Yes, indeed, according to the Biblical record the Earth as an inhabited entity just turned 5,783 on this New Year.

Each human being is judged on performance this day, an annual review preceding the decision whether to extend the employment contract for another go-round. This is followed by a 10-day extension during which the flaws in last year’s performance are closely scrutinized, with an eye toward helping the employee craft strategies and resolutions to those shortfalls. Finally, on the 10th day, the Day of Atonement, the combination of a) regret for past errors, b) acknowledgment of those errors, and c) commitment and strategies to avoid repeating those errors effects a response from the Heavenly Court. The great Judge on high will accept the honest penitent and wipe his or her slate clean, clearing the file of all demerits. (READ MORE: A Model Woman: A Remembrance as We Approach Yom Kippur)

Rabbi Eliezer’s system was declared the winner in this debate. (See commentary of the Gaon of Vilna [1720-1797] to the Code of Jewish Law.) Thus, all of mankind participates in this anniversary and annual examination. Each of us is eligible for that chance to retroactively clean up our act.

Again, the clarified Jewish belief is that this process — and this opportunity — is extended to all humankind. The Jews wear the white suits and go to synagogue, but everyone walks out a winner. Just turn to the Creator and assure Him that you are committed to behaving virtuously in future, that you acknowledge your past vices and plan to leave them behind for the coming year and beyond.

There is plenty of rot in the world, no shortage of misbehavior, but this holiday reminds us that we need not subscribe. Yes, even you. You can be one of the good guys, and your past missteps need not steer you off the right path.

One last note. The right path is not the “straight and narrow.” Straight yes, but plenty broad enough to accommodate your individuality and creativity.