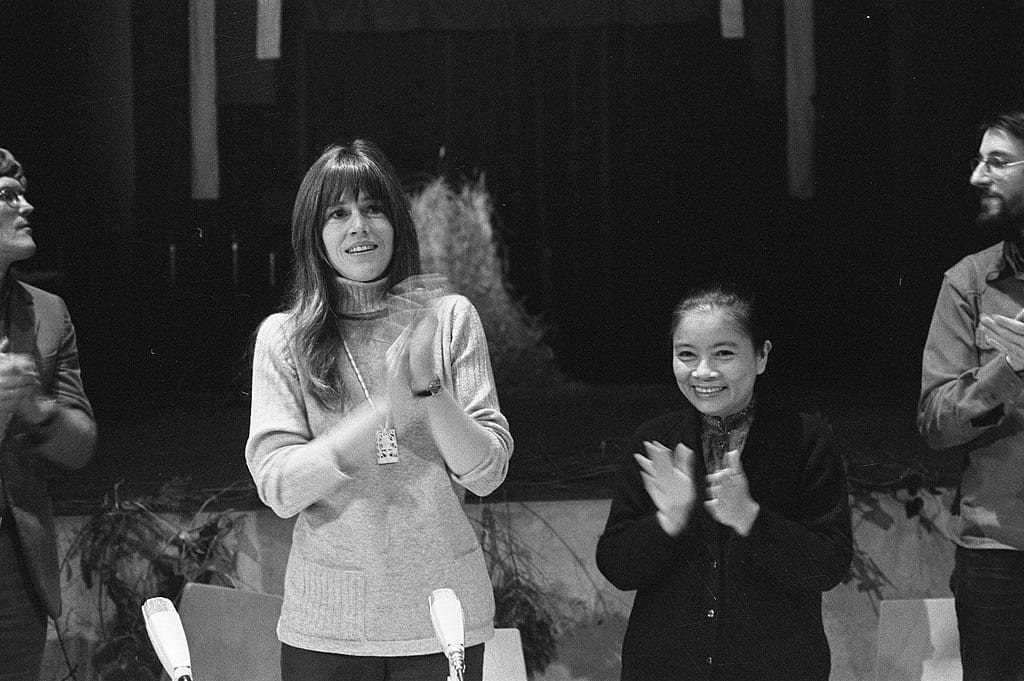 The National Women’s Hall of Fame inducts not one but two of Jim Jones’s most fervent celebrity supporters this year.

During research for Cult City: Jim Jones, Harvey Milk, and 10 Days That Shook San Francisco, Jane Fonda and Angela Davis appeared as two supporters of Jim Jones so devoted that when damning allegations sent others running from the Peoples Temple leader the pair stuck by him. But once Jones orchestrated the deaths of over 900 people in the Guyanese jungle, Fonda, Davis, and other sycophants of the psychopath developed a case of amnesia that proved so contagious that even those vehement in their criticism of the Vietnam-era radicals forget their boosterism of a mass murderer.

Greg Lazzaro, a Seneca Falls, New York supervisor, for instance, proposed to cut funding for the National Women’s Hall of Fame out of respect for veterans after it named Jane Fonda as one of its 2019 inductees. The actress traveled to North Vietnam in 1972, repeated the regime’s propaganda claims about the U.S. deliberately bombing dykes to drown civilians, delivered Tokyo Rose-style broadcasts on Hanoi radio, and, most infamously, posed on an anti-aircraft gun. His resolution to withdraw local tax dollars from the site lost by a 4-to-1 vote on Tuesday with one abstention. Fonda’s membership in Jones’s Peoples Temple did not come up.

The existence of this hall of fame may surprise. Whereas other halls of fame celebrate doing something, the National Women’s Hall of Fame honors for being something. Ostensibly, this something pertains to a lack of a “y” chromosome. In reality, the National Women’s Hall of Fame celebrates political women, especially ones who embrace left-wing politics. So, it includes Rosalynn Carter but not Nancy Reagan, Donna Shalala but not Jeanne Kirkpatrick, Wilma Mankiller but not Phyllis Schlafly, and Maya Angelou but not Ayn Rand. The hall confuses leftism for greatness. This strikes as tremendously dishonest in that the hall of fame, in its name, purports to honor women, not leftists. In September Fonda and Angela Davis, two women on the fringes of American politics, enter the hall.

Strangely, the induction of Angela Davis, whose guns somehow found themselves used in a courthouse raid that resulted in a judge’s decapitation and who later served as Gus Hall’s running mate when the Communist Party USA head ran for president, did not evoke protest as Fonda did. Stranger still, the pair’s devotion to Jim Jones goes unremarked upon.

Jane Fonda found herself “deeply moved” after attending a Peoples Temple service in 1977. She pledged herself to Jim Jones as a member of his group. “I also recommit myself to your congregation as an active full participant — not only for myself, but because I want my two children to have the experience,” she wrote the madman about 16 months prior to his masterminding the deaths of 918 people. Fonda expressed appreciation for numerous letters received by Temple congregants and for the Temple committing some of its children to attend Laurel Springs Ranch, which she had just purchased with Tom Hayden to use as a retreat for underprivileged kids. “I am in Colorado making a film — that is why you haven’t seen me or Tom,” she explained to Jones. “But when we get back, we will return to the Temple.”

Fonda’s fawning letter allowed Jones to boast of “an Academy Award winning actress joining our church” in the midst of turmoil surrounding him. Fonda’s visit to the Temple, and the letter committing herself as a Peoples Temple member, came during a summer filled with charges that Jones extorted money from followers, beat them, and acted as a charlatan in staging faith healings.

Rather than take the side of the oppressed, Fonda sided with the oppressor. When she and Hayden got back, they could not return to the Temple because the Temple had relocated to South America. In North America, the Temple sought to derail investigations into it, and used Fonda, Hayden, and others to vouch for it.

“We are familiar with the work of Reverend Jones and Peoples Temple,” Fonda, husband Tom Hayden, Harvey Milk, and other progressives publicly avowed in 1977, “and have no hesitancy in commending them for their example in setting a high standard of ethics and morality in the community and also for providing enormous material assistance to poor, minority and disadvantaged people in every area of human need.”

In Jonestown, Jones screened Fonda’s film Julia for the communards but ultimately soured on Fonda and her politician husband. No record exists of Fonda publicly criticizing Jones in the way Jones criticized Fonda.

Angela Davis, too, heaped praise upon the communist cult leader. She enthusiastically, and recklessly, delivered remarks patched through to Jonestown’s inhabitants over the concentration camp’s speakers. A figure admired by the many African-American Temple members hear-heared the paranoia of the atheist preacher who so soon led them to their deaths. Jones periodically staged “white nights” — prolonged, phony siege situations in which he instilled the idea in his followers that the Temple’s enemies looked to slaughter them — to condition Jonestown’s inhabitants to accept their deaths by their own hands (or suffer them at the hands of brutal, capitalist enemies). Davis’s remarks to Temple members came in the midst of these white nights.

Davis addressed “my friend Jim Jones” and his followers. “I know you are in a very difficult situation right now and there is a conspiracy, a very profound conspiracy designed to destroy the contributions which you have made to our struggle,” Davis telephonically informed Jonestown’s inhabitants over the concentration camp’s loudspeaker system. “And this is why I must tell you that we feel that we are under attack as well. When you are attacked, it is because of your progressive stand, and we feel that it is directly an attack against us as well. Therefore, more of us need to know that we will be carrying on this idea, that we will do everything in our power to ensure your safety and your ability to keep on struggling.”

Few struggled when Jones, just 70 days later, mixed cyanide and valium with Flavor Aid. Because Jim Jones said so, 918 people died unnecessarily. Peoples Temple survivors lived with profound stigma. Jim Jones enablers received honors. San Francisco named Terminal One at its airport in honor of Harvey Milk. Herb Caen won a Pulitzer Prize as “the voice and conscience” of San Francisco. Carlton B. Goodlett, who ran interference for Jones even after the cataclysm, lent his name to the street that gives city hall its address. For the reason of this erasure of our collective memory, I wrote Cult City. And for the reason of this erasure of our collective memory, the National Women’s Hall of Fame can honor Jane Fonda, so enamored with Jim Jones that she joined Peoples Temple, and Angela Davis, who lent her voice to the soundtrack of paranoia that ultimately brought death to so many of her admirers in Jonestown, with induction in September without public uproar.

When a Hall of Infamy opens for halls of fame that corrupt their intended purpose, the National Women’s Hall of Fame deserves a plaque.