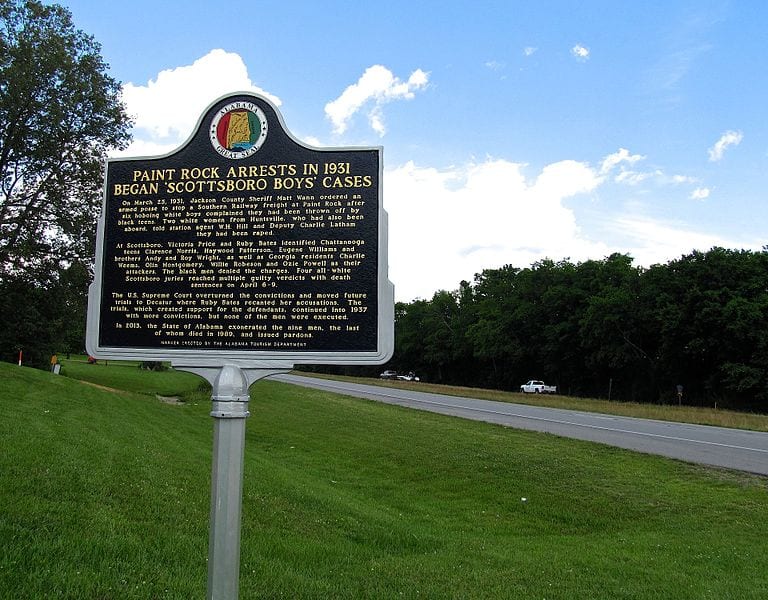 Over the weekend, a throng of angry protesters gathered outside the Capitol Building with signs and t-shirts touting a new battle cry: BELIEVE WOMEN. It’s a slogan that took off with the #MeToo movement, but it’s in hyperdrive right now.

The left found this slogan useful in serving its latest political purpose: an attempted takedown of Brett Kavanaugh. According to the new mantra, women never lie about sexual abuse, and thus anything and everything that Christine Blasey Ford alleged of Brett Kavanaugh was, ipso facto, accurate. Every charge she leveled must be believed, because women do not lie about sexual assault.

Well, here I would like to interject to remind liberals of one of their favorite historical morality tales: What about the case of the Scottsboro boys? And therein, what about Victoria Price and Ruby Bates?

Recall, liberals, that this has been one of your sacred cows for many decades. As a public service, I herewith share the story:

On March 25, 1931, two white women, Victoria Price and Ruby Bates, claimed that they had been gang-raped by nine black teens along the railroad from Chattanooga to Memphis. The boys had hopped a train ride, as had the two girls, who were with two white boys. A fight broke out inside the train car, with the white boys tossed off, leaving the white girls and black boys together. The white boys informed the nearest stationmaster that they had been in a fight with the black boys. The stationmaster took quick action. At the next stop, a town called Paint Rock, Alabama, a militia/posse took the law into their hands and “arrested” the black boys, transporting them to jail cells in nearby Scottsboro. The charge was that they had raped the white girls.

As news spread, enraged whites gathered outside the jail, ready to form a lynch mob. The governor of Alabama called in the National Guard.

Thus ensued a whirlwind of complications, from miscarriages of justice to incompetence to retractions. The attorneys who defended the boys were judged too old or too drunk. The boys themselves did not always help their cause: one alleged that everyone was guilty except for himself; two others confessed but later withdrew their admissions, saying they had confessed under physical duress; and the remaining six pleaded innocence.

Not calming the storm was a racist jury, eager to execute the boys. Even as the prosecution argued that the youngest should get life in prison rather than capital punishment, the whites pressed for the gallows for the entire group. All were convicted and sentenced to death.

The story was far from over. A mistrial was declared, appeals were rapidly set in motion, and newspapers began reporting that the two girls were not pure lambs but, rather, Tennessee prostitutes. Yes, prostitutes.

A second round of trials commenced in March 1933.

In the most sensational development of the second trial, Ruby Bates recanted her earlier testimony, claiming she and Victoria Price had not been raped, and had concocted their story out of fear they might be charged for a federal crime because they had crossed state lines while practicing an “immoral” form of business with the white boys; the prosecution contended that Bates was lying, and had been paid off. The jury again voted for conviction, but the judge vetoed.

The case of the Scottsboro boys became a crusade and cause célèbre for the left, especially the communist left. Communists adopted the Scottsboro case as a major campaign to recruit blacks to Communist Party USA. In one particular instance, their success was sensational: CPUSA’s cynical Scottsboro campaign caught the attention and began drawing into the Communist Party a young journalist and editor in Atlanta named Frank Marshall Davis, who decades later would become a mentor to a Hawaiian adolescent named Barack Obama. Yes, Barack Obama, America’s first black president. (I address this in great detail in my biography of Davis, The Communist.)

So, how does this square with the left’s BELIEVE WOMEN movement today? What does a righteous progressive do with the Scottsboro case now, given the new refrain that women never lie about sexual assault? How to reconcile the Scottsboro boys with the Ford-Kavanaugh case?

Well, truth be told, with the ideological perversities and pathologies of the left, this one can be (partly) tidied up with some nifty identity-racial politics. Here you go: the Scottsboro boys were black men, whereas Brett Kavanaugh is a white man, and a pro-life white man, and a conservative Catholic, and seeking to fill a crucial Supreme Court seat that could threaten the left’s holy grail: Roe v. Wade. Thus, Kavanaugh is a complete reprobate, never to be believed. By contrast, on the left’s ideological totem pole, the Scottsboro boys assume, by nature of their skin color, an elevated victim status that compels them to be believed, just as Kavanaugh’s position at the bottom rung of the pole (near the slimy pond scum) demands a verdict of presumed guilt.

For the confused, or unanointed, just ask a Millennial college grad. This is what your children learn in our universities with your life savings. This is the price you pay for their indoctrination.

But while those curious mental gyrations help a liberal navigate how and why Brett Kavanaugh must be presumed guilty and the Scottsboro boys presumed innocent, it does leave the messy problem of what to do with the left’s new dogma that women never lie about sexual assault.

Again, what about Victoria Price and Ruby Bates?

Yes, yes, I know — they were white southerners. That’s a definite bottom-dweller on the totem pole. But still, they were women. And women, we are told, quite categorically, must always be believed. And one of these two women admitted to lying. Both, at one point, reportedly lied about being raped.

So, liberals, especially those of you dominating our universities, how will you reevaluate the Scottsboro case in light of your new-fangled political sloganeering in October 2018? I’d like to be in the Gender Theory classroom at Swarthmore or Yale when the gals take up that one. Then again, maybe not.