Arts and Letters,Top Story Coronavirus Shutdown,Netflix,Social Distancing Wishing for a ‘Self Made’ Haircut - The American Spectator | USA News and Politics
Menu
Arts and Letters
Wishing for a ‘Self Made’ Haircut
A Netflix show based on the life of Madam C. J. Walker is much better than most of our hairstyles right now.
by Leonard A. Robinson
Octavia Spencer in “Self Made,” now on Netflix (IMDB.com) 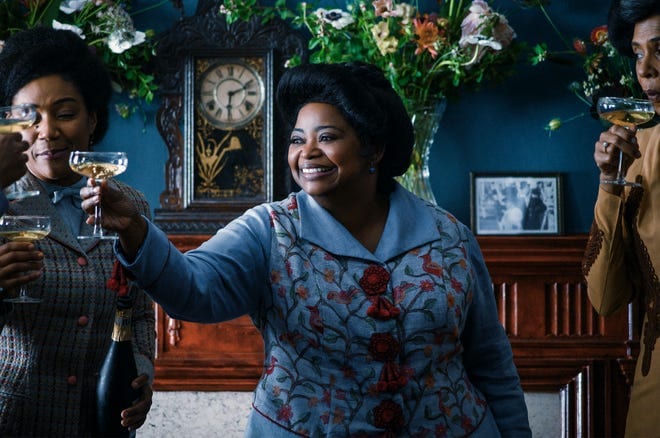 It’s day who actually knows of coronavirus quarantine, and my housemates and I are making our plans for once this is all over.

Our wish list is quite humble. We just want a night at the pub a few blocks north on Charles Street in Baltimore, a trip on the commuter rail to nearby D.C. to visit our returning friends, an end to anything relating to Zoom, and, in my case, the pleasure of a fine haircut.

But thanks to Ms. Rona, also known as COVID-19, that’s not possible right now. So at her and others’ insistence, I instead watched Self Made, the widely popular Netflix miniseries inspired by the life of Madam C. J. Walker.

Self Made follows the entrepreneurial journey of Walker, born Sarah Breedlove, a working-class laundry woman with a dream of helping black women grow and nourish their hair. Her journey begins as a consumer of the products of Addie Monroe, a light-complexioned black woman who has crafted her own hair growth regimen. A true believer, Breedlove wants to sell the product to empower other black women but is consistently stopped by Monroe for not being “attractive,” or of light skin tone. Enough of this leads Breedlove to become Monroe’s fiercest competitor. Breedlove moves to Indianapolis and risks it all to expand her company, earning her a reputation and new name, Madam C. J. Walker. The Madam faces pressures both internal and external, ranging from self-doubt and an adulterous and unmotivated husband to bigger issues, such as sexism and racism. The show culminates with her at the helm of an empire, confronting the end of her life and her legacy.

Since its mid-March release, various critics have ranked Self Made among the top 10 new shows on Netflix. Octavia Spencer (Truth Be Told, The Help) is passionate and convincing as Walker. Casting Kevin Carroll (Bloodline) as Freeman Ransom, the trusted adviser and counsel to Walker, was also a brilliant choice. Beyond those two, unfortunately, much of the acting was subpar or the result of bad casting. One example is comedian Tiffany Haddish as A’Lelia Walker, the Madam’s daughter. The role seemed forced; Haddish was out of her element.

The show’s writers seemed intent on portraying the story as a catfight between two black women with not-so-subtle nods to skin tone fueling their fire. Meanwhile, the writers were overzealous to include some LGBT spin by making A’Lelia Walker appear to have bisexual or lesbian tendencies.

Neither of these claims is rooted in historical fact, and neither effectively conveys the actual brilliance of these three pioneering women.

Self Made’s Addie Monroe (Carmen Ejogo) is a fictionalized portrayal of Annie Malone, a black cosmetic industry leader and mentor to Walker. In Self Made, Walker is not allowed to sell Monroe’s products because she is not deemed “attractive enough.” But in real life, Walker worked as a salesperson for Malone until the two had a dispute. To add insult to injury, the show’s claim that colorism ruined their relationship carries little weight considering that Monroe was also dark-skinned.

A’Lelia’s sexuality is another element that has little historical basis. Historians have noted that Walker was known for her extravagant Harlem parties, which frequently included gay and lesbian guests, such as Langston Hughes and Mabel Hampton. But no evidence exists to support her being lesbian or bisexual.

Hollywood should have known better than to be so reckless with Walker’s history. The colorism trope opens bitter wounds in the black community, tracing back to the crack of the plantation master’s whip and continuing to present-day beauty standards. The show’s creators also should have also known better than to conflate the experiences of two distinct minority groups, a choice that cheapens the unique experiences and progress made by both of them. A’Lelia Walker’s accomplishments — serving as a confidant to her prosperous, pioneering mother and leading her company as a black woman at the turn of the century — are tremendous enough without adding sexuality into the mix. Meanwhile, this ahistorical portrayal diminishes the struggles of black LGBT women of the time period, including those who attended Walker’s parties, by simply fantasizing their experience upon someone else who never experienced their struggles.

We, as blacks, deserve better from Hollywood in its presentation of our heroes. And we should demand better.

But on the bright side, the film rightly presents Madam C. J. Walker as an unabashed capitalist. She is laser-focused on achieving the needs of her sisters through customer service, innovation, and Randian-like determination in confronting challenges, whether competition or unnecessary barriers. Spencer’s performance as Walker pushed me to my seat’s edge, much like my first reading of Ayn Rand’s The Fountainhead. Her uncompromising dream of building a factory, and later an empire, was similar to Howard Roarke, The Fountainhead‘s protagonist, who dreamed of being a pioneer in architecture. Roarke told his naysayers, “That’s not the point. Who will stop me?” In one scene, Walker’s husband asks her how big she plans to grow. She replies, “As big as Rockefeller and Carnegie combined.” Oh, how inspiring!

Yet Walker never allowed her ambition to defeat her benevolence, which fueled her desire to not only create products for black women but also lift their standards of living by creating jobs and economic opportunities for them. This would come at a cost of support from some, such as civil rights leader Booker T. Washington, who believed that black economic advancement efforts should uplift black men before black women.

This alone makes the show worthy of a raise of that early afternoon glass of the alcoholic beverage of your choosing.

And while I can’t yet get that haircut, I just might order some of Madam C. J.’s shampoo. It’s the best I can do for now.

Leonard A. Robinson writes from Baltimore. He is the editor of the UB Post, the student newspaper of the University of Baltimore.