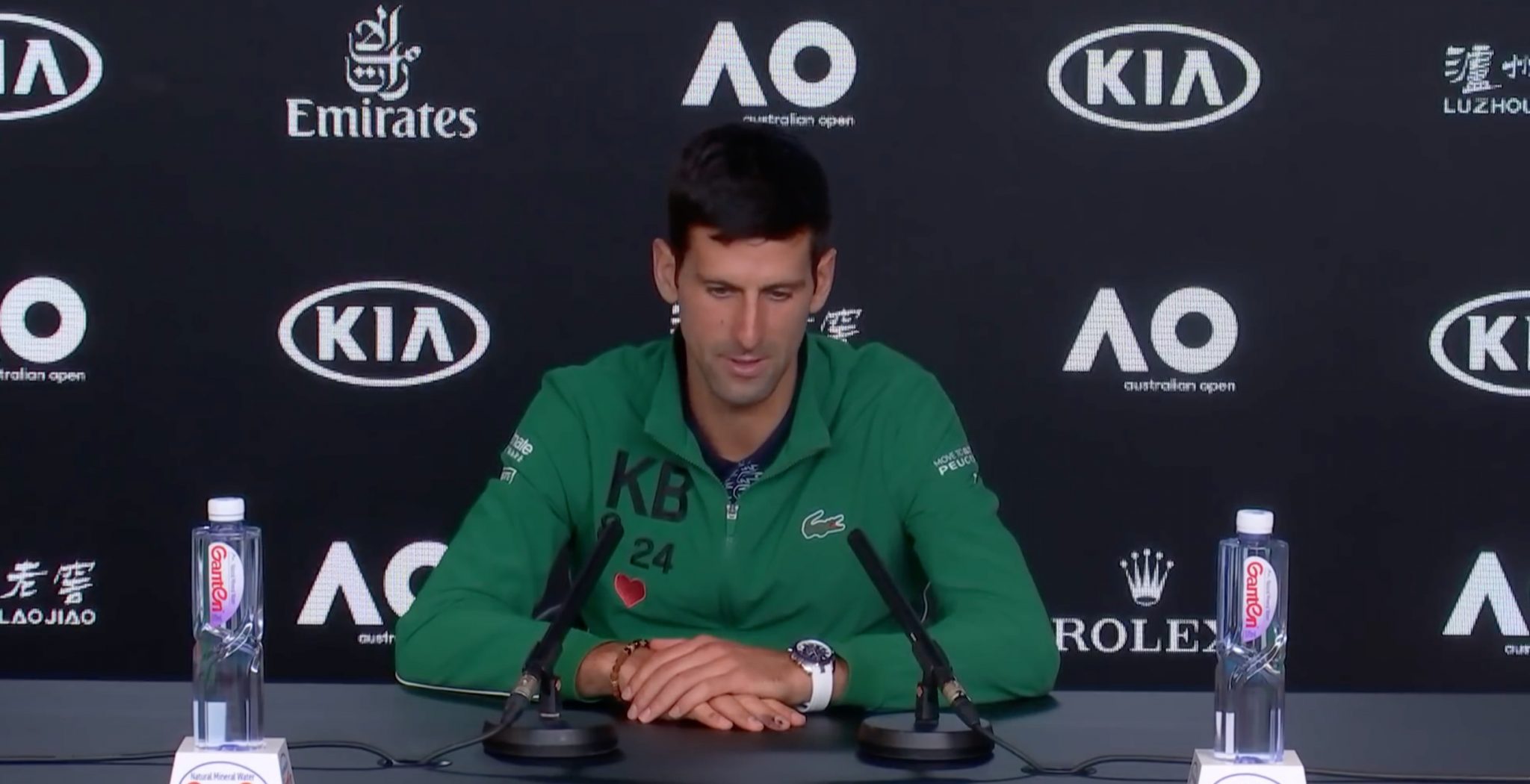 Down one set to two, Novak Djokovic was three games away from losing the fourth and with it his bid for an eighth Australian Open trophy.

The trophy is called the Norman Brookes Challenge Cup, named after a great Australian sportsman who, among other things, won the title at what then was called the Australasian Championships, as well as two titles at what were called, as they still are, the Championships, without further detail. These are the ones at Wimbledon, of course. And the 1914 edition, which Brookes won (his other win was in 1911), was held between the last week of June and the first week of July.

The other memorable event of that fortnight was, unfortunately, the assassination in Sarajevo of a ranking member of the Austrian Hapsburg family. This precipitated a chain of events that caused Brookes to be mobilized in the service of the British Empire for the next four years, during which there were no major tennis tournaments in England, or Europe. The Australasian was contested in 1915, then suspended until after the Great War. (The U.S. Nationals and the World Series were played throughout.)

The Treaty of Rapallo, in 1920, acknowledged the national identities of Serbia and the other little Balkan countries that had been under Hapsburg rule (after subjection under Ottoman rule), but the coming decades would be unhappy and unstable, and the half century of Communist rule ended in an appalling civil war.

Novak Djokovic learned to play tennis against walls that were pockmarked by bombs and bullets, on makeshift courts improvised in old hangars that were still standing, during the last period of Balkan mayhem, when the Clinton administration intervened to put an end to it with air power, instead of — arguably — minding long-term U.S. strategic interests. It may be surmised that is why he said, upon receiving his eighth Brookes Cup, that there are more important things than tennis tournaments.

He referred to the terrible bush fires that have ravaged southeastern Australia and that came close to forcing the tournament’s cancellation due to atrocious air quality. He mentioned the vast losses, property and plant and animal life — and of course human life. The players and Tennis Australia (Australia’s USTA) kicked in with generous donations to support rescue and rebuilding; Djokovic mentioned this somberly and with restrained emotion, and he seemed to be saying — you cannot really be sure, watching from so far away — that when you do your very, very best in sports, as he did this past fortnight, you are showing how important but also how impossible it is to do so well in human affairs, which never end decisively as games do.

Djokovic early in the tournament remarked that the campaign to rename Margaret Court Arena at Melbourne Park, because the legendary Australian disapproves of h*m*s*x activity, is foolish and an affront to freedom. Such notables as tennis legends John McEnroe and Martina Navratilova, who are commentators for tennis media, had staged a two-person demonstration to demand the name change, and Djokovic said this was nonsense; she is entitled to her opinions and the monument to her career should not be swept into a memory hole due to current fashions. Tennis Australia took a rather wishy-washy position on the matter, but there evidently are no plans to “cancel” Mrs. Court, a Christian pastor in her still-active old age.

Djokovic is, for reasons I have never quite understood, the odd man out among the great players of his generation, but it could have something to do with his resolute nonconformism. He has many fans, of course, but not the global following of Roger Federer and Rafael Nadal. During the final, which he was playing against Dominic Thiem, who is from Vienna, one of the Hapsburg capitals (the other one is Budapest), he had to put up with a jeering, rowdy crowd, and once or twice he got so exasperated (shouting during a point is considered bad form in tennis) that he complained to the umpire, a Frenchman, who instead of getting the crowd under control gave Djokovic time-violation penalties.

You get the sense, though it may be just a feeling, that Djokovic views discourtesy and politically correct wokiness and all manners of silly manifestations of modern mischief as somehow related to the difficulty people have in understanding what is truly tragic about the failures of human social and political endeavors.

According to observers, Australians like to root for the underdog; that may be so, but they do not have to interfere with the upperdog to prove this. Djokovic, however, was eloquent and dignified and even grim during the trophy ceremony, though I find myself wondering how well he was understood. He is direct and straight of speech, almost taciturn, and he tends to cut an issue short rather than try to put pearls before swine.

That is how he plays. Obviously a sensational athlete, Djokovic is not, like Federer in his stylish grace or Nadal in his furious passion, a showman, or a strikingly attractive player. If you know the sport, you appreciate the genius with which he sets up his winners and counters his opponents’ would-be winners. He has perhaps the best return of serve on the tour, and he usually wins the longest rallies and catches the most impossibly placed shots, as he did on several thrilling points against Thiem.

He is the ultimate defensive-attacking player, in other words a stonewall of a backboard who knows exactly when to pounce. This is different from the purely defensive players, called grinders for a reason, who wear out their opponents, or the aggressive players, who aim to set up a winning shot as quickly as possible.

Thiem, who had beaten Nadal in the quarterfinals and Alexander Zverev in the semis, and who beat Djokovic in last year’s ATP finals, is more of the aggressive school, whose gold standard in the contemporary game is Federer. He specializes in extremely fast-paced strikes with a huge inside-out forehand that he sends like a missile into the corner diagonally opposite from where he hits it, or down the line bombs with a one-handed backhand that is a jewel of form. He came into his own in the second and third sets, using these tools to great effect, and it seemed Djokovic, known as the King of Melbourne for his dominance here (the way Nadal is called the King of Clay), might have found his usurper.

He was visibly wilting at times under the Austrian bombardment. But early in the fourth set — at 2-all as I remember, or maybe it was 3-all — he took charge. When Djokovic takes charge, he stops missing. Completely. When he nets a ball, it is truly astonishing. When he is called long or out, you immediately assume it is a bad call (there were in fact several close ones, but that is sport). After two or three games like this, it began to dawn on anyone who was watching closely that Thiem’s chance was passing. When the fifth set began, you might fairly have thought, well, maybe he will run out of steam or Thiem will have his own surge, but no. Djokovic knows what matters. And taking care of business is one of the things that matter.

Sports are great fun, a reason to love life and appreciate human playfulness — like opera, or ballet, for example — and professional sports can be great entertainment when their more sordid sides are overlooked or concealed; but what matters, what matters, as Arthur Ashe said, is that “the doing is often more important than the outcome.” That is taking care of business.

Well, the outcome Djokovic gets is a fabulous one — as was Ashe’s, first winner of the U.S. Open of the Open era, and much more after that, on and off the courts. If you get Ashe’s point about the doing, you are likely to get the outcome you really want — to the degree that is humanly possible.

Next to the Djokovician gravitas (he also has a fun-loving side), the winner of the women’s draw came across almost as his exact opposite. Small (five seven), cute, stern in a girlish way, stamping her feet and scolding herself, Sofia Kenin was the surprise of the tournament. She beat a two-time Grand Slam champ, the engaging but somewhat inconsistent Garbiñe Muguruza, in a match that, as on the men’s side, required grit faith and commitment, to overcome a deficit, in this case the first set.

She speaks in valley-girl idioms (“I’m speechless,” “This is cloud nine”) and looks the part. But this would be to gravely misjudge her. This 21-year-old all-American Floridian who says she wants to spend her prize money on expensive presents for herself (and why not?) is one of the hardest-working, dedicated, serious athletes to emerge in the last two years or so on the women’s tour. Miss Kenin, whose parents are immigrants from Russia, instilled in her the classic immigrant work ethic. Her father drove a cab and sacrificed for her athletic development when, quite early, her talent was noticed.

Sofia Kenin plays with a consistent relentlessness. She has an astonishing court sense, and she showed it in the relentlessly consistent manner she disrupted the games of more experienced, arguably better (at this stage) players she met along the way to the final, including teen phenom Coco Gauff and top-seed (and local favorite) Ashleigh Barty. She does not know the word quit, as she showed when she faced a triple break point and recovered without flinching.

It seems paradoxical, but the single-minded obsession with being excellent that a veteran and a young newcomer demonstrate on the tennis courts is just the quality we need to grasp how important it is to stay on the task of making things better — including when that means deliberately eschewing making things better in the name of virtues invented for the day.