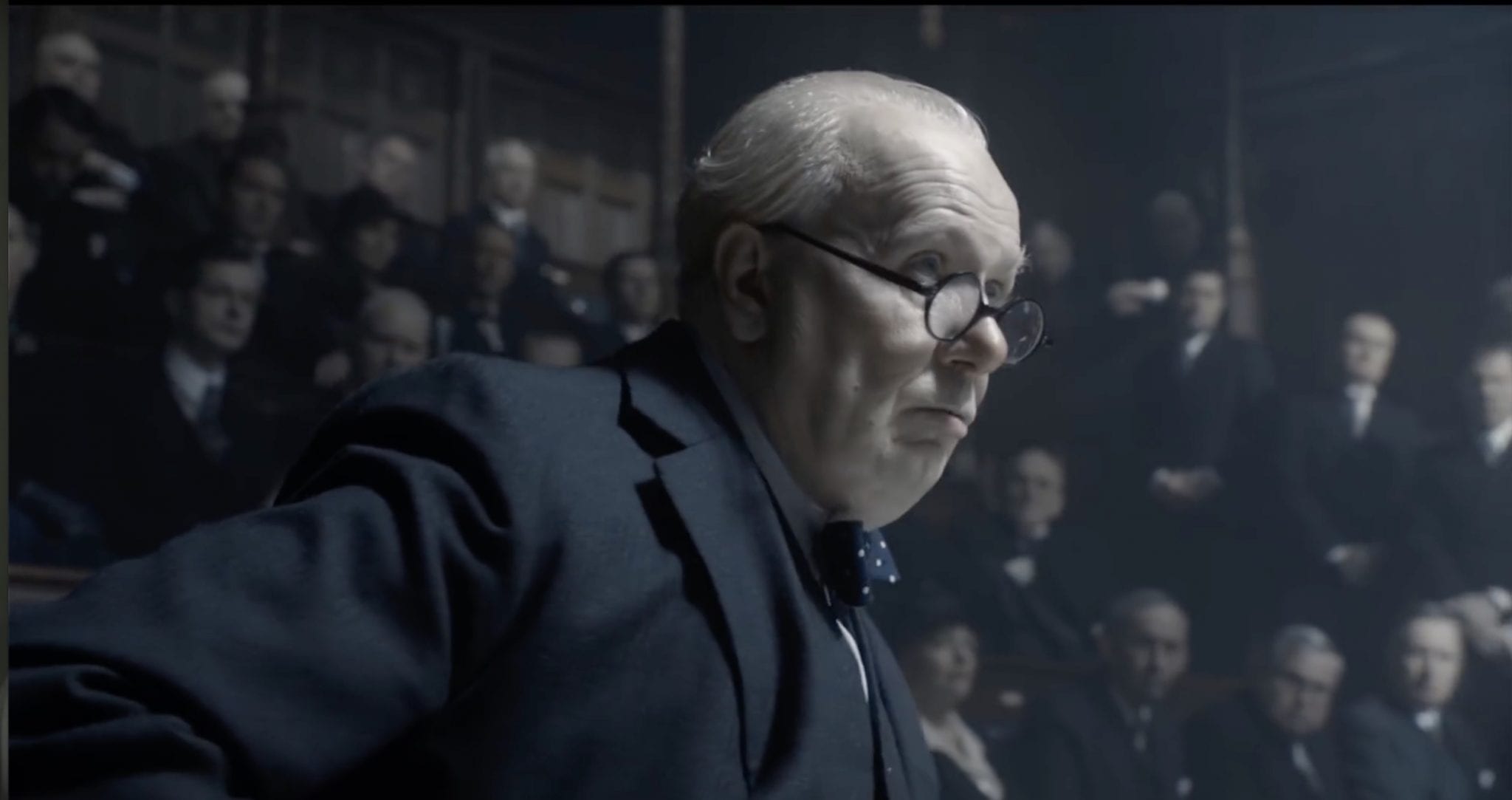 Last Saturday I dropped off my two oldest sons and their friend at the theater. I planned to kill a couple of hours at the bookstore, on my laptop, at a coffee shop, whatever. When I got out of the car the balmy two-degree temperature in Pittsburgh prompted second thoughts. Instead, I strolled into the theater complex, looked around, and saw a poster for Darkest Hour. I vaguely knew it was a movie about Winston Churchill. I bought a ticket and went in.

I was hooked from the opening scene: a grim, dank, colorless House of Commons, nothing like the fun and festive place you see when you click on C-SPAN on Sunday night to watch “Question Time” with the prime minister. This was interrogation time with the prime minister, with Neville Chamberlain in the dock on May 9, 1940, while Labour Party opposition leader, Clement Attlee, barked at him for his failed accommodation of Adolf Hitler.

Attlee, of course, would one day go on to nationalize everything his greedy Fabian socialists could get their covetous government hands on, and Churchill in this film nicely refers to him as “that wolf in sheep’s clothing, Attlee.” At this moment, however, Attlee was spot-on. Chamberlain had fully earned the evisceration.

It’s after this opening that we see Winston Churchill for the first time — instantly riveting because of the incredible performance by the leading man. I had walked into this movie cold (literally), with no clue of the actors, the writer, the directors, the producers. Not until the credits did I find out who played Churchill. It was Gary Oldman. I would have never guessed it. Oldman was flatly amazing. If he could play Churchill like this, he could play damn near anyone. (What’s next for Oldman — Margaret Thatcher, Theresa May?) If Gary Oldman doesn’t win an Oscar for this performance, then the Oscars are an even bigger political farce that we already thought. (Why would he? Neither Oldman or Churchill are gay, after all.)

There are plenty such kudos to go around for this film. Among the characters and those who played them: Churchill’s wife (Kristin Scott Thomas), Anthony Eden (Samuel West), Neville Chamberlain (Ronald Pickup), Viscount Halifax (Stephen Dillane), King George VI (Ben Mendelsohn), and the lovely young woman (Lily James) who had the lead female role as Churchill’s secretary/typist. The writer was Anthony McCarten, whose script was superb.

McCarten and director Joe Wright delivered so many fine scenes, from the tragedy at Calais to the capitulation of France. As to the latter, in one painful exchange Churchill asks French Prime Minister Paul Reynaud incredulously, “Tell me how you plan to counterattack.” To Churchill’s horror, the leader of France responds: “There is no plan.” Reynaud and one of his lackeys sniff at the Brits for being so “delusional.” Churchill is less delusional than aghast. “France must be saved!” he insists. That, unfortunately, was not the French plan.

Darkest Hour depicts all of this so beautifully and so, well, visually, which history books and newsreels cannot or could not do.

But above all, the takeaway from this film — and from the Churchill experience — is an enduring historical-moral lesson: you cannot negotiate a just peace with a brutal aggressor. Savages are not appeased. This is poignantly captured when Churchill snaps at Viscount Halifax and Neville Chamberlain: “You cannot reason with a tiger when your head is in his mouth!”

What makes that moment and this overall film so valuable is the paramount fact that Churchill is shouting at Halifax and at Chamberlain, both Conservatives, both looking to negotiate “peace in our time” with Hitler, and neither of which had quietly disappeared when Churchill took the helm on May 10, 1940. We tend to have a nice, tidy, black-and-white view of what happened in Britain when Chamberlain stepped aside. We assume that Chamberlain vanished and then Churchill vanquished; there was hence an immediate change in tone, policy, direction, vision.

This film, however, shows what really occurred, namely: Chamberlain and Halifax became part of Churchill’s official War Cabinet and remained tacit leaders of the Conservative Party, while the disrespected Churchill was merely a compromise prime minister leading a precarious coalition government in which the Labour Party accepted him more than his own Conservative Party had. Thus, Churchill still had to deal with intense pressure to settle with Hitler, as Chamberlain and Halifax pushed him relentlessly to “negotiate terms” with the Nazis — with Benito Mussolini their recommended splendid mediator. It was a lousy situation for Churchill, who faced a possible vote of no confidence if he couldn’t keep Chamberlain and Halifax on the reservation.

That ugly internal battle, which is the core of the movie, went on for an extraordinarily decisive month of May 1940, when Churchill soul-searched, struggled, lost sleep, drank, nearly wobbled, and Britain could have caved. Ultimately, Britain stood strong because Churchill — in his courage — refused to stick his head near the mouth of the tiger. Churchill said “Never!” to the Führer. That course both inspired his people and had been inspired by his people. As to the latter, the film’s most touching (possibly apocryphal) moment transpires when Churchill hops out of his chauffeured vehicle and disappears to “the underground” to take the subway to Westminster, where he rubs shoulders with everyday Brits and is bucked up in his inner conviction to resist rather than placate the Nazis. They inspired him.

And the rest is history.

Churchill’s “Darkest Hour” was, in truth, a series of dark hours that lasted two or three weeks in May 1940, when Western civilization hung in the balance. He was severely tested. He responded with bouts of confidence and doubt, turmoil and inspiration, cigars and (lots of) alcohol — as Oldman shows so vividly. Ultimately, mercifully, he persevered. This powerful film portrays what he was up against and how he prevailed — a rousing lesson from the time and for the ages.