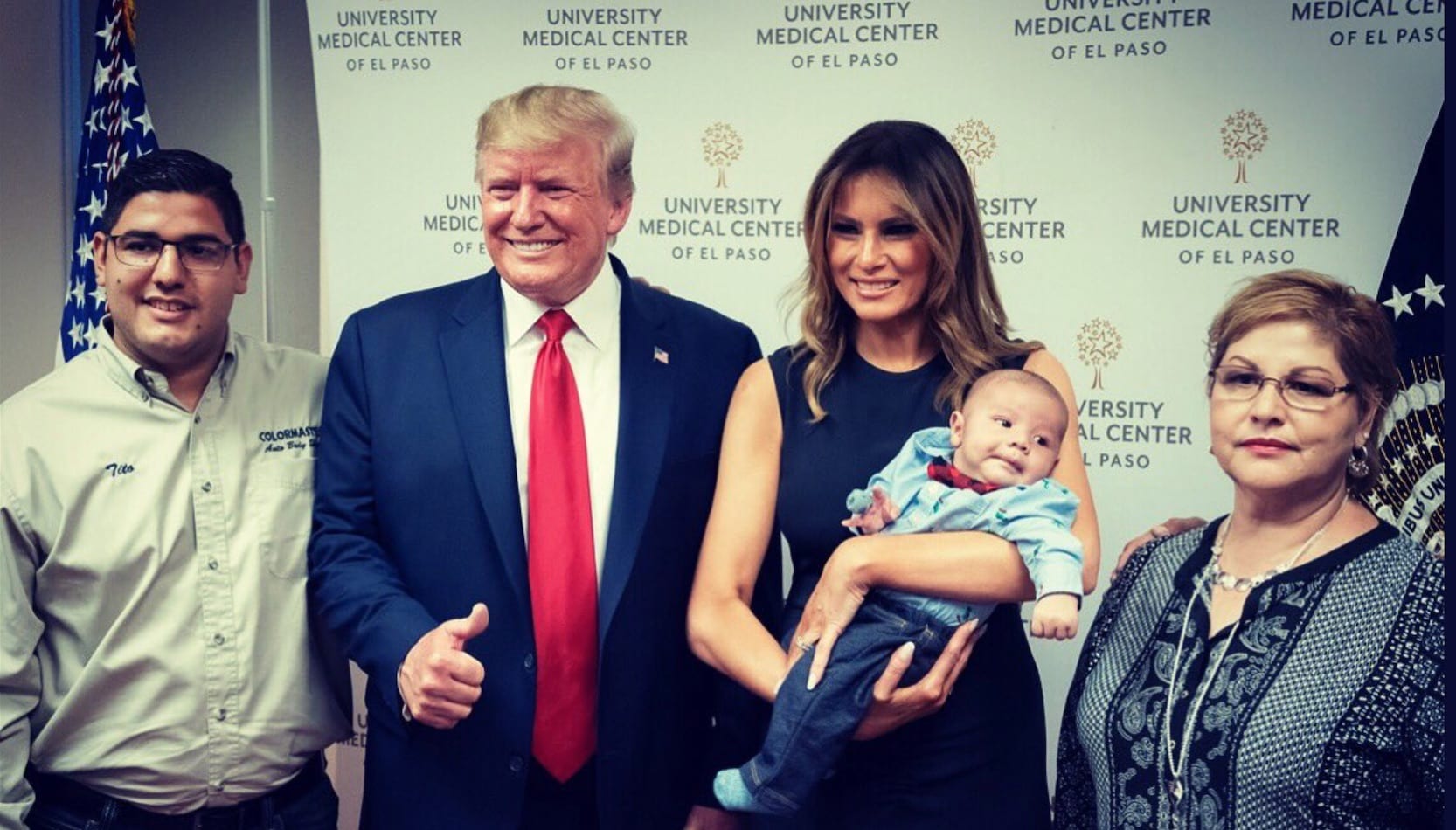 We have long ago become inured to Democratic politicization of mass shootings and the accompanying tirades against President Trump suggesting he is somehow responsible for these atrocities. Consequently, the Left’s exploitation of the recent massacres in the cause of gun control was all too predictable. This time, however, they added a new ruse to their rhetorical repertoire. After El Paso and Dayton, Democrats failed to dissuade Trump from visiting the victims, an omission they would have inevitably denounced as callous, the Left went berserk when he and the First Lady posed for a photo with an infant survivor of the El Paso shooting and two relatives.

The phony outrage erupted when the First Lady posted a tweet about the El Paso and Dayton visits that contained a photo featuring herself holding the baby, Paul Anchondo, and his Uncle Tito with his arm around the president. Why would this upset anyone? Well, it turns out that Tito Anchondo, like his brother Andre — who was killed shielding his son from the gunfire — is a Trump supporter. This photo undermines two carefully cultivated leftist myths: that Hispanics by definition disapprove of Trump and that he is a Mexican-hating racist. This was too much for the Democrats and their media allies, who, with characteristic hypocrisy, attacked Trump for politicizing the tragedies.

But as NPR reported, Tito Anchondo doesn’t see it that way and suggests that his brother would also have rejected the claim: “My brother was very supportive of Trump.” To Democratic claims that Trump’s rhetoric has incited mass shootings, he said, “I think people are misconstruing President Trump’s ideas.” He also told NPR, “We should be coming together as a country at this time instead of threatening each other with hate messages.” Anchondo told the AP on Friday that Trump “was just there to give his condolences and he was just being a human being.” The Democrats aren’t having any of this, of course. Presidential candidate Kirsten Gillibrand is all too typical:

He has created a national emergency of rampant white nationalism across the country. And I think white national terrorism is a national emergency. I think we need to blame President Trump and the rhetoric he’s used since he got elected.… And all you have to do is listen to his words to make that decision. He has berated, demeaned, devalued women of color constantly in this administration. He has used racist language and racist dog whistles on behalf of the presidency. He [said] Mexicans are rapists.

This is nonsense of course. Gillibrand, like most Democrats, has deliberately distorted Trump’s perfectly accurate assertion that criminals of all types (including rapists and murderers) are crossing into the United States via the southern border along with illegal immigrants who come here looking for work. And the Democrats are making a mistake if they insist on characterizing everyone who favors stricter immigration controls as racist. The notion that only white supremacists want to control the flow of illegal aliens into the country is not merely inaccurate, it is politically inept. Even the Nation, not exactly a trove of Trump cheerleaders, offers the Dems a wake-up call:

Trump is betting that he can again use anxieties about immigration to stoke enough class anger to win the Midwestern battleground states.… A majority of Americans — in numbers well beyond Trump’s base — also want immigration laws to be strictly enforced and the border sealed against illegal crossings. A 2018 Harvard/Harris poll reported that 70 percent of voters support more restrictive laws, with 64 percent — including 53 percent of Latinos — in favor of sending back people who cross the border without papers.

Did you get that last percentage? Latinos like Tito Anchondo and his brother constitute a majority of Hispanics. Moreover, they support Trump not by overlooking his immigration positions, but because they agree with those positions. So, Democrat presidential candidate Robert Francis O’Rourke is making a colossal blunder when he brays the following about Trump: “He’s been calling Mexican immigrants rapists and criminals.… He’s not tolerating racism, he’s promoting racism. He’s not tolerating violence, he’s inciting racism and violence in this country.” And it goes without saying that the legacy media is parroting this BS. The Atlantic published the following tripe:

If Trump had failed to visit El Paso, liberals would surely be criticizing him, rightly, for his absence. So it isn’t his presence alone that makes the photograph odious. First there are the smiles, so chipper in the aftermath of mass murder.… The photo features a baby whose parents were killed in El Paso a few days ago. The baby survived because his parents shielded him with their bodies. In the photo, he is cradled by Melania Trump. The president is next to her; both are smiling broadly and the president is offering a thumbs-up.

The best answer for Graeme Wood, who wrote this contemptible passage, was provided by Tito Anchondo, the uncle of that baby in Melania Trump’s arms, and the older brother of the man who saved the boy’s life by sacrificing his own: “Is it that hard to try and understand that a family is trying to not be sad at a moment like this? My brother is gone.” It was Tito Anchondo’s little brother who was murdered, not some faux journalist who could never be killed in a Walmart because — like Peter Strzok — he wouldn’t be able to tolerate the “smell of Trump support.” Well, Graeme, with guys like the Anchondo brothers behind him, Trump support smells a lot like victory in 2020.