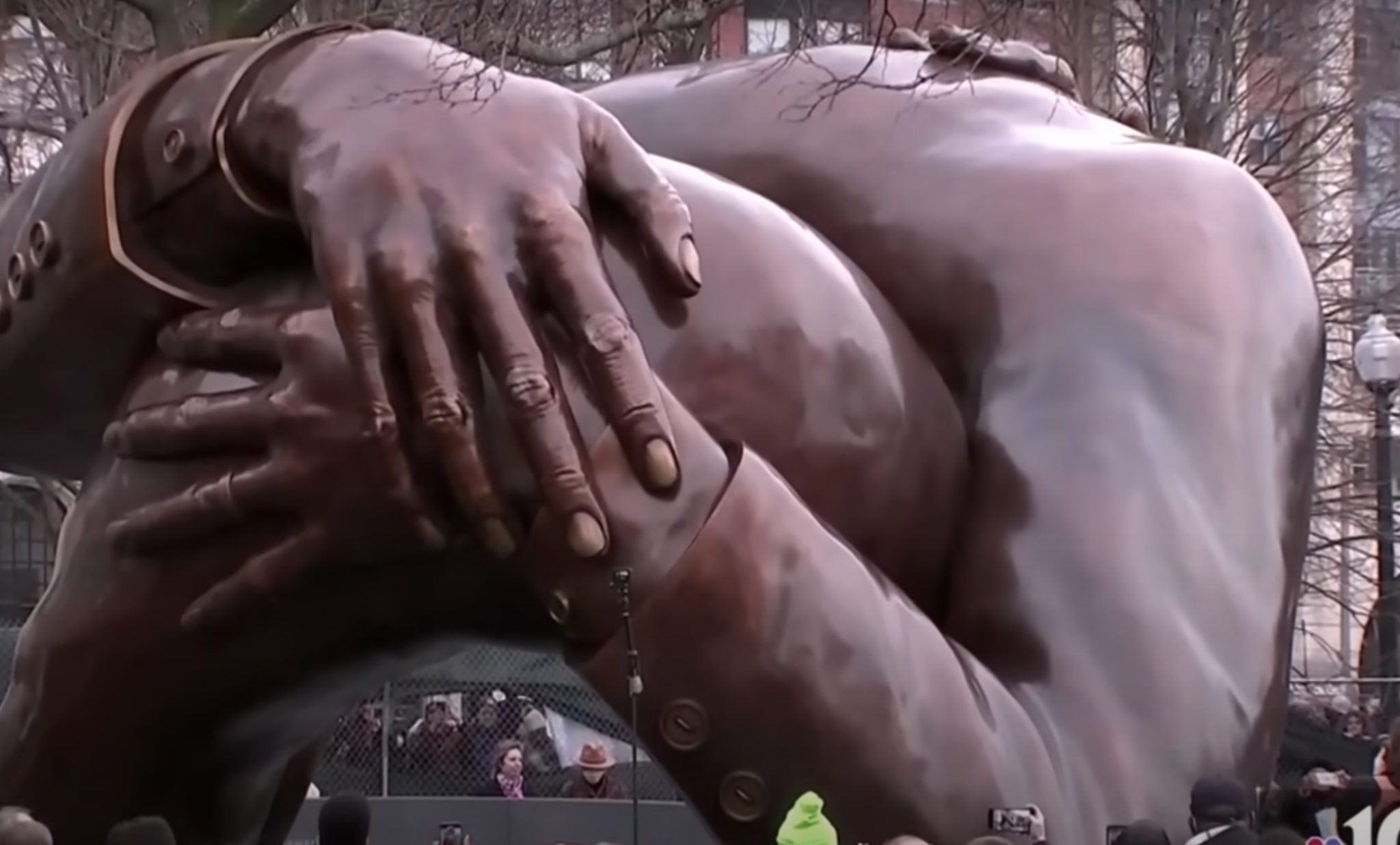 Alternatively, locals might imitate their Puritan forefathers, who essentially evicted the only European settler, William Blaxton, from his home around the present-day Boston Common for the offense of Anglicanism after he had made the mistake of inviting them to settle on the Shawmut. “The Embrace” could trace Blaxton’s path and resettlement in Rhode Island. (Perhaps beneath “the pineapple” in Providence?)

Or maybe those anonymous guys who razor-bladed Vermeer’s “The Concert” out of the Isabella Stewart Gardner Museum in 1990 might, in penance, pull a similar caper on the common.

At that great gathering of honest art connoisseurs, Twitter, critics awarded the bronze unveiled days ago neither gold, nor silver, nor bronze.

One Twitterican saw “Jeffrey Dahmer having lunch,” while another wondered, “Why did they make Martin Luther King into a huge log of $#!+”?

“My issue with the MLK ‘Embrace’ sculpture isn’t that it depicts oral sex,” @paul_hundred wrote, “it’s that it depicts two or three different kinds of oral sex depending on your vantage point, and that kind of art is gimmicky.”

Around the United States — and to some extent the world — the scrutiny intensified during Martin Luther King Jr.’s birthday weekend. But here in Boston, where passersby in one of the most heavily trafficked parts of the city look upon and then hastily look away from the sculpture daily, “The Embrace” continues to induce that face that Bruce Willis made at the end of The Sixth Sense. Bostonians, proper and otherwise, got over the architectural monstrosities of city hall, UMass-Boston, and the former East Cambridge courthouse. The Medusaesque “Embrace,” though, may require a brief embrace of sharp objects with soft eyeballs.

Like MacGruber’s tribute to “my personal hero Dr. Martin Rufus King,” the sculpture means well in a superficial way as a course of penance for past sins but ultimately insults what it seeks to honor. Martin Luther King Jr. and his wife, as photographs and eyewitness accounts prove, possessed faces and bodies and legs beyond the limbs depicted in the public art. Could the city and its private partners not afford to spring for a head atop the $10 million they paid for the alleged arms?

When they feel like it, city fathers can and do issue bans offensive to the majority — or just to a noisy minority.

A customs inspector blocked the importation of Voltaire’s Candide into the Athens of America in 1929. That year, the clerk of the licensing division, unofficially the city censor, banned performances of Eugene O’Neill’s Pulitzer Prize–winning Strange Interlude (which catapulted the popularity of an obscure restaurant in nearby Quincy called Howard Johnson’s when it hosted performances). Vice squad crackdowns on the Howard Athenaeum for featuring the likes of the appropriately named Irma the Body in the 1950s led to its shuttering after more than a century in business. Late Mayor Thomas Menino declared in 2012 Boston that there was “no place” for Chick-fil-A, whose plans to open a restaurant (this finally happened in 2021) he ironically labeled as an “insult” to “our city’s long history of expanding freedom.”

If Boston Brahmins could impose their taste by removing Francois Rabelais’s Gargantua and Pantagruel from bookshelves, then why cannot they revive this Banned in Boston ethos by exiling this eyesore to the same warehouse to where they removed the headless Christopher Columbus? If not, penitent critics of 2020’s statuary murderers plaintively ask: Where have you gone American Taliban, a city turns its lonely eyes to you?

History shows the Boston Common to be the site of uncommon atrocities. There, self-righteous types executed Mary Dyer for Quakerism and arrested H.L. Mencken for selling a racy story. America’s intellectual epicenter of witch-hunts and Know-Nothingism erected a monument to its blindness in 2023.