The American Spectator’s Great American Saloons & Spirits columnist Kevin Kosar just published a book about Moonshine for the Edible Series. For spirits aficionados, history buffs, cooks, and fans of great writing, it’s a must buy. In fact, this book should be on everyone’s Father’s Day gift list. You can buy it here. 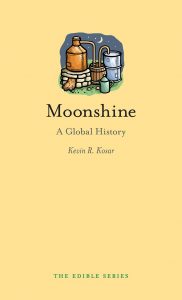 Kevin’s book is a trove of new information. Turns out, Hollywood portrays a limited view of the spirit that is a symbol of freedom worldwide. I spoke with Kevin about the book and here’s some of what we talked about.

I used to have a fantasy of setting up a moonshine still just to have my own source of booze, but the process is so complicated it seems like I need to be a chemist to do it. Why do people take the time to make Moonshine when it’s easier to make other forms of alcohol?

Kevin Kosar: Good question. Well, I guess I’d ask in response, why do folks bother to learn to fly fish and spend boku bucks on rods and equipment when they can go to a good market and buy perfectly good trout and salmon? It’s just the way people are — they like to mix their hands with nature’s bounty and produce something, whether it is knitting a scarf or wood-working one’s own furniture. Making spirits is challenging, but the rewards of getting it right are great. Seeing clean, fragrant liquor coming off the still after days of fermenting and toil is a joy.

Why would Moonshine still thrive illegally when there’s so many sources of cheap, legal alcohol in America today?

America has a remarkable selection of spirits at all price points, which has helped greatly diminish wipe the bad moonshine. A small number of desperados making cheap shine for sale still exist, but increasingly the ranks of moonshiners are hobbyists. These days, one can go on the Internet and get expert instruction on home distilling sites and YouTube, and you can buy beautiful, well-crafted stills — legally!

Should Moonshine be legalized in the United States with people being warned “Drink at your own risk?”

Yes, it should. Folks all over America are making moonshine for their own consumption. We’ve not seen an epidemic of blindness or bad things happening on account of it. So, why is it against the law? Last Congress, there was a bill that would have ended this myopic ban, but that provision has been dropped from the current version. Jimmy Carter signed a law to permit home brewing and wine-making forty years ago. I hope folks get in Congress’s collective ear and demand their freedom to distill for their own consumption be restored.

It was heartening to read that even in Czarist and communist Russia, that citizens persevered in making Moonshine. Moonshine production seems inextricably linked to the independent spirit.  Or is it just that people like being drunk?

I think freedom and the desire to be intoxicated are sewn into the soul of mankind. Heck, as I note in the book, even some animals purposely get themselves soused. Russian tsars, Cambodian commies, other power-mad authorities all have tried to stop people from drinking. Every last one of them failed, despite employing brutal tactics. That rulers in countries experiencing radical Islam presently are trying to ban booze is just bad history all over again. Whenever government tries to stomp out drink, a black market for it arises. And people die — from gangland crime and toxic hooch — because moonshiners often care more about money than human life.

Have you sampled Moonshine from all over the world, and if so, whose Moonshine is best? Is there such a thing as a “best” Moonshine?

I have tasted a bit of this and a bit of that. I’m not sure I’d say that any one type of moonshine (eastern European rakija vs. Sri Lankan toddy) is better than any other. It all comes down to the individual producer — does he or she know how to distill well? Are good raw materials being used? So, just to illustrate — one jar of Appalachian white lightning I tried was incredibly smooth; another one I sampled tasted like acetone and made me gag.

What surprised you about your study of Moonshine?

The astonishing human ingenuity. People have taken just about any organic material — grain, fruit, root vegetables, honey, milk — and managed to make liquor from it. And the stills they have rigged up to make them are unbelievable. The book has a photograph of a still made from a clay pot, a metal tube, and an automobile tire. Inmates in prisons have employed plastic bags, batteries, stolen plumbing to distill.

Do you make your own Moonshine?  You seem to know an awfully lot about it.

Ha! No, but if I did moonshine I would not admit it. I do not need federal agents kicking down the door to my apartment and terrifying my children and old Labrador retriever.

Kevin R. Kosar is a senior fellow at the R Street Institute and the author of Whiskey: A Global History. He is the editor and founder of AlcoholReviews.com and a contributor to The American Spectator’s Great American Saloon Series.

You can buy Moonshine: A Global History here.